Rituals of sunrise and rituals of dawn, thinking of “Taixuina”

Now, more than ever, I have been thinking about the idea of escapism and a fleeing of reality, a topic I’ve been developing for some time with Taixuina, via the construction of a story based on the quest for a place that ideally represents lost paradise, an alternative solution to the civilised and capitalist reality that surrounds us and contributes to the mentality of alienation over cooperation, and the psychophysical problems engrained in the contemporary matrix.

Without a doubt what we are living through has put to test the pre-pandemic reality, which rested upon a very precarious equilibrium.

I am conscious of the fact that the idea of escaping from society has a very poignant, utopian character, precisely because there are thousands of contradictions that make its implementation difficult to realise, not withstanding the ways of behaviour that have changed and distanced mankind from its nomadic, animal and wild dimension.

We are domestic animals, far from the pastoral dimension that contributed in the creation of a harmony with the cosmos, a balance that according to John Zerzan (1999, “Against Civilisation, Reading and Reflections”) gradually cracked with the advent of civilisation.
Man is stationary, safe in a small apartment with all his comforts (for those who have them) between concrete walls, whose limits are more apparent more than ever before.

My awareness is accentuated by a reflection upon the underlying causes of this pandemic, fundamentally due to having destroyed ecosystems and the balance between man, animals and nature.

According to Mark Fisher (2009, “Capitalism Realism: Is there no Alternative?”) dystopian cinematic visions that bring man back to a primordial state after a natural catastrophe or event of mass destruction are evidence of the lack of real alternatives to the systems we have ingrained ourselves in. Does it take the catastrophic collapse of this world to be able to imagine an alternative? Yes, I think is the conclusion that most of us are coming to, and we are now looking for alternatives or escape routes. These visions become reality, no longer films or science fiction.

In my small way, now in a small apartment in Milan without a balcony or garden, I feel that on a practical and realistic level, “Taixunia” can only be reached by escaping the urban reality, away from the city and by approaching the natural dimension via contact with and respect for nature.

These photos are an attempt to “wear house plants”, this metaphorically represents the natural balance I am seeking beyond the city, and that is out of reach right now, except that feeling of being close to my house plants or by looking at the two trees outside my window, or through the simulacra of natural representation, such as the Shan Shui painting on paper which represents my ideal scenery, a window that has been in the room forever.

According to the Chinese pictorial tradition Shan Shui, a landscape is an idealised representation of a place and not true to life, the only constraint is the achievement of a feeling of harmony between the various elements represented, often mountains and streams, where the colours are approached according to a diagram that expresses the forces and balances of nature and sensations felt by the artist as he explores it. 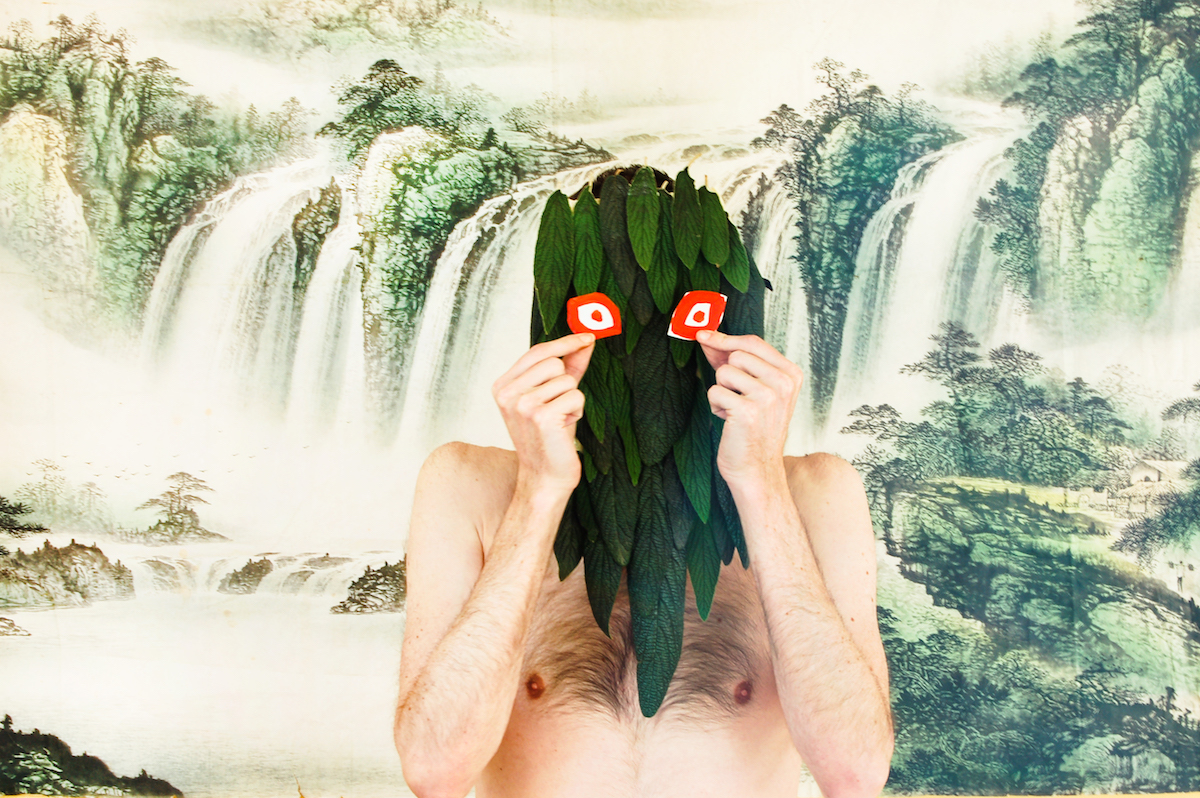 Giusy Pirrotta, Dawn ritual, 2020, Digital photo, leaves, cardboard and drawing on paper
Keep up to date with My Art Guides
Sign up to our newsletter and stay in the know with all worldwide contemporary art events
Subscribe