I was very impressed by your paintings exhibited in the exhibition. Could you tell us the story behind your work?

When the Caribbean Art Initiative contacted me, they mentioned that the curators were using the “Treaty of Basel” as an entry point for the exhibition and I didn’t know much about it. So my first idea was to read up about it and while I was doing that I was shocked by a sentence in the introduction where it was mentioned that France and Spain were signing this treaty for “peace, harmony and good intelligence” and for the maintenance of those ideals and I thought “where’s Haiti in all of this?”; they were heavily negotiating between themselves and making decisions on what was happening on the island but no-one from over there was actually aware what was happening on the island, nor France and Spain. So I was interested in imagining what peace, harmony and good intelligence meant when you are on the island, both then and now.

What I see in the painting is very different, given your explanation. I see both peaceful as well as tragic aspects in those figures…

To me it’s not about tragedy, but the struggle of daily life. It’s about going through life even when you have a heavy burden but also when you are aware of who you are or what destination you are working towards. So for me it’s about serenity, which is very simple, it’s about finding peace and harmony in your environment, with nature. So all these elements are like the present, the past, the future, with nature, with where you are. There is struggle in it, there is strength in it and its about the fight too, it’s all these things together. It’s also very local, it’s about “where you are now”.

Who is the woman with the horns in the painting?

The woman is the alter-ego version of me and I created her based upon the Father of the Haitian Revolution who is called Jean Jacques Dessalines. I just put our names together calling her Tessalines. Jean Jacques Dessalines was a fighter figure of the invisible enemy, larger than life but also very male. So when I was creating my alter-ego version I thought “where are women in the story, how do I identify, how do I make this story mine?”. Of course there are different ways in doing that, the women are female heroes but also women are there. For me the two characters in the painting are fighters in different ways; one is very obvious and wears her fighting spirit on her sleeve, while the other is a regular person, a regular Haitian who is fighting for survival, in a more understated way. 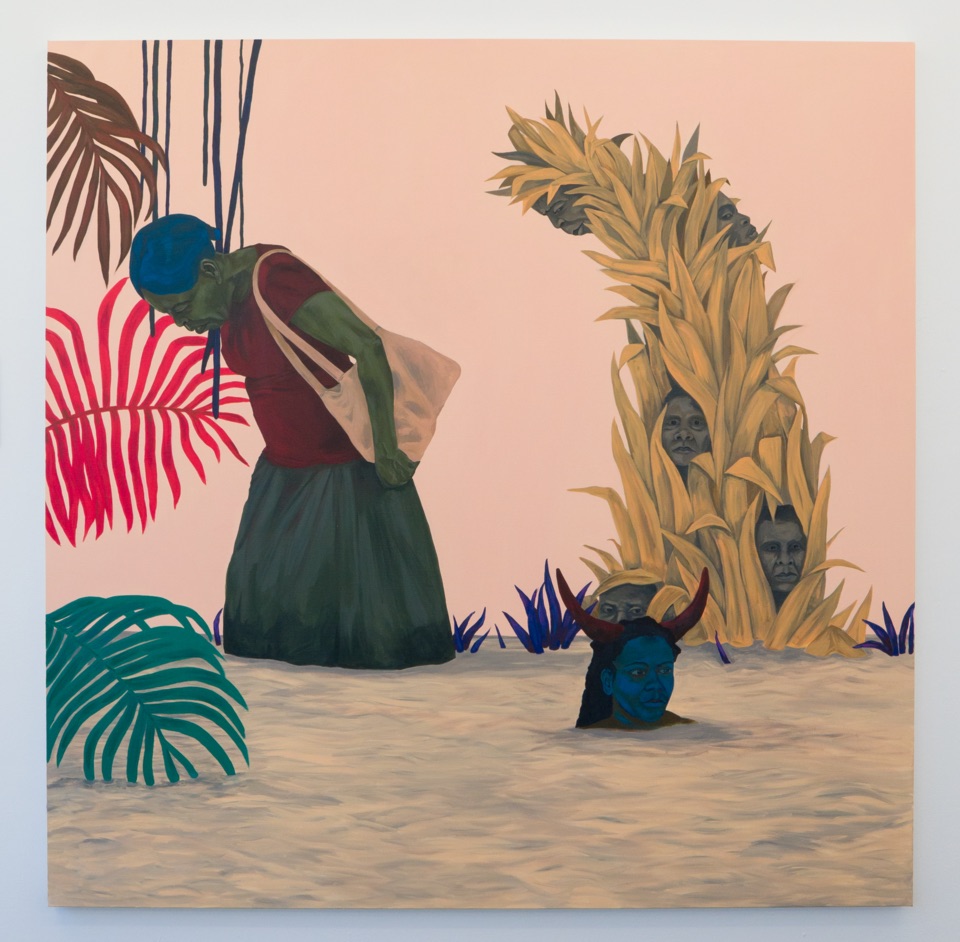 Tessa Mars, "A vision of Peace, Harmony, and Good intelligence I", 2020

How is it being a female artist in Haiti? What is the main challenge?

I think it’s the most interesting position to be in, there is so much to be said and so much that has been silenced. Art in Haiti is valued, it is everywhere and has a long history and entering into conversation with this history and making your mark is very interesting and it’s the right time to do it. Hopefully more and more women will feel comfortable enough to take up this space.

What was your most memorable experience both as an artist in Haiti and abroad?

Something I found really fascinating once during a show while I was presenting a painting of this alter-ego character, a random person came up to me and told me “Do you understand what you’ve just done?”. This person explained my painting to me but I didn’t feel like he was patronising the work, instead it demonstrated that it had deeply touched him and he was seeing more in it than I even thought there was, he gave an impressive and in-depth analysis of the colours and his interpretation of the work. It was wonderful to receive that interpretation from a person I didn’t know, a regular visitor, not someone from the art sector, just someone who felt sincerely touched by the work.
Another memorable experience happened while in the US I was giving a lecture at the University and a student raised his hand for the question: “ Why did you chose the Jean Jacques Dessalines as a figure because he killed so many people?”. To be more specific “so many white people”. And I told him that you cannot have a war for independence in the times of slavery, without death. Even today people die during war. Also I told him that you cannot censor who people identify with, you cannot ask me that question basically.

This is remind me so much of an interview with Angela Davis, back in the seventies when a journalist asked her about the violence of the revolution…she started laughing, “why are you talking about violence to me?”…

It’s true, it is very meaningful that to this day you are still presented with the same type of question, it shows that nothing has been resolved quite yet, there is still a lot of work to be done for people to understand that somethings are beyond them and I am not thinking about you when I’m doing this, that’s important for me.