Let’s go back to when we first met! We were introduced to each other by Chiara Spangaro back in 2017 whilst you were presenting The Campi, coinciding with the opening week of the Venice Biennale. At the end of The Campi exhibition we arranged two boats for an acoustic exploration through the canals of Venice and it was here I introduced you to Giorgio Righetti (President of the Associazione Vela al Terzo Venezia, who sadly passed away this May) and Silvio Testa, who both went onto become the guiding beacons for the project. We cruised around the canals of Venice in Giorgio’s beautiful boat Attilia (a bragagna, a traditional wooden vela al terzo boat). Can you tell me how it all set sail from there?

Melissa McGill: Yes, that fortuitous day! As we glided through  the narrow canals under clear blue skies in May, I asked Giorgio all about Attilia. He and Silvio generously  shared stories and details about the maritime tradition of vela al terzo. Then Silvio said “Well, I wrote a book on this, so let’s stop and get it.” (Tradizioni e regate della vela al terzo published by Mare di Carta) so we made a quick  detour to their shop on Fondamenta dei Tolentini. Silvio dedicated it then and there, and a few days later, I pored over the book  for the whole 8-hour flight back to New  York. By the time the plane landed, Red Regatta was already forming in my mind’s  eye. I was deeply moved by the way this rich sailing tradition celebrates the Lagoon and exists in harmony with its delicate environment. Connecting past,  present and future sustainably, it serves  as an inspiring example both locally  and globally. What followed was the challenging process of making Red Regatta a reality. 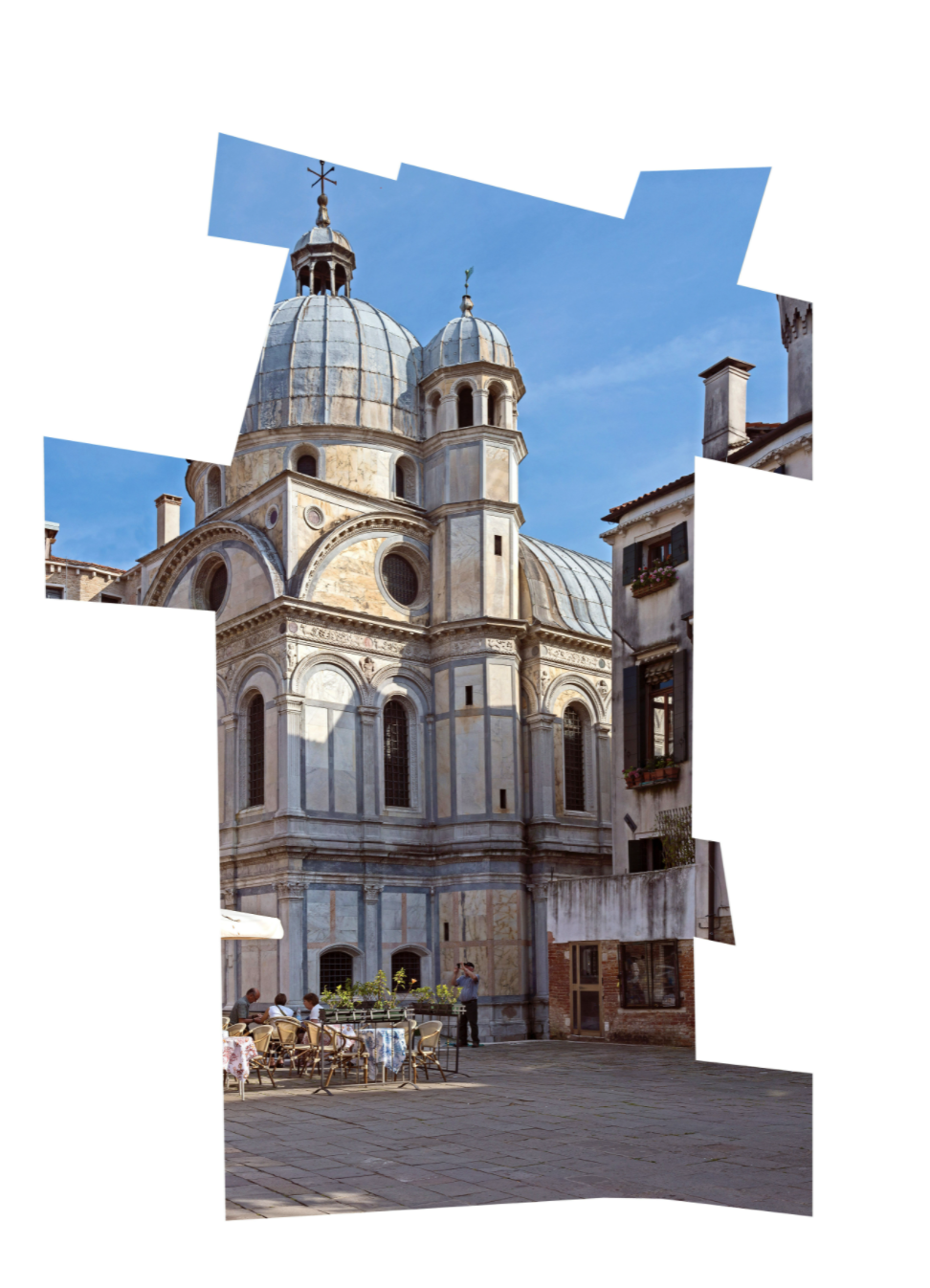 Melissa and Chiara, you have worked together on both The Campi project and the Red Regatta, when and how did you both start working together?

Melissa: We met through my long-time friend and mentor, Germano Celant, Chiara had been working with him for a long time and he introduced us. He match-made us in New York, I showed him The Campi project and I said, “I’m trying to do this,” and he said, “You should meet Chiara”, we then went to a restaurant in Union Square to talk it over, and the rest is history.

Chiara: Yes, we met in January 2017 and presented The Campi project in Venice in May, of the same year, to coincide with the opening week of the Biennale. We were looking for different spaces to activate the project in three different locations that were physically different, so as to resonate the sound differently. The three different locations were the privately owned casa-studio Scatturin, designed by Carlo Scarpa and opened to the  public specifically for this exhibition, Ca’ Tron, and Giorgio Mastinu Fine Art. This is where we first collaborated with Angela Vettese, she provided the project space at IUAV – Ca’Tron.

Melissa: There are other parallels between the two projects, Chiara curated both of them and Magazzino Italian Art co-organised and helped both projects happen. That day on the boat with Silvio and Giorgio I  wanted to hear the sounds that I had recorded in The Campi boxes with the real sounds of the city. Then we invited Giorgio and Silvio to the closing ceremony at the casa-studio Scatturin..

Chiara: So that was really the beginning of Red Regatta.

Chiara, what were the challenges you faced in curating a public art work of this scale?

Chiara: All the different phases were about learning, except the first moment when Melissa announced she wanted to do a regatta in Venice and I said yes, ok, no problem! Every phase had its difficulties, but this is interesting when you have never done work like this, and then you just discover and things progress whilst on the job. We had to learn everything there is to know about traditional sail boats, about the traditions of Venetian movements and how to speak to people, how to present the work to the municipality of Venice, and were gently guided and advised by everyone from Associazione Vela al Terzo who were really friendly, helpful and enthusiastic from the beginning. So that was not an issue. Some choices were made also upon their own schedule, because it meant doing four regattas with 52 sailors and signing a contract with each one of them committing themselves to each other and to the project. It’s also very difficult to say what was the best moment, because everything was just great, regardless of the issues we were confronted in more than one year and a half of work.

There were moments where the projects transformed and things took some time. Above all, Melissa had always imagined the four regattas in the San Marco basin, which was hard for both organisational and logistical reasons. So when we understood that the work was heading in a different direction, to be held in different places in the city it actually helped the project develop in terms of involving the community and its visibility from different places. This was in February or March 2019, four months before it was supposed to happen and was a turning point for the project, which took on an even more urban scale.

Melissa: What Chiara is mentioning is so important because this was something, that I love. By going in a different direction we activated different parts of the city, and different communities were able to see it.

Tell me about the Red Regatta sail painting workshop and what the colour red symbolises.

Melissa: This was one of my favourite part of the project, so we made 104 new sails and painted them in eight days at Spazio Thetis. Chiara, Marcella and I organised it.  This was the moment  in which Red Regatta was suddenly translated from vision to reality. The workshop was designed to build a sense of community. Approximately 25 art students from Università IUAV di Venezia took part, earning school credit for their  participation and participating sailors came along to help too. I shared the techniques developed while painting the prototype in New York. We had a lot of fun and a great  sense of solidarity quickly developed  between the young students and sailors  of all ages. The sailors helped in all sorts of ways, Nicola Zennaro, AVT’s sporting  director, taught us about the proper  handling of the sails, participated  in the sail painting day after day and taught us how to fold the sails  properly when dry. Giorgio Giacometti painted daily with the students, sharing  his lifelong knowledge of the vela al terzo traditions. Giovanni  Pellegrini, Red Regatta’s documentary  videographer, filmed the activity  and hoisted up the freshly painted sails. 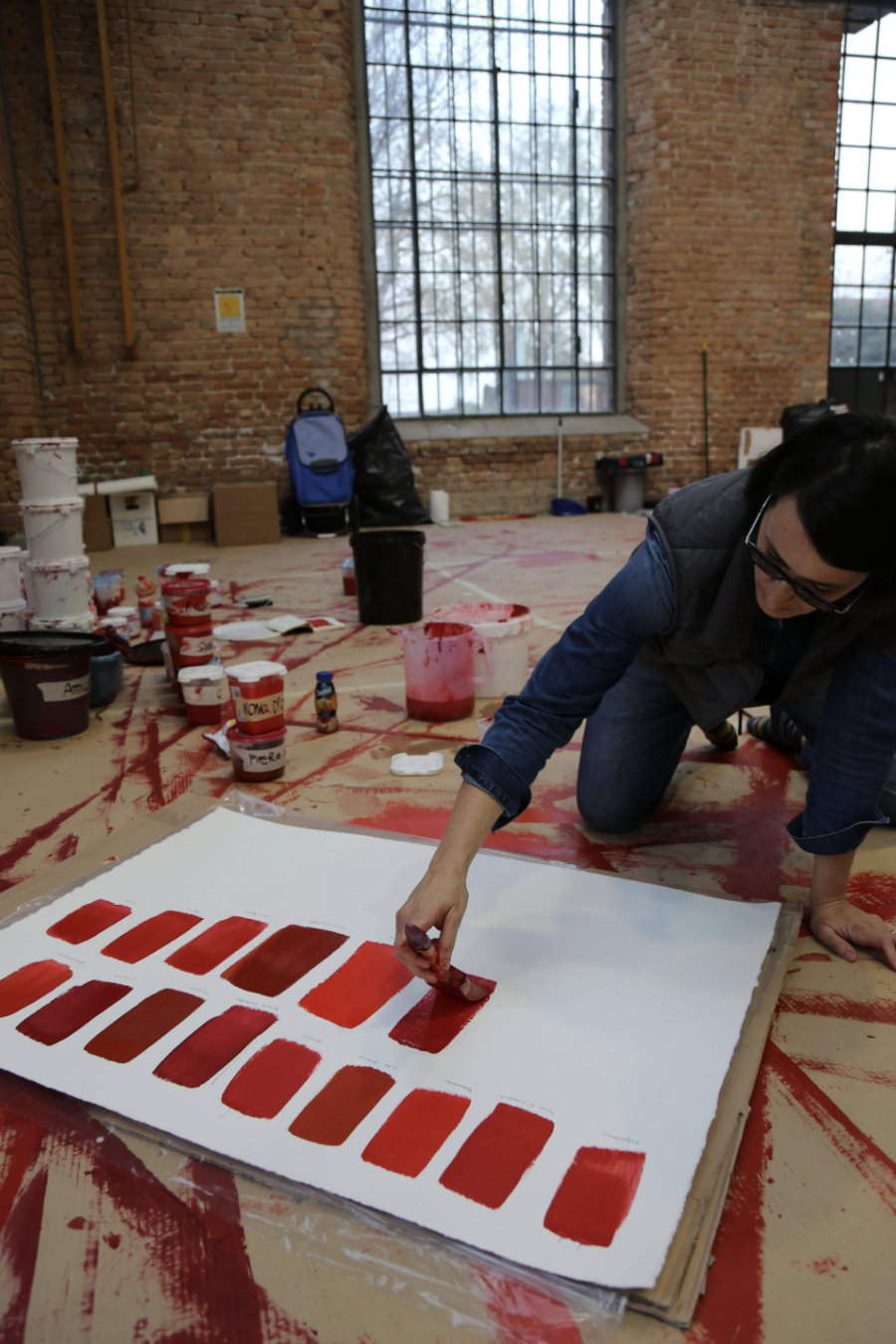 Melissa: The colour red was chosen for emotional reasons and physical reasons. Red is a colour of passion, love, life force, but it’s also a colour that signals warning and alarm. Once you start looking for red in Venice it’s everywhere, the bricks and the terracotta rooftops, and the geraniums and the Venetian master paintings.

Each participating boat in Red Regatta was given its own shade of red sails taking  inspiration from the vessel’s name  and with respect to its hull’s colour profile—for Giorgio Righetti’s Attilia, I chose a vibrant rich orangey-red,  to match its hull’s stripe, while the boat named Rosso Veneziano had sails of a warm, velvety and earthy Venetian red, and for the boat called Bocolo,  a bright rosy shade. Each sail was painted  with big expressive brushstrokes—the  sails themselves would become paintings in motion. 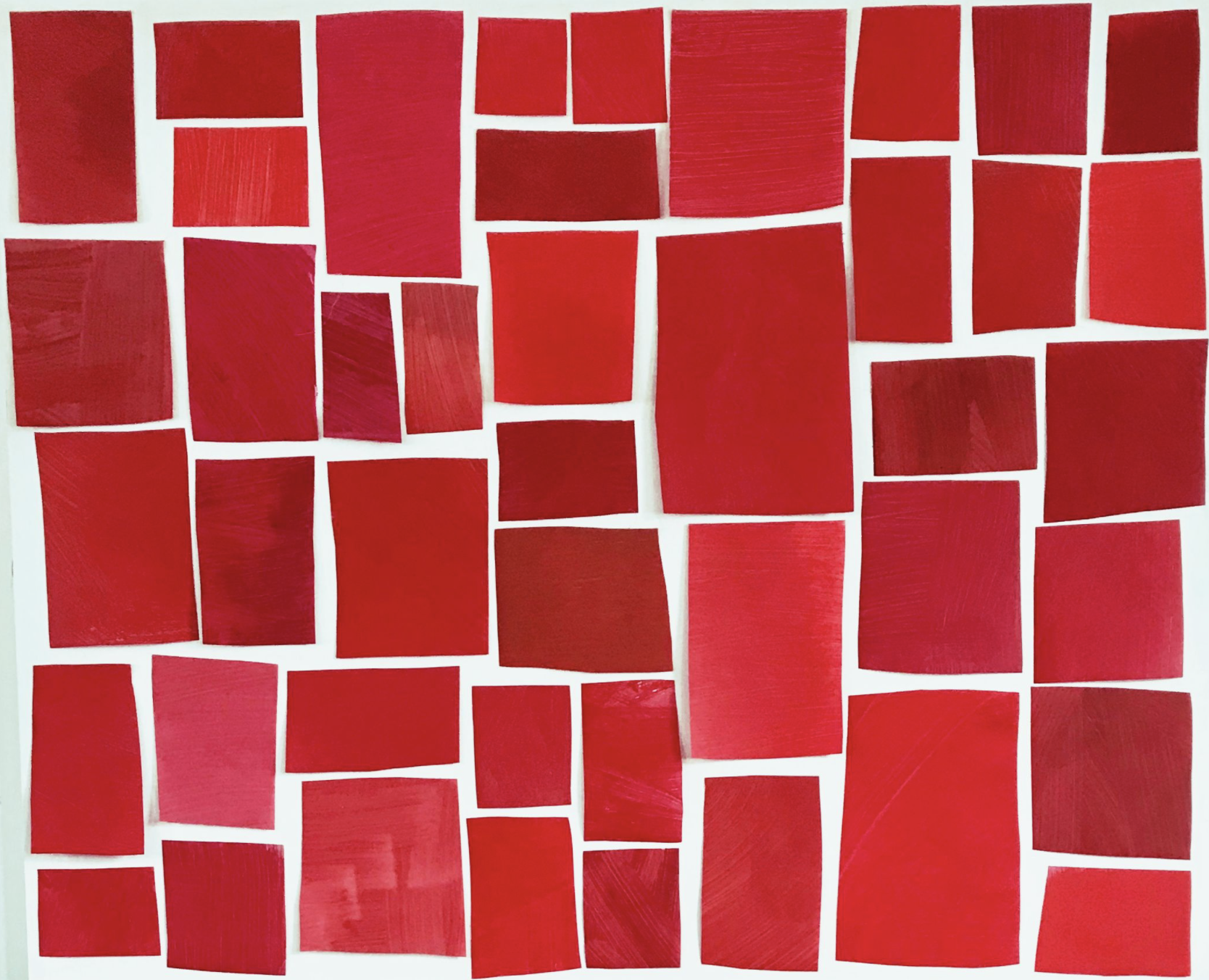 Marcella, what was your role in the project?

Marcella: I was the project manager and I started working with Melissa and Chiara, in July 2018, when I joined the team. The first meeting was at Associazione Vela al Terzo Venezia when we first presented the project to the sailors. And we had a big meeting, with them asking all sorts of questions, and Giorgio Righetti was very excited and was trying to convince them to join.

Was it easy convincing the sailors to take part?

Marcella: Yes, thanks also to the help of Giorgio and Silvio, who introduced us to the association positively and enthusiastically. We were three women in a very male orientated environment in Venice, so it was challenging sometimes, but we had good and informative questions from the sailors. Then and there, everything began.

Melissa, next week you will be opening a show, titled In Venice in London at Mazzoleni London , what will you be presenting?

Melissa: It will feature works created during different phases of Red Regatta’s timeline, hand-painted photographic renderings, my works with sailcloth and paper, photographs, an installation in glass, sculptural sound works, and a new series of watercolour studies of the Venetian Lagoon. There was a real back and forth conversation, between work in my studio in New York and the trips to Venice, the works on show are connected to that process. 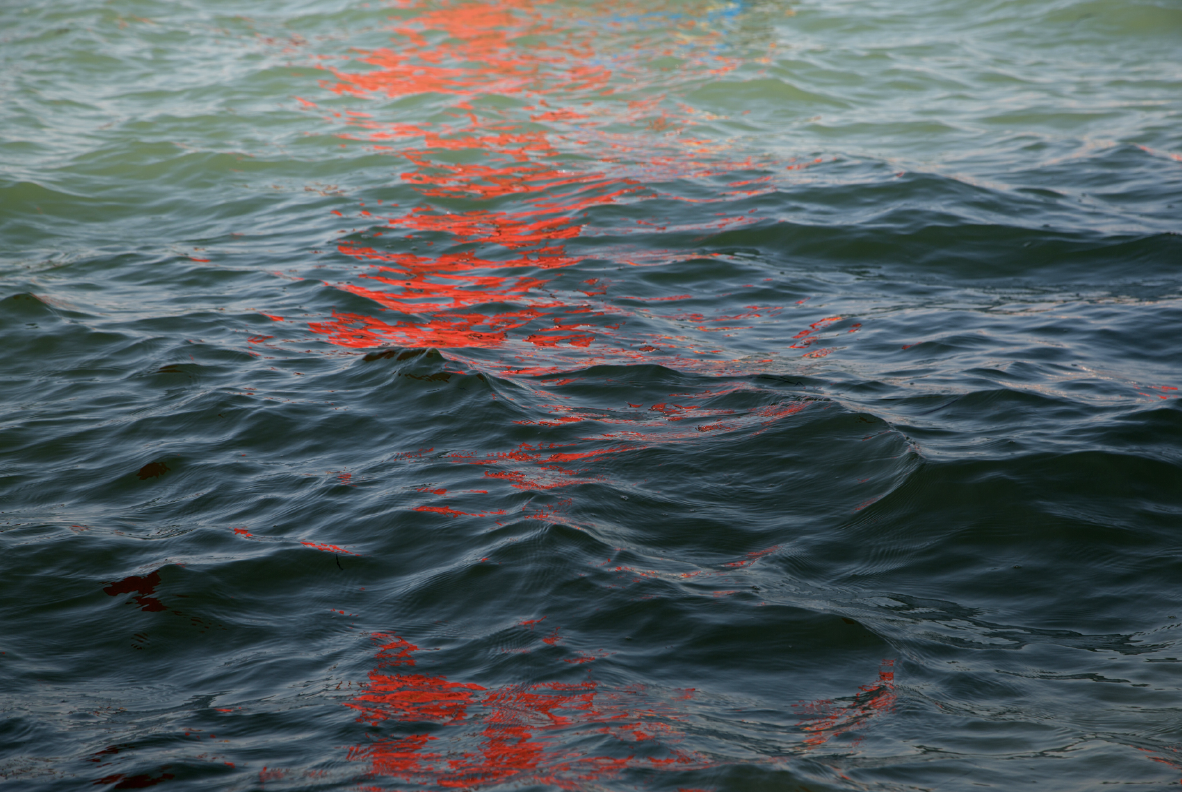 On Sunday June 20th, at 2 pm, approximately thirty traditional vela al terzo sailboats, each with hand-painted sails in a different shade of red, will set sail from the nautical headquarters of the Associazione Vela al Terzo Venezia and sail between Fondamenta Nove and Isola San Michele in Venice to celebrate the publication of the book Red Regatta (published by Marsilio). This celebratory event, organised by the artist, is dedicated to her Venetian collaborators and the city of Venice to which she has been linked since the early 1990s, in memory of our friend Giorgio Righetti, President of the Associazione Vela al Terzo Venezia, who passed away this May.

Melissa: I feel honoured to have worked side by side with Giorgio Righetti on Red Regatta. Giorgio was the perfect partner throughout the process of making this dream come true, with his passion for vela al terzo and the lagoon environment, his pride in being a Venetian citizen, mixed together with his great energy and enthusiasm. In him I found a great friend and a man of unique spirit who I will always hold in my heart…

He is always with us. 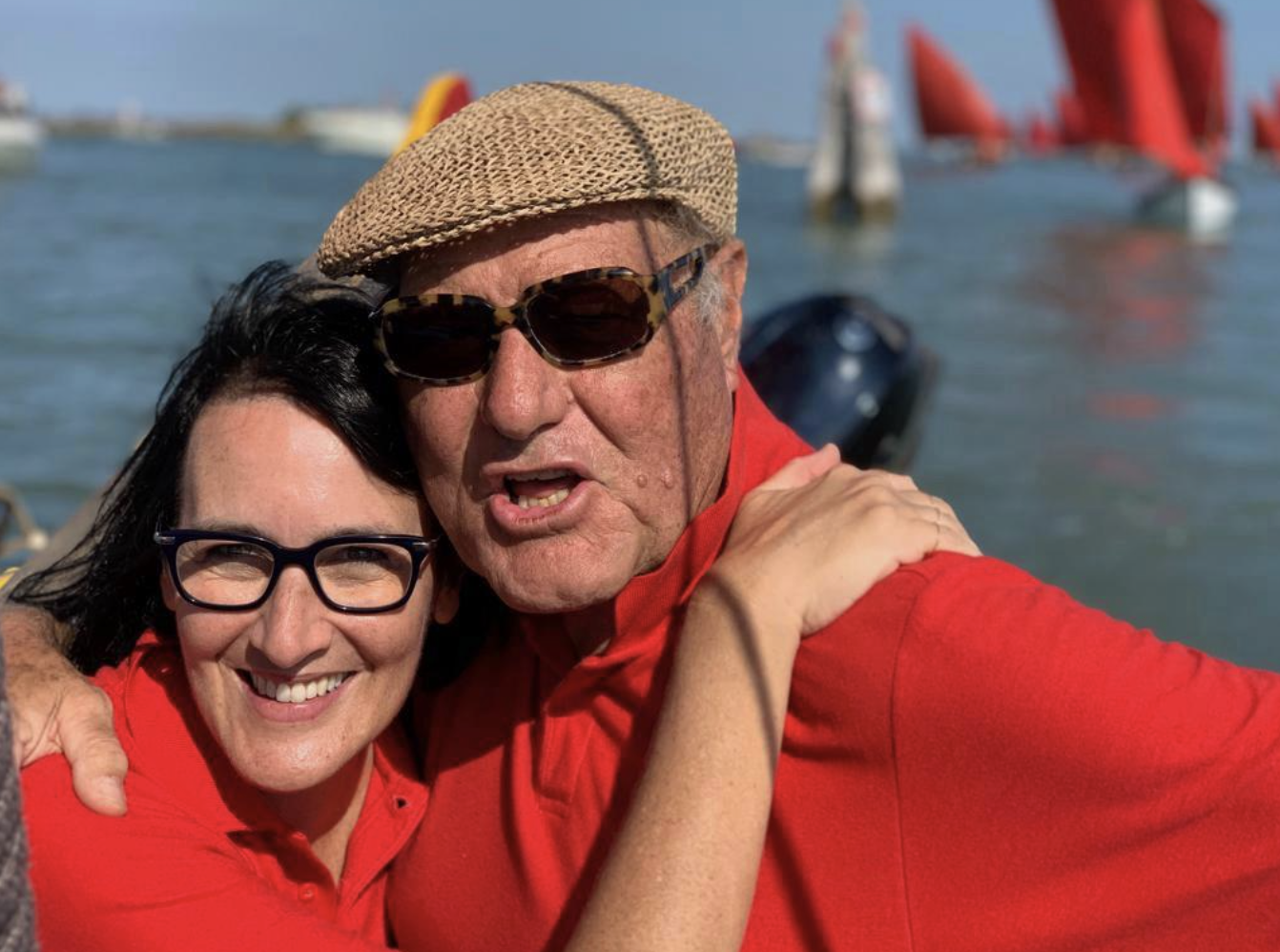