2021 saw you back again as a key player in Italy as curator of two significant projects. One at Palazzo Strozzi, «American Art 1961-2001» which brought together the work of 80 different artists, from Andy Warhol to Robert Mapplethorpe and another in Procida with Italics. How was this return to Italy?

The Palazzo Strozzi exhibition is a very important exhibition for me as it represented a bridge between my life in the USA and Italy. An exhibition from the Walker Art Center collection, the museum where I have been working for 5 years. We worked on it since Arturo Galansino visited me in Minneapolis over 4 years ago.

How did Panorama Procida, an open-air and widespread project on this wonderful Mediterranean island, involving 50 artists, come about? I would especially like to ask you how it was to reignite your relationships with galleries (which you know very well from your days as Director of miart) and the difficulty of having to reconcile collateral aspects with commercial needs?

To tell you the truth, I think there is a great misunderstanding about this commercial aspect – in fact, that there is nothing wrong with that, I would say that this is not a central matter. Of course, the galleries are “commercial enterprises”, but their attitude towards this exhibition has always been very project orientated and when you see the ambition of some works, both in size and importance, you understand during the 3-day event, there couldn’t have been a purely commercial goal.

I was at liberty with the choices I made, I based myself on the assumption that this is not solely a contemporary art exhibition, I had to work with what was historic and what already existed on the island, and with what would have been made ad hoc and site-specifically. So my research began with what was already available and everything that was contemporary built from there,    the contrary would not have been possible.
The relationship with galleries however was simple, I know them all apart from those who deal with ancient and modern art. I did my research, I talked to them and at the same time I looked for the ideal spaces where to place the works, and the spaces strongly conditioned and influenced our choices. Initially, we only had three indoor locations and everything else was outdoors.

When did you start working on the project?

I was invited at the end of April but I started working on it at the end of May because simultaneously I inaugurated the American Art 1961-2001 exhibition at Palazzo Strozzi, Florence and the collective exhibition “The Paradox of Stillness: Art, Objects and Performance” at Walker Art Center, Minneapolis. It was a race against time, we built the work team on the island so we could start looking for the right spaces in collaboration with Agostino Riitano, Director of Procida 2022. In the meantime, I made the selection of works by pairing them with the places that were found, but at that point, I realised that there were not enough, because obviously, the historian contemplates the interior. From there a series of reflections came to the forefront including my need for the spirit of the exhibition to be rather light, light in the way it integrated with the city, so I thought of inserting many performances and various interventions of various genres and a very natural dialogue opened up with the community. When I saw the Cappella di S. Maria Regina della Purità, for example, I had no doubt that it was the perfect place for “Concetto spaziale. La fine di Dio” (1963) in dialogue with works that spoke of transcendence. In other cases, I made modifications as I went along, as is normal.

Why did the project lasted only 3 days?

I think it was mostly down to costs and Covid. We didn’t even know if we could have opened with people present and above all, it isn’t easy to hold different events in conjunction on the island. For example, the Cappella di S. Maria Regina della Purità on September 10 is used for Maretica (a demonstration organised by the rowing association on the Island of Procida) and therefore the two projects could not coexist. There is an important underlying theme of logistics on the island.

At the end of all this work done in such a short space of time, do you find a common theme?

I worked deliberately so as not to have one unique theme, there couldn’t have been and I didn’t want there to be either. The project wasn’t supposed to be a Biennale.
The different themes I worked on include the relationship with the territory, in the case of what I did with the aforementioned Cappella di S. Maria Regina della Purità; On the theme of the “monument and anti-monument”, think of the works by Nicola Samorì, Paolo Icaro and Chen Zhen, or Giuseppe Pennone; All these works have an idea around either monumentality or anti-monumentality; The other theme is that of “performativeness”, the lightness of action that opposes the weight of the monument: that you can find it in all the performances that have come to life in the city over these few days but also in all the works that intersect and weave into the fabric of the city: the necklace in the jewellery shop (Alek O.), the glasses in the shop of an optician (Darius Mikšys), the fishmonger knife (Daniele Milvio), things I wanted to integrate into the way the island functions naturally so that the ashtray on a restaurant table becomes a work of art for 3 days (Francesco Pedraglio). A series of objects, a form of contamination that doesn’t even need to be noticed, a non-colonisation. The function of the objects remains the same, so not to undermine the natural functioning of things.
In each location, the works have a relationship to that particular place via a theme. For example, the work of Luigi Ontani is installed inside an entrance hall to a palace and is illuminated by glass lights by Heimo Zobernig because I wanted to create a dialogue between an Italian artist and a foreigner both working with traditional Italian materials, ceramics and glass. A merely material relationship. Depending on the place and works, I created dialogues that made sense to me.

You have created both a trans-temporal and trans-thematic relationship. For this reason Procida hints at a mini biennial.

In reality a biennial, like that of Istanbul, is not much larger than this project, surely it is more widespread, but the list of artists counts 50 participants. The biennial is entirely contemporary, but considering the level of numbers it maybe comparable and the complexity of this place makes it also very difficult. It has been years since I have been so stressed over such difficult matters, this experience was very complex from a logistical point of view.
Obviously it was wonderful to do it in summer, during one of the last weekends of the holiday season, on an island such as Procida, but certainly the general holiday closures in August put us to test. But that said only I know what doesn’t work and those things are probably not noticeable to an outsider, the result exceeded my expectations and I am very happy, certain things work out much more than they appear on paper.

How did the choice of Procida come about?

Because Procida is the Italian Capital of Culture 2022, in dialogue with ITALICS. I must say that ITALICS as a platform is working very well. At one point they thought it would be nice to create an event in the presence of people, a summer exhibition, looking at the future optimistically, together, for the first time after so long in isolation. At the same time, Procida was elected capital of culture 2022 and then Italics’s Board of Directors thought of Procida as the headquarters of the project, also because of the Procida 2022 motto, which is much more than a claim but a manifesto that explicitly says: “La cultura non isola” (Culture does not isolate) or the best way for us all to start again and do it together.

Is there anything in particular that provided you with the most satisfaction?

The exhibition in the Cappella di S. Maria Regina della Purità, definitely, it could be in any museum in the world and be an exhibition within an exhibition, there are three masterpieces (Lucio Fontana, Giulio Paolini and Matthias Stomer) and then the relationship I managed to create between a work of Giovanni Anselmo, Oltremare verso est Nord-est, 1979-2021 and a statue of the late 18th century, from the Giambologna original representing the Venus of Grotticella, in a gazebo, a sort of Ninfeo that opens in the lemon grove of a palazzo. A truly special place.
In general, it seems to me that the realisation between the works and places was truly precise and in many cases, for many visitors, surprising.
Then I must say that another great satisfaction was my relationship with the gallerists. There was a spirit of collegiality, despite the complexity of everything regarding timings and the different places. For me, many of them were like comrades. Surely my experience as miart Artistic Director has greatly helped me to manage the relationship with the gallerists, if it were not for this background it would have been much more complex.
I must say that they strongly believed in this project, they asked me to dive into this project without a parachute, all together and I couldn’t say no, because I also believe in this project and in the idea that you have to do things together. As it succeeded, I think it was one of the most rewarding experiences of my life. A sort of miracle and which is reaping beautiful fruit! 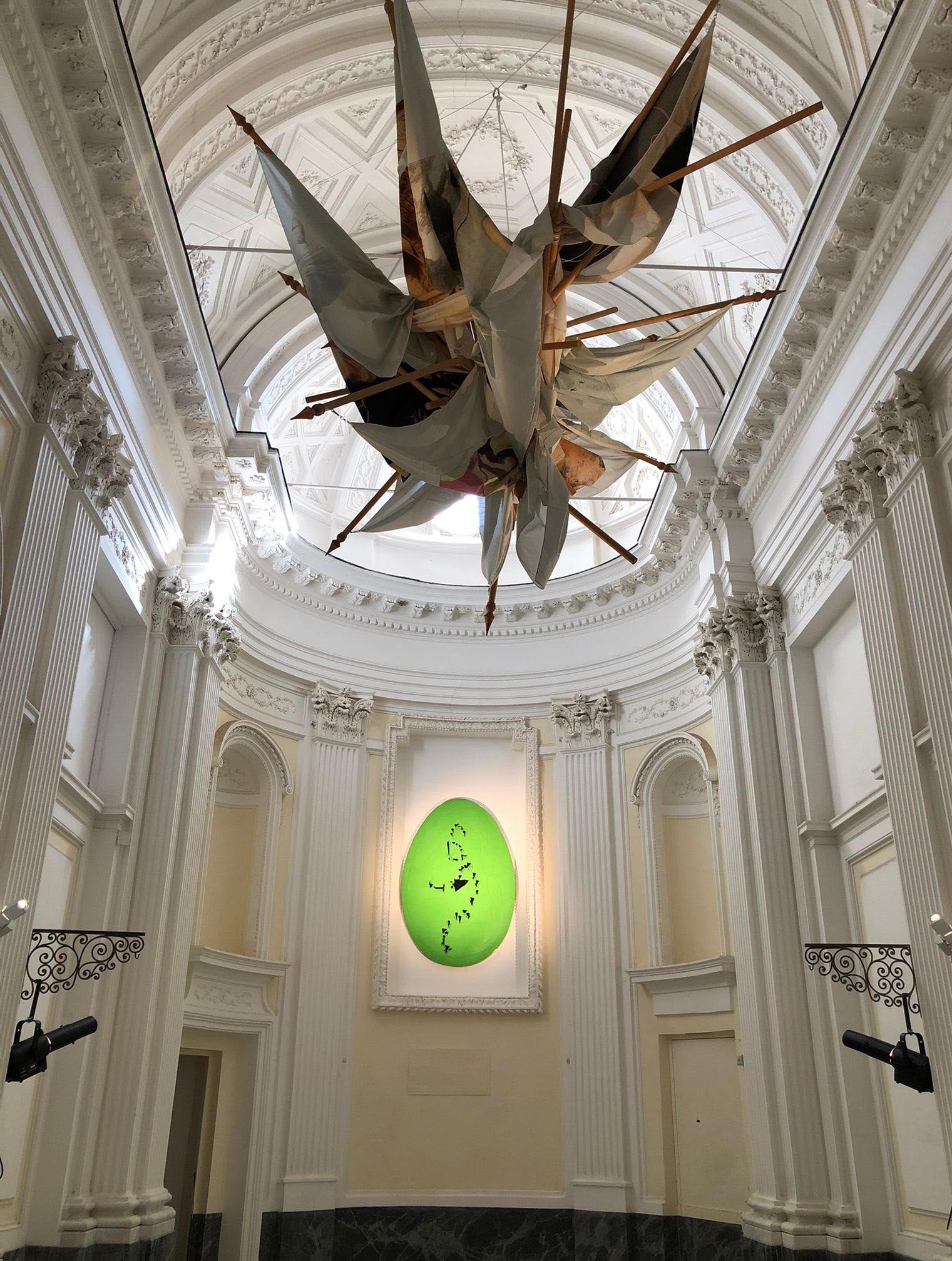 The spirit of collegiality might seem not very Italian because we always think that we are (and perhaps it is true) still a country of princes, dukes and counts always at war with others, but in reality, this is a stereotype, because when it is time to join forces we always do it better than the others (just look at Italian sport this summer!) And then it is very Italian that private individuals do something in public in the name of culture. The history of Italian art demonstrates, I certainly didn’t discover this myself. Indeed, I hope that this huge crisis provides the awareness so that the public starts to think about supporting hospitals, the environment and all the other challenges, and knows how to create real connections with the private to support culture and art, where there are those that exist (and they do) privates that want to sustain this. For all this and also for the strength that it has demonstrated in such a difficult year, I wish Italics and Panorama a long life.