Since 2012, Sabine Himmelsbach is director of HEK (House of Electronic Arts) in Basel. After studying art history in Munich she worked for galleries in Munich and Vienna from 1993–1996 and later became project manager for exhibitions and conferences for the Steirischer Herbst Festival in Graz, Austria. Her exhibitions at HEK in Basel include Ryoji Ikeda (2014), Poetics and Politics of Data (2015), Rafael Lozano- Hemmer: Preabsence (2016), unREAL (2017), Lynn Hershman Leeson: Anti-Bodies, Eco-Visionaries (2018), Entangled Realities. Living with Artificial Intelligence (2019), Making FASHION Sense (2020) and Real Feelings. Emotion and Technology (2020). In 2021 she curated the online exhibition and conference Hybrid by Nature. Human.Machine.Interaction for the Goethe Institutes in Southeast Asia. As a writer and lecturer she is dedicated to topics related to media art and digital culture.

The last 10 years in Basel have gone by in a flash – so much has happened in that time. For me, it has been incredibly exciting and stimulating to be able to help shape the institution HEK in its current form. During this time, a shift took place from a temporary venue to our current home, which has been remodeled for the context of a media art institution. HEK‘s aspiration is to reflect not only the visual arts, but also electronic music to dance and performance in our programme.

In terms of curating, I focus on alternating between international group exhibitions and solo exhibitions, whereby the focus here is often on showing an artistic position whose work has hardly been seen in Switzerland to date. In the group exhibitions, it is current, socially relevant topics that interest me – be it the use of new technologies in society such as virtual reality or artificial intelligence, to ecological change or the effects of technologies on us humans, our emotions, or our relationships. In addition, the focus is on promoting the Swiss media art scene. We do this on the one hand by awarding the Pax Art Awards, the Swiss prizes for media art, in collaboration with the Art Foundation Pax, and on the other hand through other exhibition opportunities or even commissioning works that originate in the context of our exhibitions.

The place where we are located – the Dreispitz – strongly shapes our work. The area is a former freeport and has only opened up to the public in the last decade. As a result, the neighbourhood was also rather unknown to the people of Basel for a long time. A lot has happened in the last few years – Freilager-Platz has become the new heart of the neighbourhood, where just 10 years ago trucks drove through the streets at 60 kilometres per hour. In the meantime, the School of Art and Design has become our neighbour with its talented young students. Here, of course, we are looking for opportunities to connect and cooperate. Otherwise, we also maintain close contacts with other museums and cultural institutions in Basel and have realised many cooperations in recent years – from the Museum Tinguely to the Kaserne or the Theater Basel. 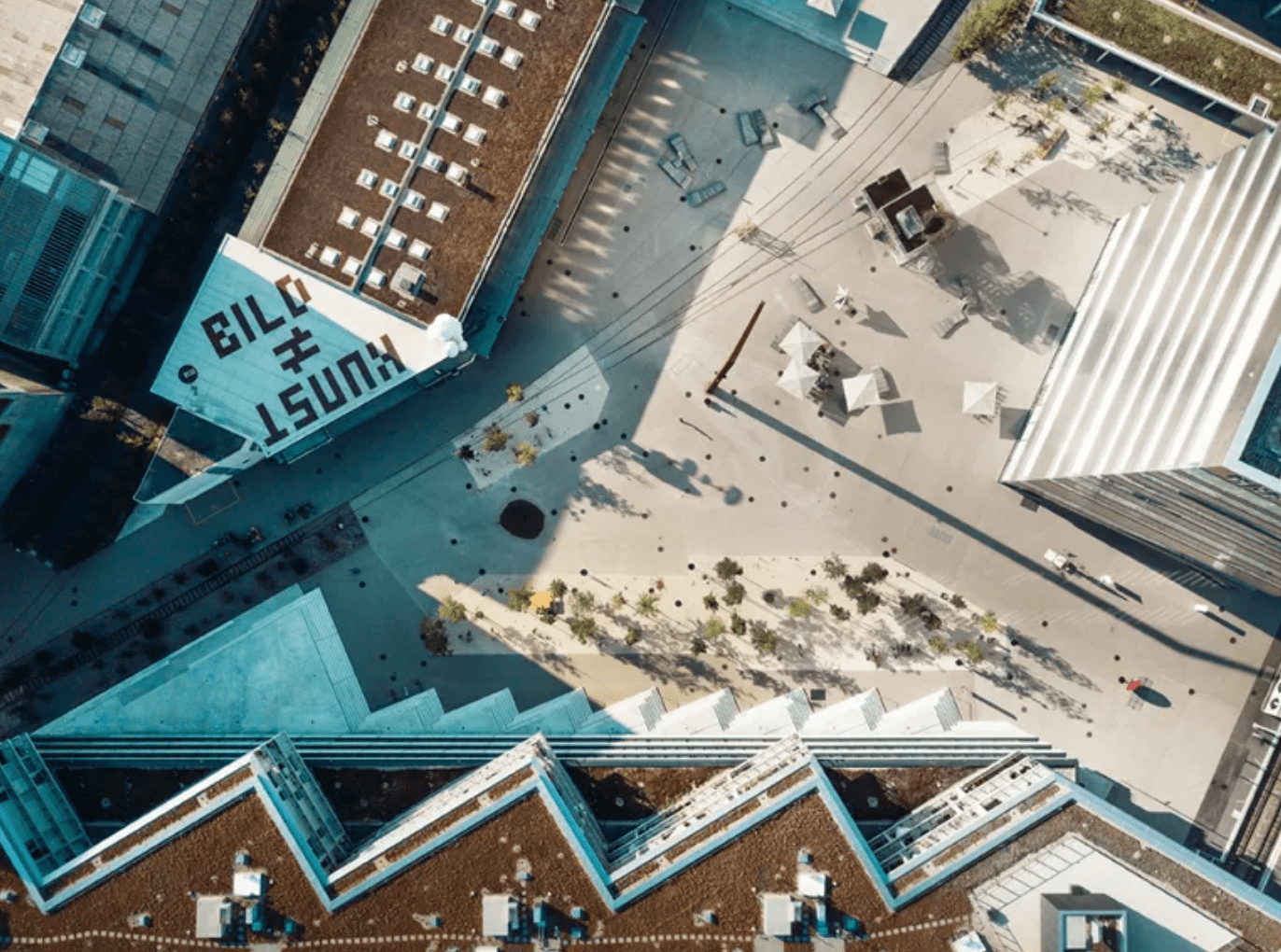 Basel is a city of culture; one could even say Basel breathes culture. The diversity of the scene is impressive, new exciting off spaces are popping up all the time. One reason for this is certainly the great commitment of the citizens to art and culture. A fantastic example is the commitment of the people of Basel in 1967 to keep a Picasso painting in the Kunstmuseum Basel. The whole city donated and got involved. The Kunstmuseum Basel is one of the oldest art museums in the world. With Art Basel, an art fair was then created early on that was able to attract an international audience.

But also in the field of digital art, Basel was one of the important hubs already in the 1990s and part of the global network “The Thing“, which was launched in New York. That’s why our predecessor institutions “Plug.in Forum for New Media” and “Shift Festival for Media Arts” originated in Basel.

Kunsthalle Basel also has a long tradition, having been founded in 1872. Today, of course, the Fondation Beyeler in Riehen and the Museum Tinguely are among the important players in the field of contemporary art. The Academy of Art and Design also makes an important contribution to the development of the art scene in Basel and the students are very active in founding new offspaces and exhibition venues, such as Giulietta, Palazzina or the experimental club WURM.

Always interesting of course is the exhibition program at Kunsthaus Baselland, who will show new works by Latifa Echakhch & Zineb Sedira for example.

And not to forget, of course, the commitment of the two cantons Basel Stadt and Basel Landschaft to promote local art creation. 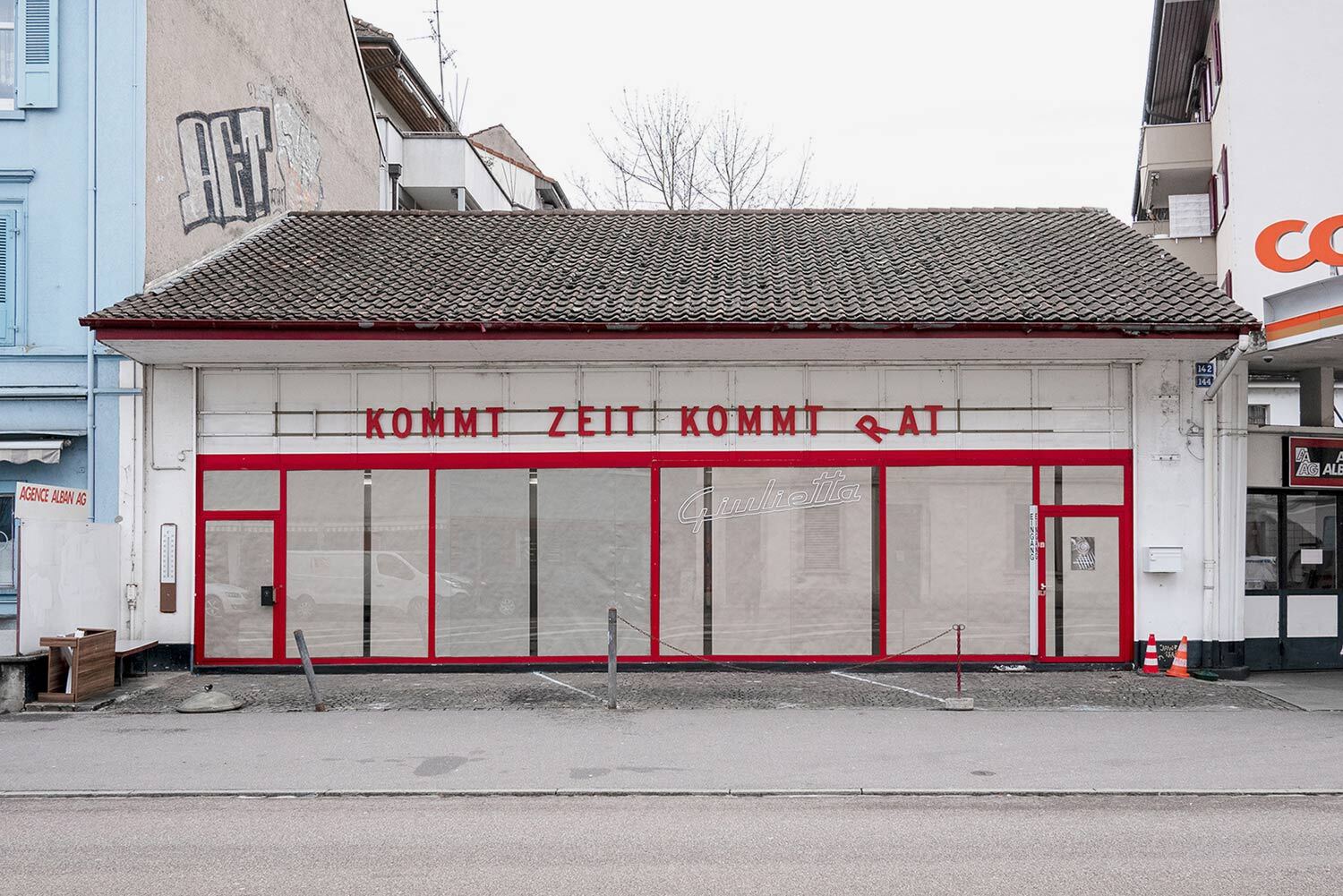 There is so much to see this year during Art Basel! I would not miss the show “Bang Bang” on performance art at the Museum Tinguely, that gives insight into performative art practice in Switzerland, but also with an international programme. A highlight will be “Picasso – El Greco” at the Kunstmuseum and the exhibition by Ruth Buchanan offers a new view on the collection of the Kunstmuseum Basel | Gegenwart. At the Kunsthalle Basel I am excited about the exhibition by Berenice Olmedo and at the Vitra Design Museum an exhibition on “Plastic: Remaking our World” awaits.

Not to be missed, of course, is the exhibition “Emmanuel Van der Auwera: Seeing is Revealing” at HEK, which allows visitors to immerse themselves in visual worlds in the truest sense of the word. Another brand-new experience is the “ARTour”, a free augmented reality app that lets you discover 10 artworks scattered throughout Basel that range from huge sculptures to encounters with digital jellyfish that react to the voices of the visitors. At night, I wouldn’t miss the 3 fascinating artworks on display on the media facade of the Novartis Pavillon, which opened just a few months ago.

From the offspaces I don’t know the programme yet, but I would certainly drop by at Ausstellungsraum Klingental, der Tank, Mayday, SALTS, Symbiont Space with their focus on art and science, and our neighbours Salon Mondial. 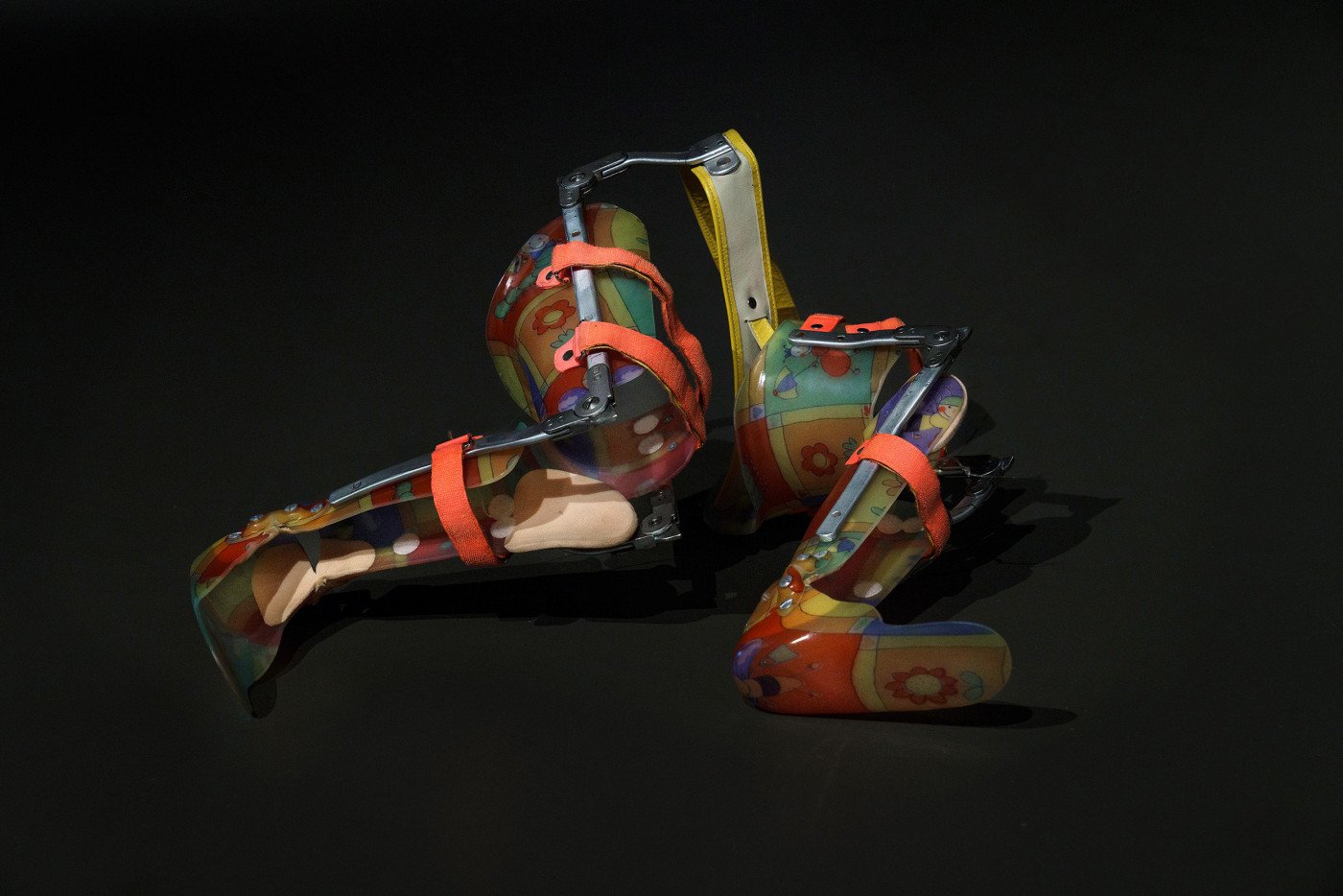 I start my day with a purchase at the bakery Krebs, which offers the best Gugelhupf in town and their unique Wiskeystängeli (wiskey and chocolate). Another tip is the bakery KULT, which now exists in two locations in Klein- and Grossbasel or Café Frühling. Now in summer, of course, the temporary bars along the Rhine are my favorite place to stop for a glass of wine in the evening. Restaurants I can recommend are the Rebhaus, Rhyschänzli, Zum Onkel, Kulturbeiz 113 in the Warteck building with a magnificent view over the Rhine, the Le Rhin Bleu, where you dine above the Rhine or a bit secluded in the harbour the Rostiger Anker. A special treat on Sunday are the fish rolls or brunch at the pop up Fisk&Øl at Uferstrasse close to the harbour. Nice for an aperitivo is Damati and other bars I can recommend are Conto, Grenzwert, Nebel or Herz with the best cocktails in town. Another place to chill out is Lido Basel in Lysbüchelstrasse in the Sankt Johann quarter – very urban. 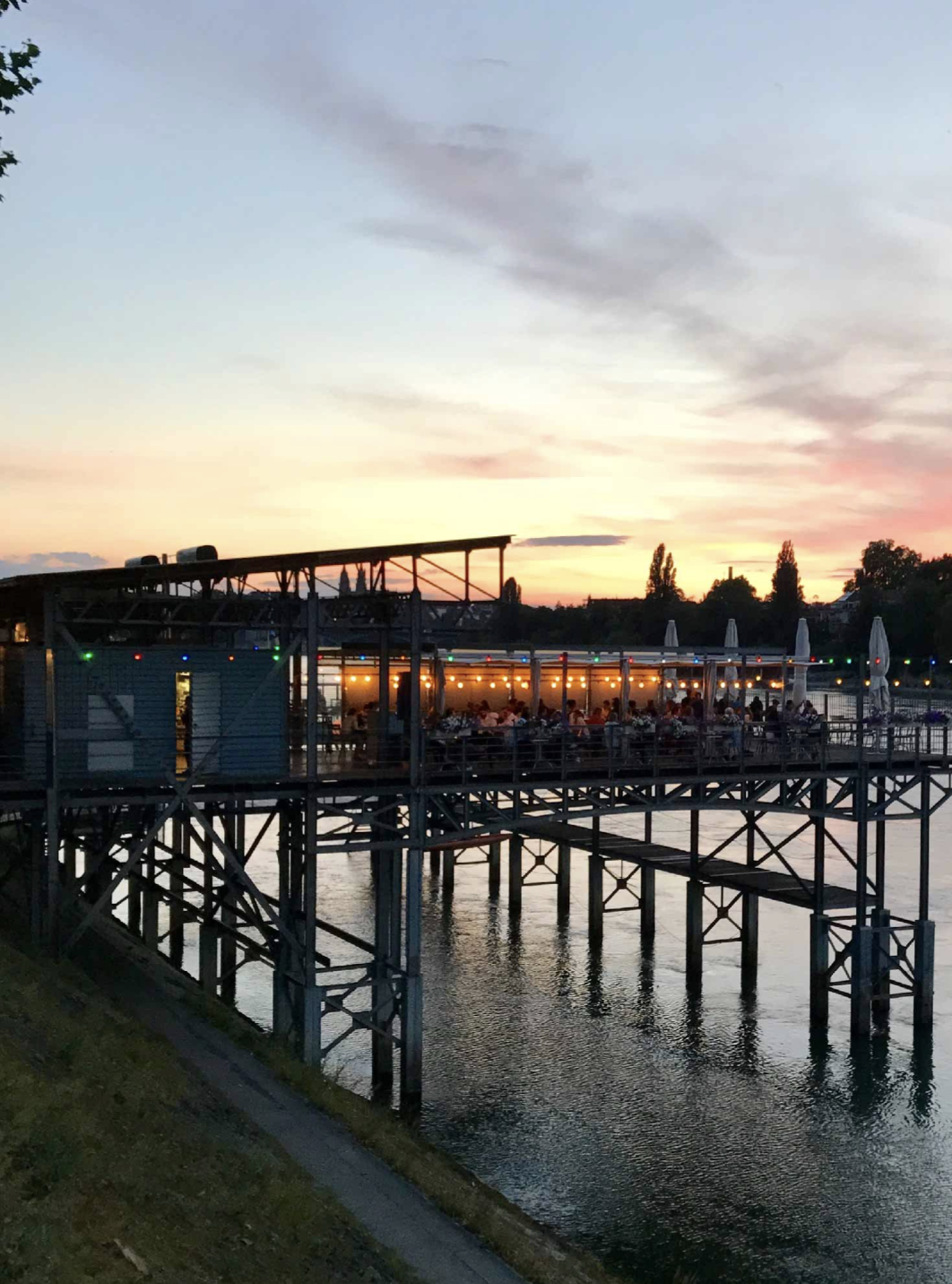