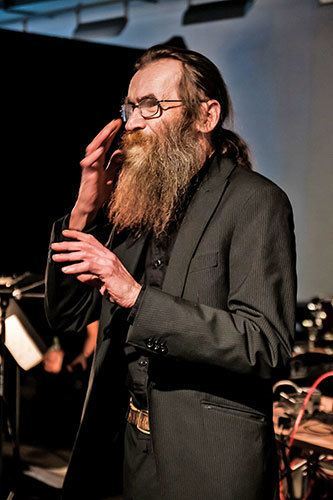 Milan Adamčiak after studying cello at the Music school in Žilina (1962-1968) continued in his studies of Musical Science at the Faculty of Philosophy at Comenius University in Bratislava (1968 – 1973). Between 1972-1991 he worked at the Institute of Musical Studies (later renamed to Institute of Art Studies) of Slovak Academy of Sciences on a research of music of the 20th century and the relations of music and visual arts. An intermediary author of action and conceptual projects with an accent on their musical and acoustic representation. Since the mid 1960’s, he has focused primarily on experimental poetry, graphic scores, and to the creation of sound objects, which resonate with the artistic strategies of John Cage and with the international movement Fluxus. He created a large body of work that transgressed the conventional definitions of art creativity and quickly moved towards the concepts of opera aperta, action music and various intermediary forms. In the second half of the 1960’s, he worked in several temporary as well as permanent teams of authors, particularly with Robert Cyprich and Jozef Revall. At the same time, he carried out the sound and musical section of several projects by other authors. (A. Mlynárčik, J. Želibská, J. Čihánková). By the end of the 1980’s, he renewed the activity of Transmusic comp. (1989), founded the Society of Unconventional Music (Spoločnosť pre nekonvenčnú hudbu – SNEH), and initiated the International Festival of Intermediary work (Bratislava, 1991).