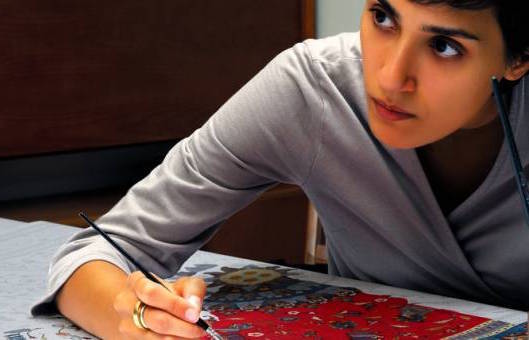 Nazgol Ansarinia examines the systems and networks that underwrite her daily life. Born and raised in Tehran, she dissects, interrogates and recasts everyday objects and events to draw out their relationships to the contemporary Iranian experience. She reveals the inner workings of a social system by taking apart its components before reassembling them to uncover collective assumptions and their underlying rules of engagement.
Her work is characterised by an emphasis on research and analysis that is a legacy of her design background, as well as by her continued engagement with critical theory. Her mode of working covers diverse media—video, 3D printed models, municipal murals and drawings—and subjects as varied as automated telephone systems, American security policy, the memories associated with a family house, and the patterns of Persian carpets.
Ansarinia’s practice is sited upon the fraught faultline between the private realm and its wider socioeconomic context. Even as its concerns have shifted from the intimacy of domesticity to an interest in the built environment, it has maintained an engagement with physicality and materiality. Still, the traces of lived experience—of owners, of residents—remain important. As a whole, the works explore how local iterations of a culture might act as a fulcrum and flashpoint for the hopes and fears of people living in an increasingly, albeit asymmetrically, globalised world.