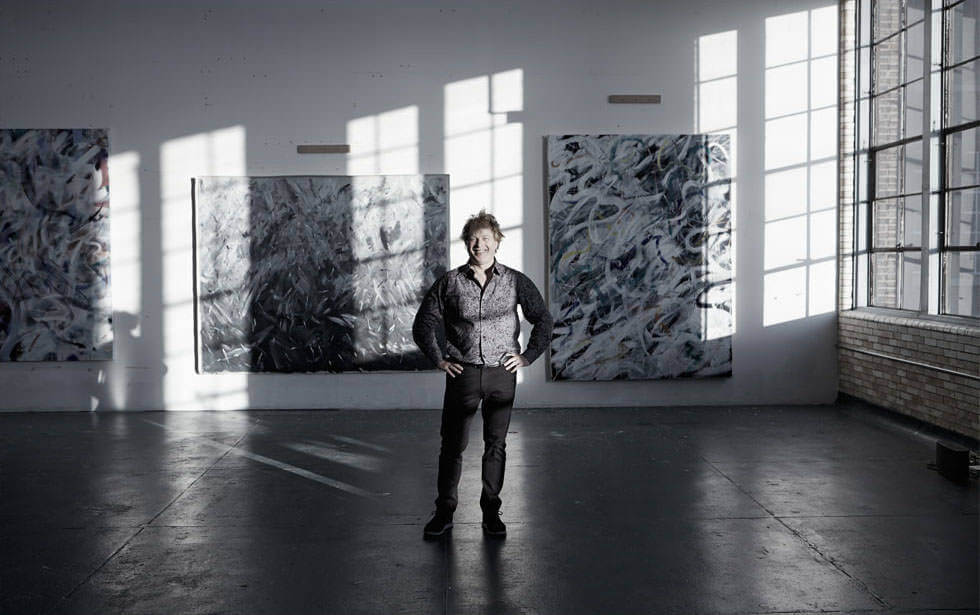 His compositional approach extends to both spatial construction and figural depiction in an oeuvre that lyrically conjures metaphors and art-historical references to the past and present.
In his most recent work, fluid orchestrations of biomorphic forms and geometric shapes, amidst spontaneous gestural swaths of color are swept over different pictorial depths and surfaces suggesting movement, instability, and the passage of time. Integral to Argue’s vocabulary of shapes, computer-generated stencils of scattered letters dissipate across these illusionistic fields to form their own lexical cosmos.
Culled from literary classics such as Moby-Dick to sonnets by thirteenth century poet Petrarch, Argue’s atomized texts are inspired by psycholinguistic and scientific phenomena. The artist explores abstraction syntactically: paragraphs, sentences, and words compose and decompose into one another, until they are only discrete letters; stretched and skewed, elastic and malleable as meaning itself.
“There are many different histories in the world, in both art and politics, and we often see things in the current moment, yet have no idea what lies beneath. One language is always turning into another, one generation is always rising and another falling, there is no still moment. I am trying to express this flux—this constant shifting of one thing over another, like a veil over the moment itself.”
Argue’s work has been the subject of numerous solo exhibitions including at the Richard Heller Gallery, Santa Monica, and in New York, Edelman Arts and Haunch of Venison. Most recently, two of his paintings were commissioned for the lobby of One World Trade Center in Manhattan. His work is held in the collections of the Minneapolis Institute of Arts, Walker Art Center, Weisman Art Museum, and numerous corporate and private collections. Argue has been the recipient of multiple awards including a Pollock-Krasner Foundation grant (1995) and the Rome Prize (1997).