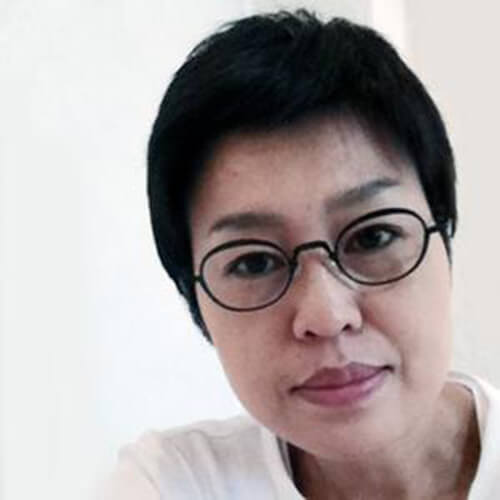 Dari Bae’s international perspective means her work combines and fuses varying concepts and values from a variety of cultures. Being a Korean who moved to England later in life, Bae describes feeling as an ‘outsider’ to both cultures, particularly following exposure to the admiration or romaniticisation of London in her homeland:
“Initially I was dazzled by London’s life, its apparent diversity and vitality, however, I soon became aware of a darker underbelly to this enchantment. I have become increasingly alert to the lack of cultural equality, the ensnaring nature of capitalism, the charged potency of particular substances, objects and ideas.”
Understanding these varying societal values prompted Bae to create works such as Chandelier: Hair Filament, alongside its various reworkings. Bae constructs a chandelier shape with glass bottles, which are then filled with electric lights, alongside clippings of human hair. The cutting of hair holds particular cultural resonance for Korea, where the Japanese occupation enforced the cutting of the Korean people’s hair in a rather metaphorical act that has been repeated various oppressive groups. As well as this historical reference point, the containment of the hair acts to symbolize containment or confinement in capitalism – “this ‘Chandelier’ is fuelled by the energy of individuals (hair) trapping them within the enchanting yet oppressive capitalistic system”, accentuated by the pyramid shape.
This variety of influence and fusion of ideas is also present in Bae’s choice of media. Chandeliers are, after all, a functional object, and hark back to their 15th century invention, and their continued use as trophy pieces or representations of opulence and wealth. Bae recontextualises these objects and allows them to become a vessel for her messages, whilst simultaneously reusing historic and cultural points of reference and materials in new combinations, a theme that continues throughout her work. Nylon tights and hangers, sugar and coffee, Bae takes these unassuming items and loads them with symbolism, transforming them into powerful cultural commentary.
Dari Bae holds a MA in Fine Art from the Wimbledon College of Art, London, and both a BA and MFA in Sculpture from Ewha Graduate School College of Arts and Design, Seoul, where she also continues to teach. Bae has been featured in numerous exhibitions internationally, including ‘The Seoul Art Exhibition 2010’ at the Seoul Museum of Art, the 2010 ‘Deutsch Postbank Exhibition’, ‘Power Paradox Party 2010’ at the Chelsea College of Art, the 2011 ‘Future Map 10’, Zabludowicz Collection, and ‘Artist at work; the process recorded’, at the Korean Cultural Centre, London, as well as Hanmi’s 7th interim exhibition, ‘FOUR_everyday life’. Bae has also been presented in many solo exhibitions across Korea over the last decade.