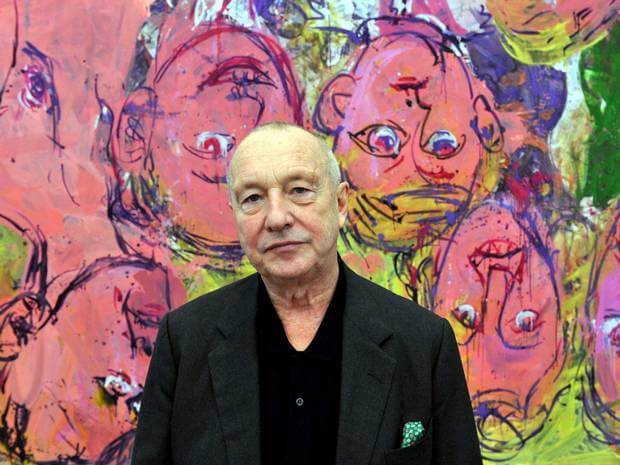 Painter, sculptor, printmaker and draughtsman, Georg Baselitz is one of Germany’s most celebrated living artists, with a distinguished career spanning over fifty years.
Born Hans-Georg Kern in 1938, he grew up in Saxony, an area that later became East Germany. Whilst studying painting at the Academy of Art in East Berlin (1956) he was sent down after one year for political immaturity‘. He then applied at the Academy in West Berlin and moved there in 1958, completing his studies in 1962. During this period he adopted the surname Baselitz, reflecting his place of birth Deutschbaselitz.
In searching for alternatives to the strongly narrative art of Social Realism and abstract painting, he became interested in art considered to be outside of the mainstream of Modernism. He began to look to Ferdinand v. Rayski, Michail Wrubel amomgst others and imagery that was rooted in the Art Brut. He was also inspired by Existentialist art and literature (Fautrier, Beckett, Ionesco, Artaud), by Dada (Schwitters, Picabia) and the works of the German authors Nietzsche and Gottfried Benn.