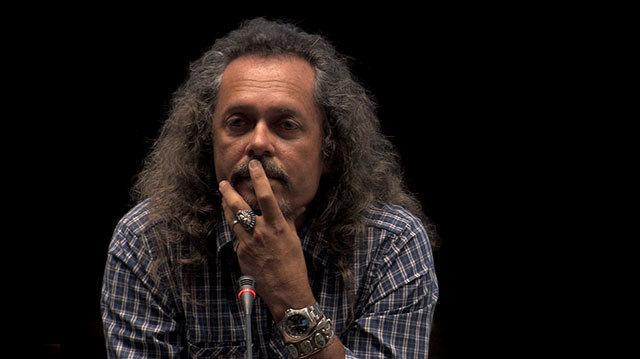 José Bedia (Cuban, b.1959) is an Abstract painter who illustrates ideas of spirituality and indigenous cultures. He studied at the Escuela de Artes Plasticas San Alejandro in 1976, and at the Instituto Superior de Arte in Havana, Cuba, in 1981. Four years later, in 1985, Bedia became the artist-in-residence at the State University of New York in Old Westbury. The artist also spent time with the Dakota Sioux on the Rosebud Reservation; studying the Sioux culture influenced his contour narrative style. Bedia’s first major exhibition was the group show Magiciens de la Terre at the Centre Georges Pompidou in Paris, France, in 1989. He was invited to participate in the Saõ Paulo Biennial in 1994.
Bedia also creates sculpture installations that reflect his interest in Indigenous Art. His recent retrospective, Transcultural Pilgrim, at the Fowler Museum at the University of California Los Angeles, included paintings, alcoves and altars that held peyote boxes, Yaqui masks, and Central African power figures. In the installation Figure Who Draws His Own Horizon Line, Bedia explores identity, and one’s own past and future while confronting obstacles. The artist also includes a confrontation between nature and machines, a common theme in many of his works. Bedia is considered part of the 80’s Generation group of migrant Cuban-American artists who used Afro-Cuban spiritual references in their art work. Ana Mendieta (American/Cuban, 1948-1985) was also a part of the 80s Generation. Bedia’s paintings and sculptures share themes that Mendieta also explores in woks such as her Silueta series.
Bedia’s works are in the collections of the Los Angeles County Museum of Art, the Museum of Contemporary Art in Los Angeles, the Museum of Modern Art in New York, the Whitney Museum of American Art in New York, The Guggenheim Museum in New York, and the Miami Art Museum. The artist currently lives and works in Miami, FL.

Exhibitions
Shades of Grey
This exhibition explores artworks that are made in black and white in diverse media and supports such...
12 Nov 2015 - 12 Dec 2015
Pan American Art Projects
Miami