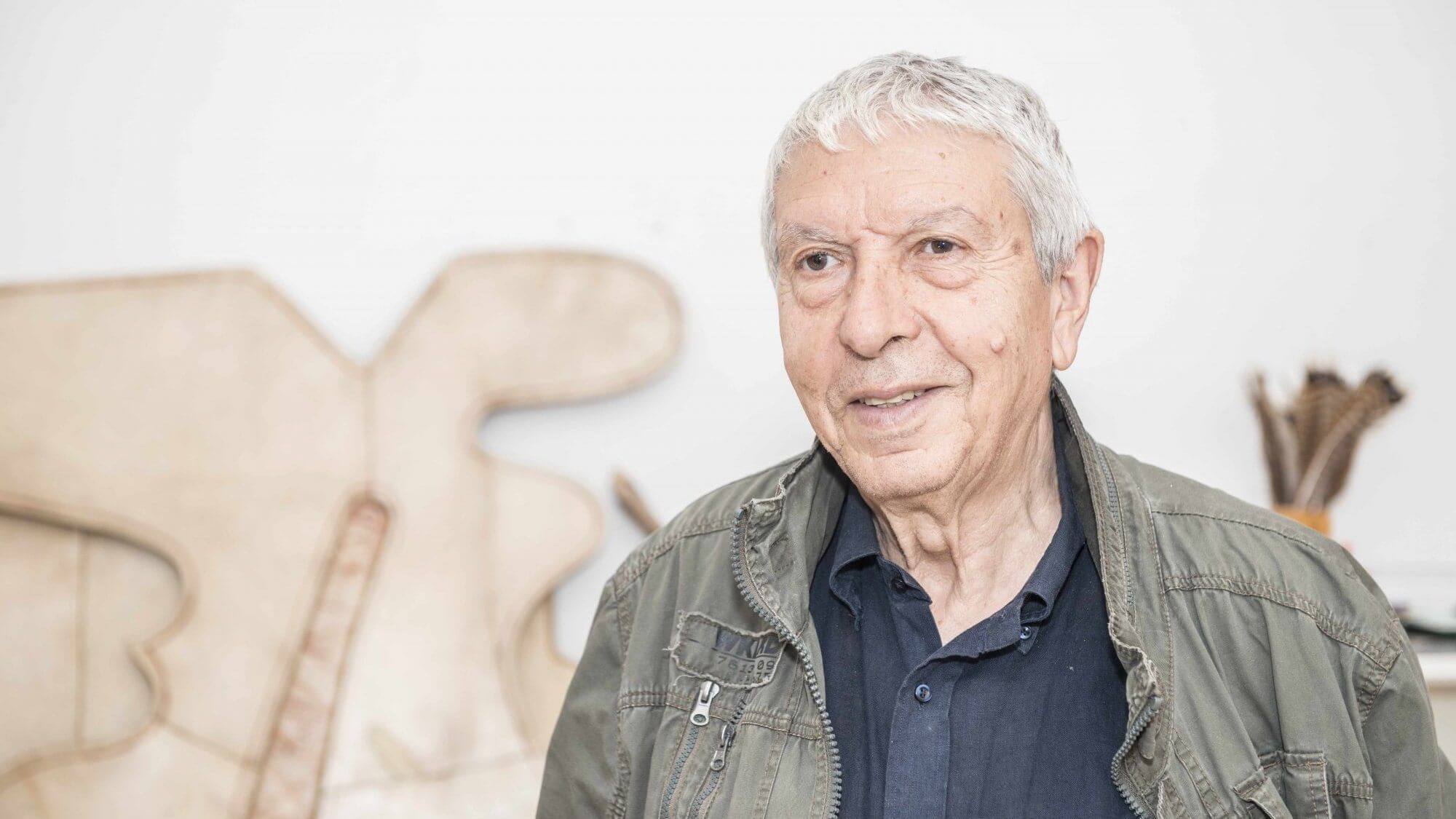 Farid Belkahia began his training at the Ecole Nationale des Beaux-Arts of Paris from 1954 to 1959. He continued his studies in Prague until returning to Morocco in 1962 to become director of the Ecole des Beaux-Arts in Casablanca, a position he retained until 1974. Belkahia turned away from oil painting and easels in the early 1960s and began working primarily with large-scale hammered copper. While retaining multiple dimensions, the copper was meant to be hung on walls and was used to create bas-reliefs. Since the mid-1970s, Belkahia is best known for the work he has done with leather, which he treats using traditional techniques and stretches over shaped supports. He then paints the leather with naturally occurring dyes such as henna.
The process of the work on both copper and leather is for Belkahia an important aspect of the creation of his art, and his work typically highlights not just the organic shapes that make up the content of the work, but the texture and dimensionality of the materials themselves. He has a consistent and carefully theorized taxonomy of symbols, shapes, and materials that resurface throughout his oeuvre. Belkahia’s work typically uses sinuous, organic shapes that recall bodies or corporality. Many of his works use triangles, arrows, and hands, and often involve questions of sexuality. He often employs Tifinagh letters from the Amazigh alphabet and symbols culled from traditional visual culture within Morocco, derived from rugs, tattoos, and architecture. Part of the interest of his work, however, is the way in which these symbols are re-constituted and re-imagined to become an integral part of his modernist visual vocabulary.
Belkahia was an active voice in the debates around post-colonial artistic modernism in Morocco, and contributed to   the leftist cultural and intellectual journal Souffles when it first came out. For Belkahia, using the cultural heritage of Morocco in his shapes, materials, and technique was a way of rooting international modernism within the local context. Under his leadership, the Casablanca Ecole des Beaux-Arts became known for advancing a pedagogy that turned away from the inherited French model of easel paintings and still lifes, instead highlighting Moroccan visual culture and architecture. The pedagogy of the art school was closely linked to the artists’ broader activities. With the artists Mohammed Melehi and Mohamed Chabaa (both of whom taught at the school), he formed the Casablanca group that first exhibited together in Rabat in 1966. In 1969, these artists along with three other professors from the school organized the “Exposition Manifeste” in Djemaa al-Fna in Marrakech, an open-air exhibition that sought direct contact with a larger public outside of official arts spaces. Later that same year, a similar exhibition was held in the Place du 16 Novembre in Casablanca.