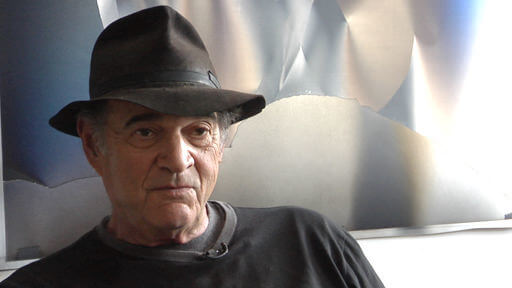 Throughout his career Larry Bell has made investigations into the properties of light on surface. By experimenting with the nature of surface and its relationship to space, Bell has devised a methodology characterised by spontaneity, intuition and improvisation.
Bell began his career in 1959 and his earliest works consisted of abstract, monochrome paintings on paper and shaped canvases whose outlines corresponded to the silhouette of a box drawn in isometric projection. Panes of glass and then mirrors were substituted for parts of the painted design and this exploration of spatial ambiguity eventually evolved into sculptural constructions made of wood and glass. These works represent the genesis of Bell’s later glass cubes and standing glass-panel wall sculptures.
From 1963 onward, Bell began exploring the passing of light through the cube sculptures, deploying a technique of vacuum deposition whereby thin films were added to the clear glass panels. Bell found that these glass cubes, presented on transparent pedestals, offered the viewer the essence of the captured light, becoming, in the process, tapestries of reflected, transmitted and absorbed light. Challenging notions of mass, volume and gravity in one single measure, the cubes appeared to float on the light between the floor and the work.
From 1968 to 1969 Bell commissioned the building of a coating device in order to produce work on a more environmental scale. During the plating process, thin metal films are deposited onto another material, mainly glass, resulting in a coating that allows light to be reflected, transmitted and absorbed simultaneously. He began creating sculptural installations with large sheets of glass that were rendered partly mirrored and partly transparent through the vacuum deposition procedure, thereby making the glass surfaces almost disappear and volumes become weightless. The colours which become visible are known as ‘interference colour’; an illusion which results when light hits the sculptures’ surface. Throughout this period, Bell produced interior wall environments, such as The Black Room for both the Museum of Modern Art, New York (1969) and the Tate Gallery (1970).
In 1978 Bell began experimenting with depositing the coatings on paper, finding in the process that the paper did not transmit light but only reflected or absorbed it. This body of work, known as ‘Vapor Drawings’, continues to this day. In the early 1980s Bell began combining different surface qualities as layers within the ‘Vapor Drawing’ oeuvre, such as Mylar and laminating film, to create the so-called ‘Mirage works’ – a mirage being an illusion which results from a combination of heat and light.
Bell’s more recent ‘Light knot’ sculptures developed from these ‘Mirage works’, eschewing their paper and laminate film and using only Mylar. These fluid works are composed of pliable, curvaceous-shaped sheets of polyester film that have been coated with metals and quartz. Highly reflective, the sheets are twisted into a knot and hung from a ceiling. Ceaselessly in motion, propelled by any slight air movement, these undulating sculptures act like a series of mirrors that reflect the viewer and their immediate spatial surroundings.