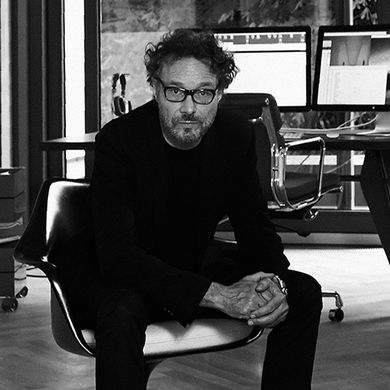 Marco Brambilla is no stranger to Hollywood, having directed the 1993 film Demolition Man, a sci-fi meditation on a dystopian future, perhaps one not unlike our own. Based in London, Brambilla’s work has been internationally exhibited and is in the collections of the Museum of Modern Art, Solomon R. Guggenheim Museum; San Francisco Museum of Modern Art; ARCO Foundation, Madrid; and the Corcoran Gallery of Art,Washington DC.

Brambilla has worked with Creative Time and Art Production Fund in New York to present public art installations, including his Nude Descending Staircase No.3 (2019) presented at Oculus WTC by Art Production Fund during Frieze New York. Brambilla is a recipient of the Tiffany Comfort Foundation and Tiffany Colbert Foundation awards. His work has been featured at the Venice Film Festival and Sundance Film Festivals, as well as Fondation Beyeler in Basel, Switzerland.

Exhibitions
Behind the Screen: An Art Tribute to Isabelle Huppert
The exhibition celebrates French actress Isabelle Huppert. Featuring a series of photographs and videos by...
28 Apr 2017 - 30 May 2017
Michael Fuchs Galerie
Berlin