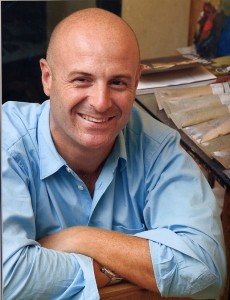 Born in Sardinia, he then moved to Palermo where he grew up and at university graduated in Political Science. Afterwards, he returned to Sardegna for an apprenticeship with the painter and architect Giovanni Antonio Sulas. He has since then lived and worked in Siracusa, Sicily since 1990, and in Paris since 2011 where he now lives and works. This is his first show in UK, and in 2015 he will have three shows in New York, one in Beijing, and he will be part of two large group exhibitions entitled “What we call Love” at the Irish Museum of Modern Art, Dublin and “Nel Mezzo del Mezzo” at Museo Riso, Palermo.
Ciacciofera for many years studied landscapes and how humans change them, and human portraits to find their typus. His works have existential themes, with central or appended political and social questions employing a complex, intensely symbolic, visual language.