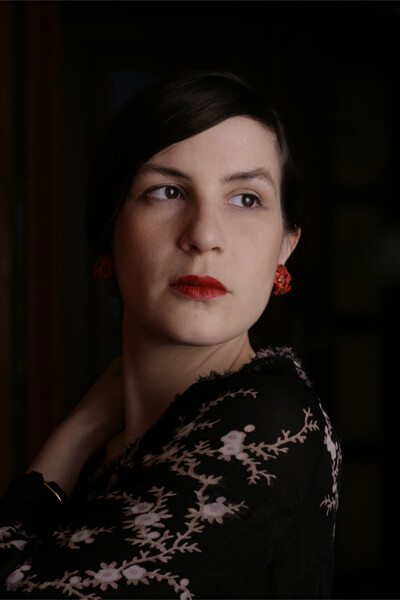 Pauline Curnier Jardin was born in 1980 in pertuis and she grew up in Marseilles. in 2006 she graduated both from the Ecole supérieure d’Arts de Paris Cergy, (Superior School of Arts) and from the Arts décoratifs, with a specialisation in Cinema and video. Along with those degrees, she got a scholarship from the “Pépinière des Jeunes Artistes Européens” to start a residency in Finland where she decided to settle from 2007 to 2008 and where she also finished her dissertation about the Joan of Arc representations in movies. That’s when she started with the creation of “movie-performances”, a show which mingles cinema and stage narrative, the first one was Ah Jeanne ! a variation about Jeanne D’Arc, and then she went on with LOV and TVO, a working-class and nuclear fairy tale, and the continued  her series of movie-papers with The White Ferrals. In 2009, she decided to settle in berlin, and in 2010 got a scholarship from the program Goldrauschkunstlerinen Projekt, as well as an MA of plastic arts from the University of Linköpping, Sweden in 2011.
Between both countries she created her “objects optic Opera” Le Salon d’Alone, which was first presented for the Dynasty exhibition at the Museum of Modern Art from the city of Paris in 2010, as well as the ethnographic peep show Ami (friend) presented both at the Palais de Tokyo in 2010 and for The Global Contemporay  at the ZKM of Karlsruhe in 2011. She has just finished a short-movie shot with 8 performers in different prehistoric caves about origins of humanity and called Grotta Profunda that she will present in several festivals next year (Hors-Piste at the Centre Georges Pompidou-Paris…)
The diversity of the media she uses in her work, her qualities as a visual artist as well as a videast and performer logically led her to multiply the exhibition projects in France (MAM of Paris, Palais de Tokyo, Printemps de  septembre..), abroad (ZKM of Karlsruhe, Watermill Center N-Y, Guangzhou University of China…) but also to bloom in numerous collaborations: Since 2007 she has been the Captain in Les Vraoums, a dada queer  recital, with dancers Virginie Thomas, Maeva Cunci et Aude Lachaise, and before that, had been a singer for Theodor Storm, Vercors et Dakota, and one of the she for the SHE-ROMPS with Catriona Shaw. She will thus participate as a plastician, performer and videast in two projects : Grand Magasin in France and Antonia Baehr in Germany.
She is co writing a movie about Ulrike Ottinger with the art Historian Marguerite Vappereau.

Exhibitions
The Institute of Things to Come 2020: The Convention of Restorative Anatomy and Prosopopeia
Exhibitions, public programs and an associates programme supporting new productions for emerging practitioners readdressing the notion of normality and alterity
05 Mar 2020 - 11 Dec 2020
Fondazione Sandretto Re Rebaudengo
Turin