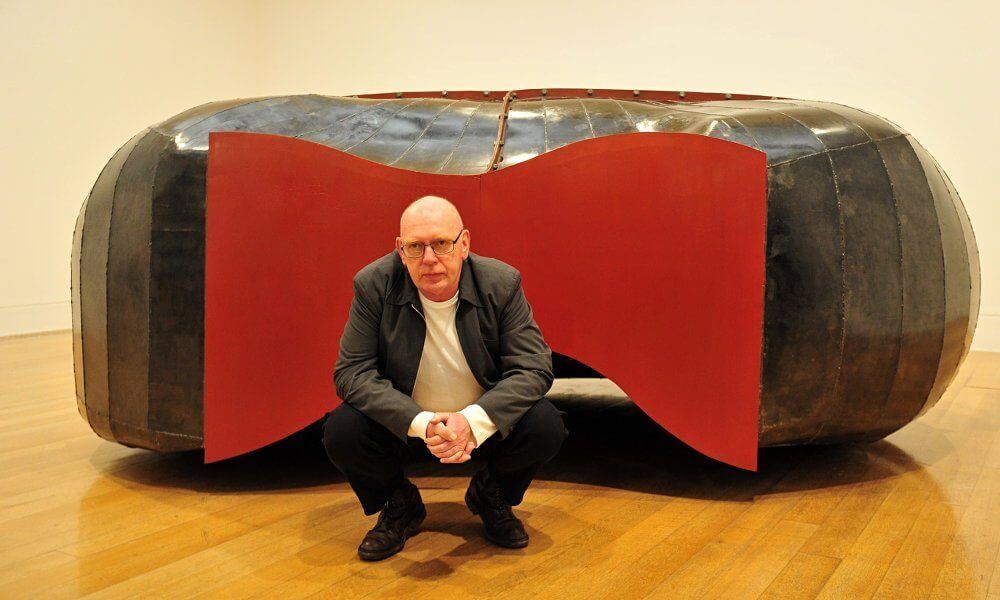 Richard Deacon is a sculptor born in Bangor in Wales in 1949. He has emerged as one of Britain’s most celebrated sculptors, best known for creating abstract works that combine biomorphic, open forms and virtuoso engineering. He works mainly in steel, wood, plastic, leather and cloth and has used bent steamed wood for his more recent works.
He was educated at Plymouth College and then studied at the Somerset College of Art in Taunton, St Martin’s School of Art in London, the Royal College of Art and Chelsea College of Art.
In 1980 he began making a series of sheet metal and laminated wood sculptures in simple organic shapes, their surfaces congruent with their structure. Deacon considered himself a fabricator rather than a constructor and used unformed basic material to make sculptures that explored, by the use of metaphor, ideas that defined human experience through language and the senses. Although the forms devised by Deacon were fundamentally abstract in appearance, this metaphorical reference to the body and its methods of gathering information was alluded to in idiomatic titles such as The Eye Has It (1984; London, ACGB; seeEngland, fig. 34). As Deacon widened both his vocabulary and his range of materials, incorporating, for instance, vinyl and plywood into Boys and Girls (1982; London, British Council), so he increased the depth and complexity of metaphor into a highly flexible personal idiom.
Richard Deacon won the Turner Prize in 1987 and the Robert Jakobsen Prize, Museum Wurth, Kunzelsau, Germany in 1995. In 1997 he was awarded Chevalier des Arts et des Lettres, France, and in 1998 was elected a Royal Academician. Deacon was made CBE in 1999. He lives and works in London. Recent solo exhibitions include a major retrospective at Tate Britain (2014), as well as exhibitions in New York, Copenhagen, and Singapore, among others.

Exhibitions
Out of the Matrix
The group show presents various British artists, each one focusing on different elements and media,...
13 May 2017 - 25 Jun 2017
Kunsthalle Palazzo
Basel