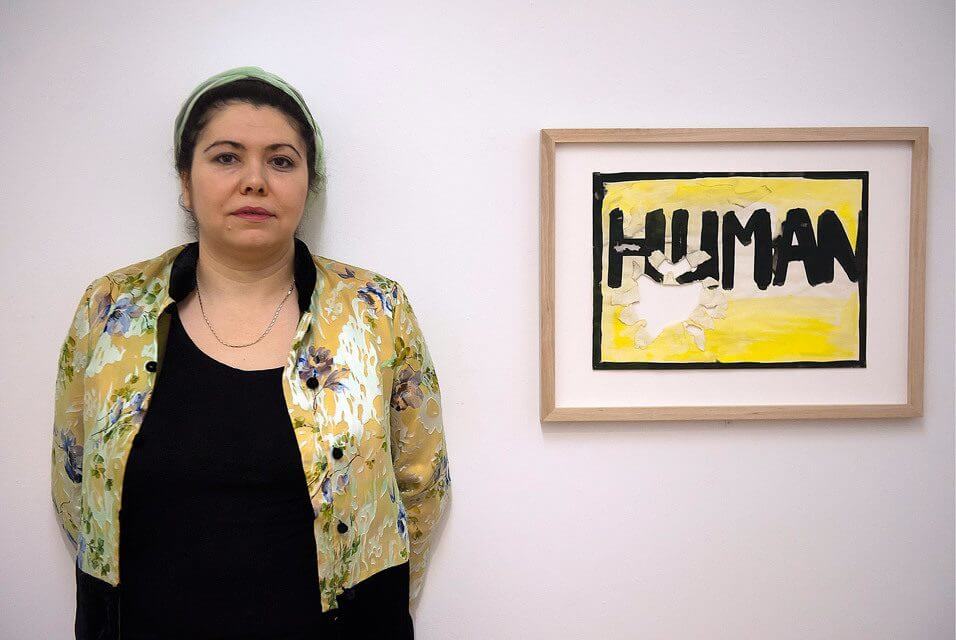 Born to a Hungarian-Syrian family in Budapest, Róza El-Hassan studied painting and sculpture at the Hungarian University of Fine Arts in the eighties. She participated in the reform movement of the institution that resulted in important changes, most notably in the founding of the Intermedia Department. In 1991, she joined the painter class of Martin Kippenberger in the Staedelschule, Frankfurt am Main.
Her early work, mostly object montages, “stretched objects”, and conceptual pieces, were informed by her theoretical studies at the Intermedia Department with professors like János Sugár, Dóra Maurer, Tamás St. Auby. She showed in “Aperto ’93” at the Venice Biennale – this launched her international carreer.
In 1998, she met Serbian artist Milica Tomic In Sao Paulo; the dialog and collaboration between the two artists, unfolding around the issues of the Yugoslav War, had a deep impact on El-Hassan’s work: she turned toward social issues, performance and figurative sculpture.
During the years between 1999 and 2010 she travelled frequently to the Balkans, and to Syria to discover the culture of her origins. Witnessing the human disasters in the region, she became one of the most radical political artists of Central Europe, searching for solutions while emphasizing the importance of aesthetical, social and psychological self-reflection and contemplation even in the most turbulent times of crisis. Since 2008, her practice has included social design (wick–art projects in Roma communities in Eastern Hungary), and since 2012, an extensive research on ecological and shelter architecture to support the Syrian victims with recycled Syrian building techniques for future’s sustainable architecture.

Exhibitions
InterWalls
The exhibition is the last show within the gallery space in the Vogesenstrasse 29, as the gallery moves...
15 May 2017 - 26 Jun 2017
Tony Wuethrich Galerie
Basel
Art Spaces