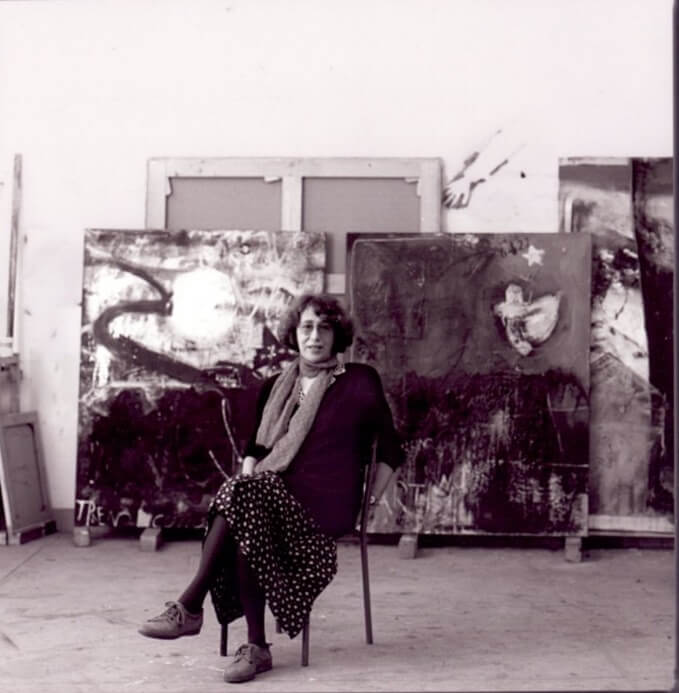 Born from a family of artists (her father Mario was a sculptor, her mother a painter), she studied at the Academy of Fine Arts in Rome, where she was a pupil of Toti Scialoja. She spent a period in Paris (between 1958 and 1962),  she exhibited at the VII Quadrennial of Rome in 1955 and the following year at the XXVIII Biennale di Venezia. She took part in the artistic environment linked to the La Tartaruga Gallery by Plinio De Martiis in Rome. She met Cy Twombly, De Kooning, Rauschenberg. In a personal exhibition in 1961 at Tartaruga with Umberto Bignardi she began to exhibit canvases made with industrial colors, aluminum and gold, bearing signs, writings, symbols, superimposed and deleted. She took part in the Verri group and Group 63 and was part of the School of Piazza del Popolo with Tano Festa, Mario Schifano and Franco Angeli with whom she exhibited at the Venice Biennale in 1964 (the Biennale of Pop Art) invited by Maurizio Calvesi. From that year she became the stable companion of Goffredo Parise; she will remain at his side until 1986, the year of the Venetian writer’s death.
From 1963 he works with photographs projected on the canvas, in 1967 at the Galleria del Naviglio in Milan he exhibited a series of works with faces and female figures on a white background. Revisits works of the past, Botticelli, Carpaccio, Simone Martini. In 1968 he inaugurated the exhibition The Theater of the Turtle exhibitions with an action entitled The optical spy then re-presented at the Rome Quadriennale in 1973. From 1969 he approaches the world of fable and legend: paintings, boxes and theaters open to the world of memory personal and collective. Collaborations with writers and poets belong to the eighties. In 1990 the National Institute for Graphic Design in Rome set up an anthology with his works on paper. At the 1993 Venice Biennale, he is present with a personal room and in the same year he starts working with ceramics.