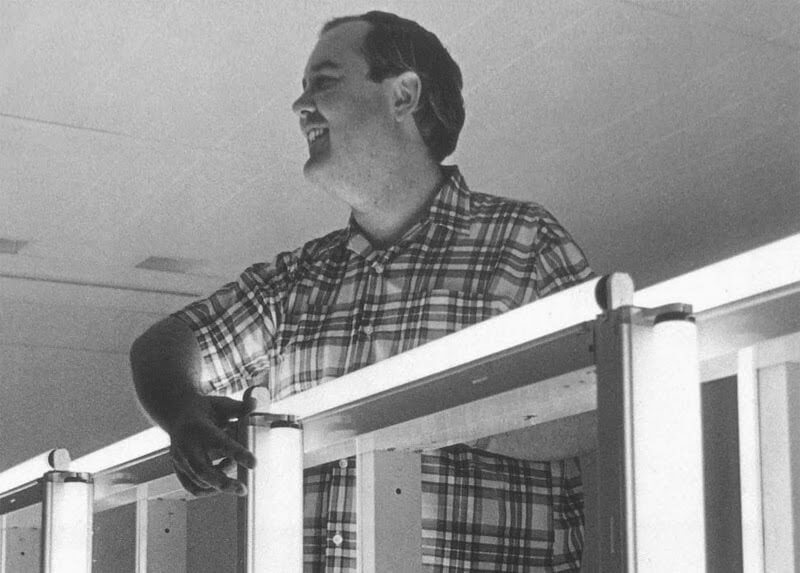 Daniel Flavin was born in Jamaica, New York, in 1933. He studied for the priesthood for a brief period of time before enlisting in the United States Air Force. During military service in 1954–55, Flavin studied art through the University of Maryland Extension Program in Korea. Upon his return to New York in 1956, he briefly attended the Hans Hofmann School of Fine Arts and studied art history at the New School for Social Research. In 1959, he took drawing and painting classes at Columbia University; that year, he began to make assemblages and collages in addition to paintings that pointed to his early interest in Abstract Expressionism. In 1961, he presented his first solo show of collages and watercolors at the Judson Gallery in New York. In the summer of 1961, while working as a guard at the American Museum of Natural History in New York, Flavin started to make sketches for sculptures that incorporated electric lights. Later that year, he translated his sketches into assemblages he called “icons,” which juxtaposed lights onto monochromatic canvases. By 1963, he removed the canvas altogether and began to work with his signature fluorescent tubes; and by 1968, he had developed his sculptures into room-size environments of light. That year, Flavin filled an entire gallery with ultraviolet light at Documenta 4 in Kassel (1968).