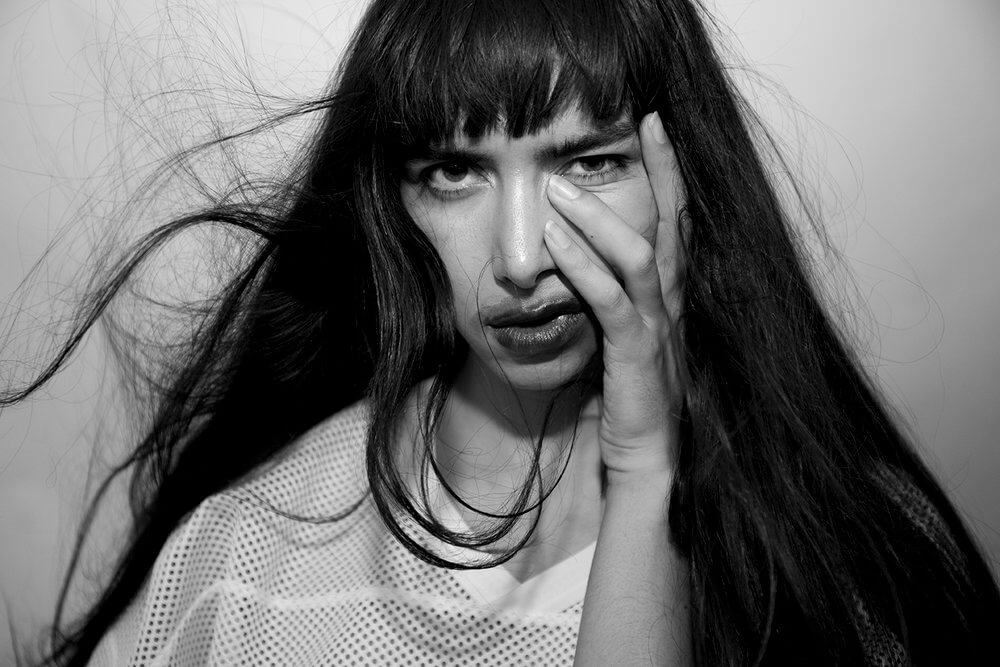 Martine Gutierrez received her BFA from the Rhode Island School of Design in 2012. The Brooklyn-based performance artist draws from eclectic media, acting as subject, artist, and muse, documenting her personal metamorphosis into various imagined roles.
Through the transformation of physical space and composed self, Gutierrez investigates identity—both personal and collective. Interested in the fluidity of relationships and the role of genders within them, she employs mannequins as her counterparts to explore the diverse narratives of intimacy. Life size backdrops and props interchange with physical locations in a dialogue about reality. Integral to her work is the active participation of the viewer.
“Society perpetuates rigid constructs—fabricated dichotomies like ‘male’ vs. ‘female’, ‘gay’ vs. ‘straight’, ‘minority’ vs. ‘white’, ‘reality’ vs. ‘fantasy’, ‘dominate’ vs. ‘submissive’, etc.,” Gutierrez says. “But our interpretation of these constructs is subjective and not immutable. Reality, like gender, is ambiguous because it exists fluidly.”
Acting as a conduit, she supplies a framework—through a gesture, a room, an exchange between characters—that encourages a discourse between the viewer and the work, one that requires the viewer to question his/her/their own perceptions of sex, gender, and social groups.
“I think of each work as a documentation of a transformative performance. I am interested in every facet of what it means to be ‘genuine’, especially when performing in a role society would never cast me in. I stage the scene and emote, but the viewer sees what they want to see; they can actively engage with the work or passively make assumptions. While gender is inherently a theme in my work, I don’t see it as a boundary. The only profound boundaries are those we impose upon ourselves.”
Gutierrez is represented by RYAN LEE, New York, NY. Current and recent exhibitions of her work include Disturbing Innocence, curated by Eric Fischl at the FLAG Art Foundation, About Face: Self-Portraiture in Contemporary Art, at the Hood Museum of Art at Dartmouth College, where her work is also included in the permanent collection, and hummannequin, a solo exhibition at Anna Marra Contemporanea gallery in Rome.
In 2016, Gutierrez presented in two solo exhibitions: True Story at Boston University, and WE&THEM&ME at CAM Raleigh (the Contemporary Art Museum, Raleigh, NC). While in residence at the International Studio & Curatorial Program (ISCP) in Brooklyn, NY, her work was also featured on a public billboard installation throughout the greater NYC area. The project–MartineJeans—was made in collaboration with the New York Community Trust Van Lier Fund, and the New York City Department of Cultural Affairs in partnership with New York State Council on the Arts.
A published musician and producer, Gutierrez’s first unreleased single, Hands Up was selected by Saint Laurent Paris for their Cruise Collection 2012 video editorial. Her music has since been featured by several other fashion houses, including Christian Dior and Acne Studios.