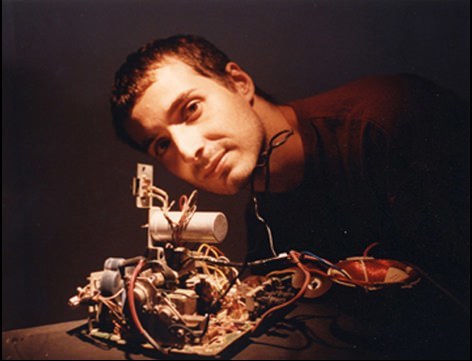 Employing a variety of new media and an urban youth aesthetic, Venezuelan-born artist José Antonio Hernández-Diez creates work that resonates with mischief, parody, and social relevance. Characteristic of the contemporary generation of Venezuelan artists, Hernández-Diez utilizes an international language while engaging regional subject matter. For a group of works entitled Perfect Vehicles (1993), the artist painted portraits of adolescents on the back of skateboards whose faces were covered with bandanas. These local “hoods” – protestors who often confront the police at Caracas’s Central University – signify the rupture in the Venezuelan social fabric between freedom of expression and authoritarian tendencies. In other works in this exhibition, such as Indy (1995) and Twelve Wheels (1996), Hernández-Diez playfully mines the skateboard for humor and meaning.
José Antonio Hernández-Diez has held individual exhibitions in New York, Madrid, Sao Paulo and Caracas, and collective shows at the San Francisco Museum of Modern Art, the Nacional Centro de Arte Reina Sofía museum (Madrid), La Caixa (Barcelona) and the Alejandro Otero Museum (Caracas), among others. He has also participated, in some of them, in the 1996 Sao Paulo biennial, the 1995 Kwangiu International Biennale, Korea, and in the opening of the Venice Biennial, 1993. At the New Museum of Contemporary Art in New York, under the curatorship of Dan Cameron (chief curator) and Gerardo Mosquera (assistant curator). Hernández-Diez has been presented by the New Museum as “one of the most important artists to have emerged in the last decade”, whose work, based on the utilization of unusual materials taken from urban and daily existence, “elevates the street and domestic culture, while commenting on political and economic reality in South American life”.
The exhibition, conceived as a mid-career survey, bring together pieces which synthesize some of the themes developed by Hernández-Diez over the past ten years: the relationship between technology and the body, marginality and vernacular culture, between the banality, the idleness and objectual representation within the customs of mass culture, an event presenting works which refer to the personal universe of the creator. Among some of the pieces exhibited and compiled in the catalogue, is the San Guinefort (1991) installation, a glass showcase which encloses the mummified body of a street dog, which the spectator is able to touch, using some plastic gloves; La Hermandad (1994), which includes scooters made from chicharrón (fried pork skin), accompanied by three videos recording the stages of these objects: birth (frying in the frying pan), life (wandering through the streets), and death (devoured by street dogs), two-yard acrylic fingernails placed on a wide strip of sandpaper belonging to the S & M series(1998); sculptures which take the place of replicas, on a larger-than-life scale, of deformed spoons and the lids of remote control batteries; a furniture series including the work Ceibó (1999), a cupboard on which a video is projected where the artist, in a continuous manner, extracts and introduces objects; together with a series of photographs of enormous rubber shoes, taken between the years 2000 and 2002, among other pieces.