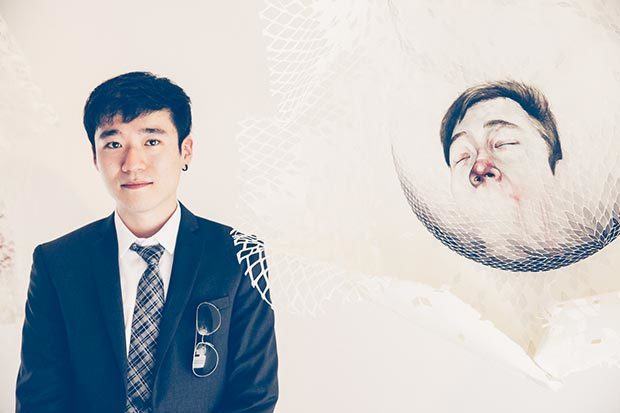 Timothy Hyunsoo Lee (born 1990, South Korea), is an emerging Korean-American artist working in Brooklyn, New  York, USA. His love for drawing began as a child, but his decision to pursue art professionally happened during his last year as a Biology, Drawing, and Neuroscience major at Wesleyan University (Middletown, CT). Drawn to the studio, and the creative process of making art, Timothy withdrew his ambitions of attending medical school and rented a studio in Williamsburg upon graduation, where he currently works.
Hyunsoo Lee’s works are inspired by themes of social stigma, identity, psychological disorders, and more recently, of spirituality and religion. He explores these themes through a novel vector – paintings and sculptures consisting largely of cell-like marks that vary in size, color, and saturation. His works are seen as ethereal and delicate, but the extremely labor-intensive compositions, marked by intensely obsessive repetitions, quickly betray that initial perception. Exploring his own history of anxiety disorders through his art, Timothy confronts and manipulates his tics and compulsions and channels them into his works. In responding to his anxiety with art, he has developed a novel system of mind-mapping – “a cartography of his psychopathology” – to study a part of himself that initially drew him to study developmental biology and neuroscience in college.