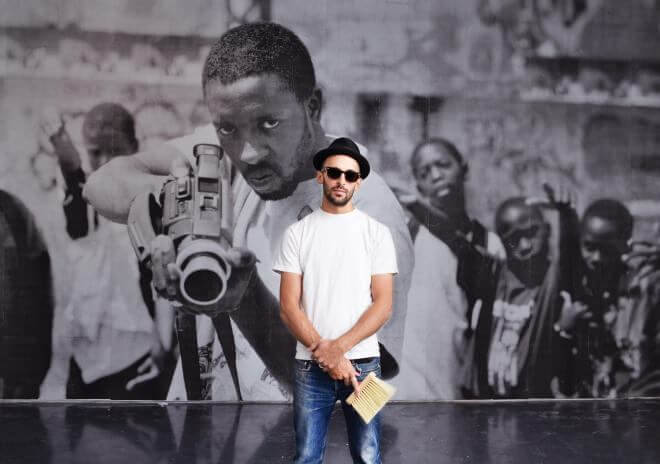 Born to a Tunisian mother and European father in the banlieues of Paris, JR started out as a graffiti tagger using the monicker Face 3 before transitioning into photography, taking pictures of other street artists at work. (He still calls himself a “photograffeur.”) In 2004, however, after riots broke out in the banlieues, JR created his first major project, photographing the faces of the rioters and pasting up large prints of their faces around the city. This approach, which humanized a largely immigrant populace that the government officially termed “scum,” has become JR’s trademark. In 2007, he pasted portraits of Arabs and Jews on walls throughout Israel and the West Bank for the project Face2Face, and in 2008, after the government-involved murder of three young men in Rio de Janeiro’s disenfranchised Morro da Providência favela led to riots, he plastered enormous pictures of the eyes of the community’s women (including relatives of the dead youths) on buildings looking down into the city for Women Are Heroes.
After winning the 2011 TED prize, JR inverted his practice for the project Inside Out, inviting people around the globe to send him photographs of themselves that he would then print out at large scale and send back to them to mount publicly. Participants have ranged from North Dakota’s Lakota tribe to the revolutionary Tunisian protesters. Represented in Paris by Emmanuel Perrotin, JR was invited to create a giant photo booth at the Centre Pompidou, and in 2010 his film of theWoman Are Heroes project was premiered at the Cannes Film Festival. “The fact that art cannot change things makes it a neutral place for exchanges and discussions, and then enables it to change the world,” the artist has said. “What is most fascinating to me is involvement.”

Exhibitions
JR: Ghosts of Ellis Island. An Unframed project, short preview
About 10% of the millions of migrants who passed through Ellis Island, deemed unhealthy to enter into...
12 Mar 2015 - 30 Apr 2015
Hong Kong

Exhibitions
Handle with Care
Following an investigation of the socio-cultural and environmental situation in Venice, an example...
20 Apr 2019 - 15 Jun 2019
Various Venues In Venice
Venice
Art Spaces