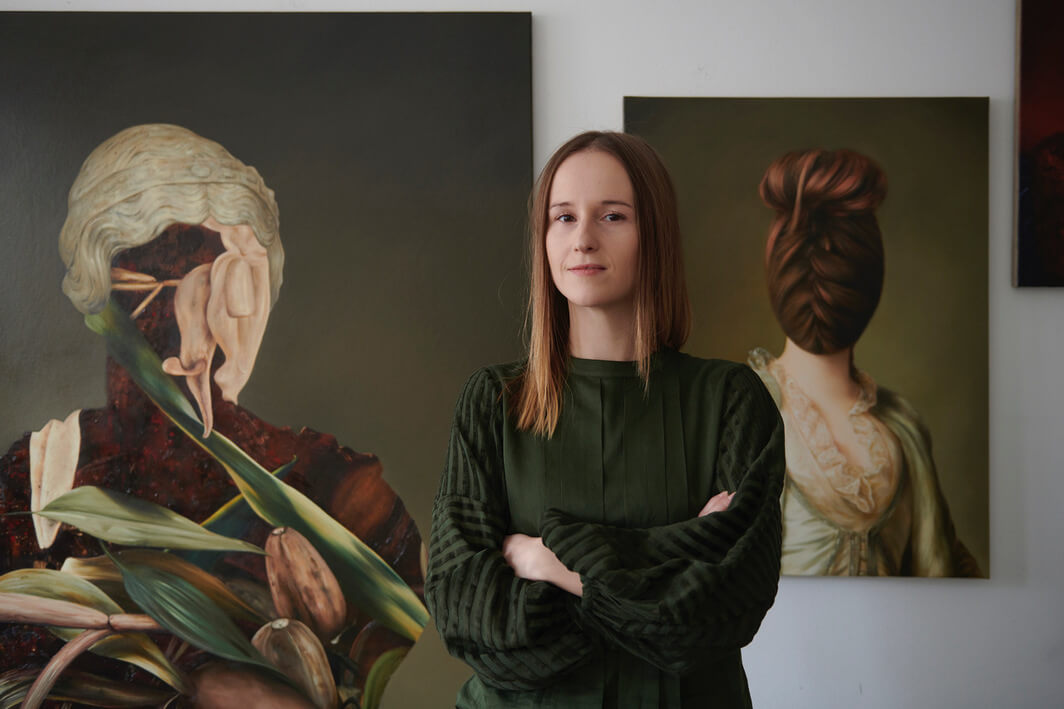 Ewa Juszkiewicz’s dialectic between creation and destruction has been
present in her creative activity since 2012 when she started her cycle
based on old masterpieces created between the Renaissance and the
19th century. The artist characteristically draws her inspiration from
portraiture, especially the female portrait. She processes, i.e. destroys
and recreates, familiar female portraits by depriving them of their ob
viousness and familiar order, and thus creates her own galleries of new
images. Juszkiewicz builds a new narrative by transforming, fragmenting,
or changing the context of her selection of works. She creates a unique
herstory by transforming the portraits of the wives, mothers and daugh
ters of influential men, and depriving them of their faces, and by doing
so addresses the following questions: What remained of them in history
except for their images? Has anyone ever spent a minute to look at the
subject’s personalities, achievements, aspirations? Various reference books
and archives offer information about nearly every man featured in old
portraits, but the only thing which remains of the women is their faces.
In this series, Ewa Juszkiewicz is also interested in the evolution of
the portrait over the centuries. Her research covers the areas of crossing
aesthetic standards and canons of female portraiture and analysis of
the different ways of depicting women in different periods of cultural
development. There is also the problem of the relationship between the
original work and its reinterpretation, as well as the issue of destruction
of the old in favour of the new. The “new” here refers not to the aesthetic
categories — as the artist tries to follow the aesthetics of the old masters
— but to a change in the perception of the function of the portrait and
the position of the sitter.