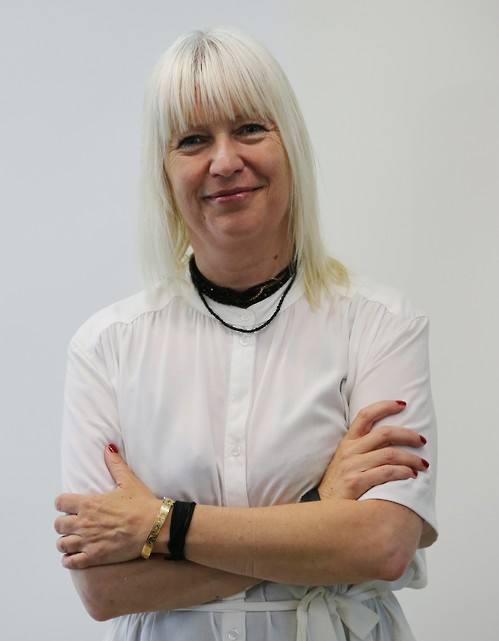 Maria Lind was born in 1966 and is based in Stockholm. She has been the director of Tensta konsthall since 2011 and has carried out exhibitions as a co-curator at the gallery, including Frederick Kiesler: Visions at Work, annotated by Celine Condorelli and six student groups; The New Model with Dave Hullfish Bailey, Magnus Bärtås, Ane Hjort Guttu and Hito Steyerl; Tensta Museum: Reports from New Sweden; Meta and Regina: Two Magazine Sisters in Crime; and The Paths to the Commons are Infiniteby Ayreen Anastas & Rene Gabri, as well as solo exhibitions with Iman Issa, Bernd Krauss and Hinrich Sachs. Also, Lind was the curator of Future Light in 2015 with Rana Begum, Elena Damiani, Shezad Dawood, Mounir Farmanfarmaian, Amalia Pica, Yelena Popova, Haegue Yang and others, as part of the first Vienna Biennial at the MAK and Kunsthalle Wien.
Since 2010, Lind curated Abstract Possible, a research project on abstraction, taking contemporary art as its starting point, with exhibitions in Malmö Konsthall in 2010; Museo Tamayo, Mexico City in 2011; White Space Zurich in 2011; Eastside Projects, Birmingham in 2012; and Tensta Konsthall in 2012. Between 2005 and 2007, she was also the director of IASPIS (International Artist Studio Program in Sweden) in Stockholm, where she curated for exhibitions with Andrea Geyer, Ibon Aranberri, Tommy Stöckel and Saskia Holmkvist, and co-curated the symposium, “Taking the Matter Into Common Hands: On Collaborative Practices in Contemporary Art”. From 2002 to 2004, she was the director of Kunstverein München where she, together with a curatorial team, ran a program which involved artists such as Deimantas Narkevicius, Oda Projesi, Annika Eriksson, Bojan Sarcevic, Philippe Parreno and Marion von Osten. Prior to that, Lind was the curator at Moderna Museet in Stockholm and, in 1998, a co-curator of Manifesta 2, Europe’s Biennale of contemporary art from 1997–2001.
Lind has also taught extensively and contributed widely to newspapers, magazines, catalogues and other publications. She was director of the graduate program at the Center for Curatorial Studies at Bard College from 2008 to 2010, served as an academic advisor of Gwangju Biennale International Curator Course in 2013, and is currently a professor of research at the Art Academy in Oslo. In terms of publications, she is the co-editor of the folowing books: Curating with Light Luggage and Collected Newsletter; Taking the Matter into Common Hands: Collaborative Practices in Contemporary Art,European Cultural Policies 2015; and The Greenroom: Reconsidering the Documentary and Contemporary Art. Her recent co-edited publications include Contemporary Art and Its Commercial Markets: A Report on Current Conditions and Future Scenarios; Performing the Curatorial: With and Beyond Art; and Art and the F Word: Reflections on the Browning of Europe, all with Sternberg Press. She edited Abstraction as part of MIT’s and Whitechapel Gallery’s series “Documents on Contemporary Art.”
Furthermore, she won the Walter Hopps Award for curatorial achievement in 2009 and was a board member of IKT from 2006 to 2011. She holds an MA in Art History and Russian from the University of Stockholm. From 1995–96, Lind was a student at the Whitney Independent Study Program in New York.