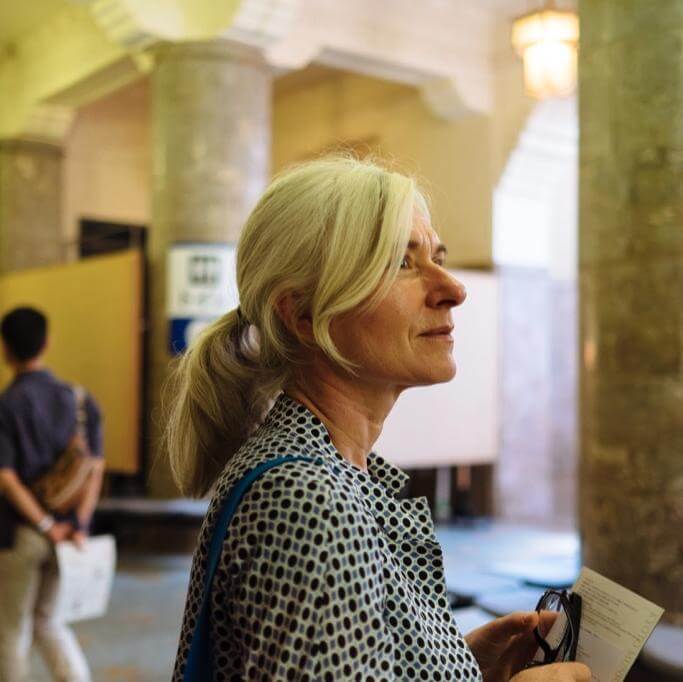 Ann Lislegaard has participated in the 2005 Venice Biennale, the 2006 São Paulo Biennale, the 2013 Lyon Biennale, and the 2014 Biennale of Sydney. Solo exhibitions include shows at the Astrup Fearnley Museum of Modern Art (Oslo, 2007) and the Museum of Contemporary Art Detroit (2009). She is known for 3D film animations and sound-light installations often departing from ideas found in science fiction novels such as Dhalgren by Samuel R. Delany and The Left Hand of Darkness by Ursula K. Le Guin. She finds in science fiction an alternative approach to language, narration, gender roles, sexuality, and concepts of the future. Her Crystal World (after J.G. Ballard) (2006) is set in a hotel that is slowly crystallizing. As the animation moves through the architecture, one encounters furniture by the female architect Lina Bo Bardi, Robert Smithson’s sculpture Dead Tree, and Eva Hesse’s Untitled (Rope Piece). These “virtual replicants” are re-activated in the animation as provisional characters in a setting where time itself is ruined. In Oracles, Owls… Some Animals Never Sleep, which draws on Philip K. Dick’s Do Androids Dream of Electric Sheep?, a computer-animated owl delivers a monologue of aphorisms and latent fragments that consist of prophecies from I Ching and a feminist speaking in tongues. The monologues are interrupted by squeaks of compressed noise, dramatized and distorted samples from Ridley Scott’s Blade Runner. Although it is at times menacing, it is also humorous, a doubled and redoubled self, with its unsynchronized dancing and trance-like movements. Her new work Dobaded Dobaded focuses on Chiaki Kawamata’s 1984 science fiction novel Death Sentences. Lislegaard’s piece features an animated portrayal, reminiscent of a space-time vortex, of the hallucinatory poetic text that forms the crux of the novel’s surreal landscape of history, politics, translation, and language.