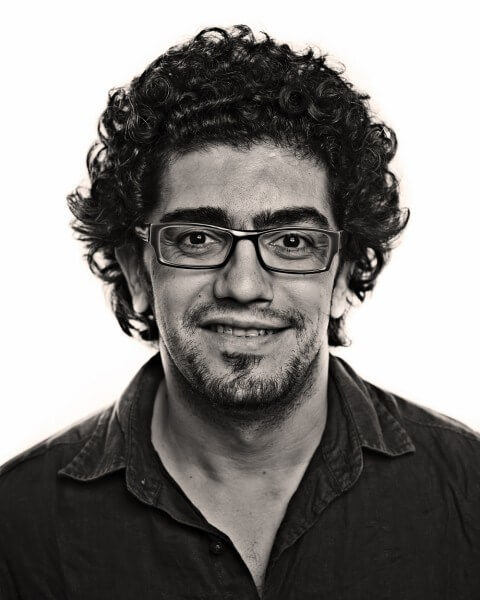 In Basim Magdy’s work we are subjected to the world through a satirical eye. His drawings, sculptures, videos and installations are conceived with a taste for the absurd. They build a universe that has gone off-kilter. Like dreams, elements of a familiar landscape stem out of reality. Past, present and future exist as a single realm and depictions – often of foliage and ruins, astronauts and rockets, airplanes, soldiers, cranes and modernist structures – take on a surreal aggressive quality.
Magdy’s references abound: they range from the slick veneer of advertising, the sinister tropes of science fiction and comic strip to the documentary style of nature, science and technology shows and the apocalyptic tone of biblical stories. Magdy utilizes an array of classical and unconventional media, from spray paint and colored crayons, to chemically altered film stock, photographs and film footage shot by the artist. The result is an aesthetic sensibility of the spaces he creates that is at once retro and futuristic, existing beyond the confines of time, as we know it.
Despite a preoccupation with analogue film, narrative sequences are seldom linear. Fragments, gaps, and clues suggest rather than tell a story. His videos, in particular, progress like a series of still images permeated with a haunted air that heightens our sense of suspense. In almost all his work, poetic but ambiguous titles add another layer to the narrative. Magdy stretches the boundaries of our imagination to test the logic of the truth which often lies somewhere between reality and fiction.