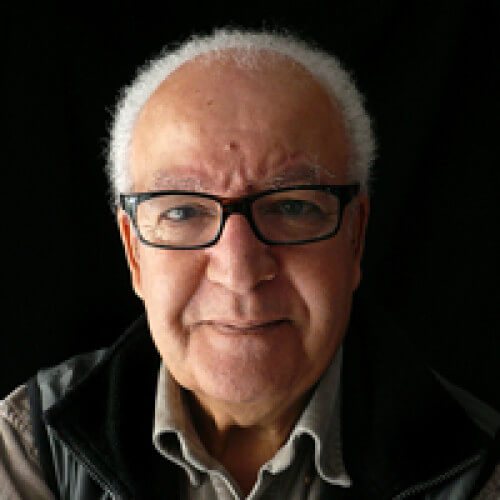 In 1967, he graduated from the Academy of Arts of Santa Andrea in Rome and the Ecole du Louvre
(Department of Oriental Antiquities). He pursued his academic training in Paris, at the Cite Internationale des Arts, on a scholarship from the Tunisian Government.
He’s one of Tunisia’s leading artists and a notable Arab contemporary artist.

Nja Mahdaoui is a visual artist who considers himself ‘an explorer of signs’ and has been described as a
‘choreographer of letters’.
His work inspired by Arabic calligraphy is remarkably innovative as the aesthetic dimension of letters brings forth a sense of the poetic – highly rhythmic – arresting us with its rich abstracts compositions. Famous for his meticulous work in ink on parchment, Mahdaoui stresses the visual impact of his compositions, devoided of actual textual meaning, which he refers to as ‘calligrams’ or ‘graphemes’.

Nja has been Jury member and Honor guest at many international events and biennales (Sharjah International Arabic Calligraphy Biennial, UAE, 2006, The International Arts Biennial of Tehran, Iran, 2006, Abu Dhabi Art Festival in 1989…) and he was member of the International Jury of the Arts Prize of UNESCO from 1993 to 1995.

He has received a number of distinctions and international awards, such as the ‘Great prize for Arts and Letters’ from the Tunisian Ministry of culture in 2006 and the UNESCO great prize for Artcrafts in the Arab world in 2005.

He designed monumental artworks such as windows murals for Facebook new Menlo Park Headquarters in California (2018), the window façade of the ALECSO headquarters in Tunis (2015), KAUST University Campus Mosque in Saudi Arabia (2010), Gulf Air aircrafts (50th Anniversary, 2000), sculptures and tapestries in Jeddah and Riyadh airports, Aramco head office in Dahran, and created many logos, designs and posters for theater plays, books, companies, and organizations such as Amnesty International in 1991…

In addition, he took part in Art Projects, introducing his work in performing art within the framework of theatre and dance. Performances of ‘Total Art’ and ‘Body-Writing’: interactive communication between Arab and European artists, and artists from North America and Asia on the theme “Language and register in exchanges in visual arts“ in Tunisia, France, Italy, Denmark, Japan, Cuba, Canada, Germany and Jordan…

In 2012, he has performed a charity live creation for Noor Dubai Foundation, in collaboration with 4 young Emiratis artists, hosted and organized by Christie’s, under the patronage of H.E. The Minister of Culture for the UAE, Abdulrahman Al Owais.

And recently, a performance with the Italian artist Agostino Ferrari, ‘Meeting signs’ at the Living Art National Center in Tunisia and during the ‘Confini Festival’ at the Municipal Theater F. Cilea in Reggio Calabria, Italy.

Nja participated in numerous exhibitions worldwide including ‘Word into Art’ at the British Museum, ‘The Brush dances & the Ink Signs’ at the Hermitage Museum, ‘Perspectives: Arab & Iranian modern masters’ at the Saatchi Gallery, the ‘Arab Book Art’ at the ‘French National Library’ in Paris, only to mention a few.

They can be found in many private and public collections such as the British Museum in London, the Smithsonian Museum in Washington DC, Mathaf – Arab Museum of Modern Art in Doha, the Institut du Monde Arabe (IMA) in Paris, the National Gallery of Kuala Lumpur.

Exhibitions
Nja Mahdaoui: JAFR. The Alchemy of Signs
The gallery’s third solo exhibition with Nja Mahdaoui unveils his new body of work revealing the full breadth, imagination and scale of his oeuvre that can be fully comprehended and appreciated.
08 Mar 2022 - 07 May 2022
Elmarsa Gallery
Dubai, Sharjah, Abu Dhabi