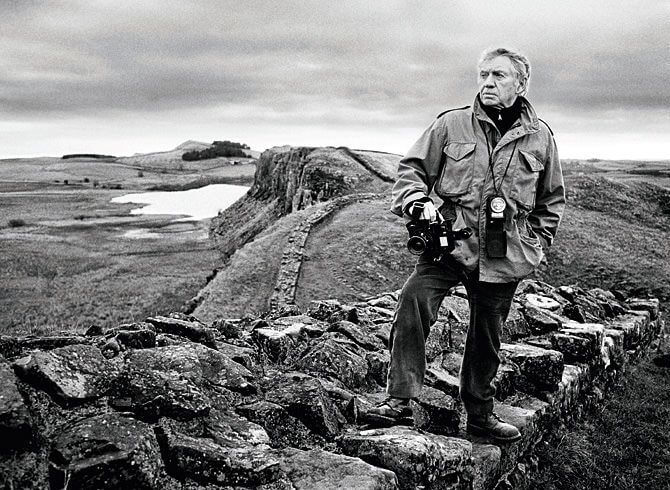 Born in Finsbury Park in London 1935, Don McCullin left school at 15 without qualifications. He signed up to National Service in the RAF, becoming a photographic assistant working on aerial reconnaissance printing. He later bought his own camera, but his mother had to buy it back after he pawned it. This was the camera with which he took his first published photo – of The Guvners, a local Finsbury Park gang, one of whose number had committed a murder – which appeared in The Observer in 1958.
In 1961 he secured a contract working with The Observer, initially based in England, the role eventually took him around the world. McCullin was delighted when they asked him to cover the Cyprus war in 1964; this was the beginning of his long career as a photographer of war and other human disasters.
Between 1966 and 1984, he worked for The Sunday Times Magazine. Pre-Murdoch, The Sunday Times was at the cutting edge of investigative, critical journalism. During the period of his finest magazine work, McCullin worked under Editor-in-Chief Harold Evans and Art Editor David King. His assignments included Biafra, the Belgian Congo, the Northern Irish ‘Troubles’, Bangladesh, the Lebanese civil war, El Salvador, and the Russian invasion of Afghanistan. But he is most famous for his photos of Vietnam and Cambodia.
McCullin faced no restrictions, yet his work, in projecting the realities of war into millions of living-rooms back home, contributed substantially to the growth of anti-war feeling. One reason was that McCullin’s sympathies were with the victims – the poor, the dispossessed, and ordinary soldiers on both sides. He is scathing about working as an ’embedded’ journalist, “We spent years photographing dying soldiers in Vietnam, and they are not going to have that anymore… you have to bear witness. You cannot just look away.”
When he was refused permission to go to the Falklands in 1982, he assumed it was due to some kind of censorship. In fact, as he now knows, it was just down to bureaucracy – the Army had simply run out of press passes. Even so, an era was coming to an end. There has been no reporting from recent conflicts in Iraq or Afghanistan comparable with that of McCullin in Vietnam.
McCullin took huge risks in order to take his photographs. He was threatened with a knife at a Muslim checkpoint in Beirut for having a Falangist press pass, blinded by CS gas during a riot in Derry, and wounded by fragments of mortar shell in Cambodia. But he reports having been most frightened when arrested by Idi Amin’s thugs in Uganda and taken to a notorious prison where they were murdering hundreds of people every day with sledgehammers. He survived; but damaged. He has a head full of demons, and bears a heavy burden of doubt and guilt, “Sometimes it felt like I was carrying pieces of human flesh back home with me, not negatives. It’s as if you are carrying the suffering of the people you have photographed.”
In 1981 Rupert Murdoch took over The Sunday Times; Harold Evans subsequently resigned citing differences over editorial independence in 1982. Soon after, replacement editor Andrew Neil dismissed McCullin after he’d complained about the newspaper’s lack of serious foreign and social coverage under the new regime.
In recent years he continues to travel internationally, including to India and Syria, photographing and printing new works. These newer images include the British landscape, notably of Somerset, where he now lives with his third wife.
In 1993 McCullin was the first photojournalist to be made a Commander of the British Empire (CBE), he is the author of more than a dozen books, and is recognised as one of the greatest war photographers in history.
In 2011 alongside Hamiltons Gallery’s exposition of his platinum prints, the Tate Britain presented a solo exhibition comprising a wide selection of his subjects, and the Imperial War Museum displayed Shaped By War, featuring over 250 photographs, contact sheets and personal memorabilia. In 2013, McCullin was honoured with an exhibition at Visa Pour L’Image, the International festival of photojournalism in Perpignan, to critical acclaim.