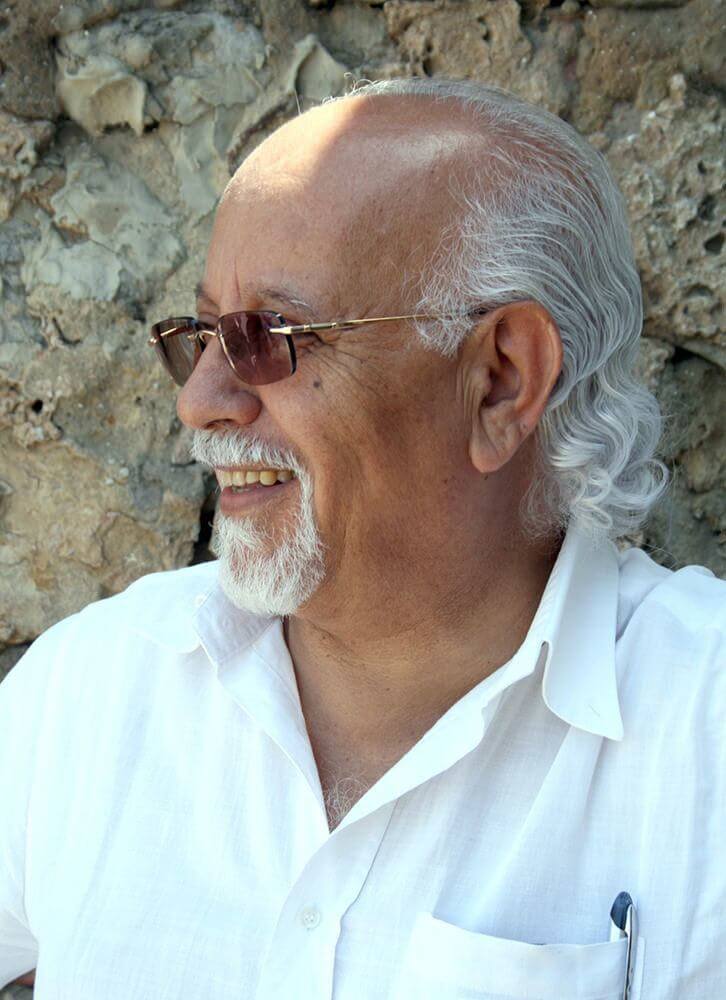 Mohamed Melehi graduated from the École des Beaux-Arts, Tétouan, Morocco, in 1955. He continued his studies abroad, learning fine art in Seville and Madrid, sculpture in Rome, and engraving in Paris. In the early sixties, he travelled to the United States, where he studied at Columbia University (with a scholarship from the Rockefeller Foundation) for two years before returning to Morocco in 1964. It was during this time that Melehi began to explore his cultural heritage as a primary source of inspiration and started using a bolder, more brilliant colour palette.
In 1969, Melehi organized the first open-air group exhibition, held in Marrakech medina’s Jamaa el-Fna Square, in Morocco. Eliciting much acclaim from the public and art critics, this exhibition radicalized the country’s contemporary art scene.
Melehi was Professor of painting, sculpture and photography at the Casablanca School of Fine Arts from 1964 to 1969. In 1978, Melehi and Mohamed Benaissa created the Al Mouhit Cultural Association, a non-political organisation with purely cultural objectives. The result of this venture is the Asilah Cultural Moussem, an annual festival held every summer. A highlight of the festival is the mural painting event, first held in April 1978, a project which has revitalized the formerly dilapidated appearance of the artist’s birthplace. Asilah is now celebrated for its vividly coloured murals, many of which have been created by Melehi.
Melehi is also President of the Moroccan Association of Plastic Arts, and was the Director of Arts for the Ministry of Culture, from 1985 to 1992, and was also the cultural consultant to the Ministry of Foreign Affairs and Co-operations, from 1999 to 2002. He has held numerous solo exhibitions including a retrospective at the Institut du Monde Arabe, Paris, 1995, and the Bronx Museum of the Arts, New York, 1984. He has participated in group shows in Casablanca, Tangiers, Rabat, Marrakech, Baghdad, Algiers, London, Paris, Rome, Zurich, New York, Chicago and Montreal. His work is held in international museum collections such as Centre Georges Pompidou, Beaubourg, Paris, Institut du Monde Arabe, Paris, MoMA, New York, and Mathaf: Arab Museum of Modern Art in Doha.

Exhibitions
Upsurge: Waves, Colour and Illusion
Different starting points lead each to converge on Op art: the perceptual experience is related to how vision functions.