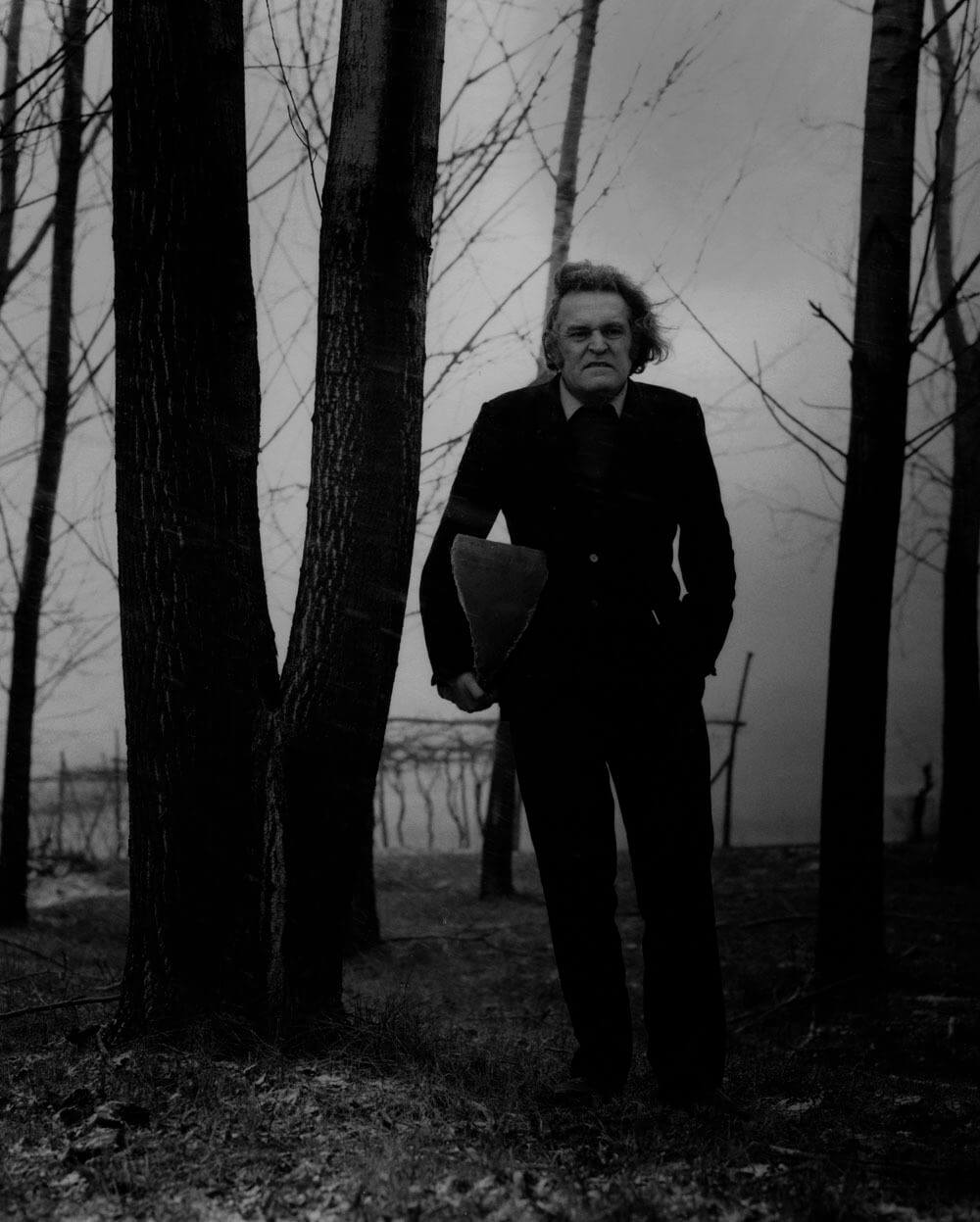 Mario Merz is one of the most celebrated artists to come out of the Arte Povera scene. His first one-man show took place in 1954 at the Galleria La Bussola in Turin, and presented some expressionist-style oils on canvas. By the middle of the 1960s, Merz’ research had developed towards an artistic experimentation that led to “volumetric paintings” (Mila Pistoi): canvas constructions enveloping objets trouvés, organic or industrial materials, whose appearance in the work contributed to place the artist amongst the protagonists of Arte Povera. 1970 saw the start of the numbered Fibonacci series, a progression in which each number is the sum of the two before (0, 1, 1, 2, 3, 5, 8, 13, 21…). Merz interpreted the numerical sequence as the emblem of the dynamics associated with the growth processes in the organic world. The major exhibitions of the 1980s (Palazzo delle Esposizioni di San Marino, 1983 and Guggenheim in New York, 1989) were characterised by a pictorial practice that took on increasing significance, becoming “long and fast”, a natural habitat for wild, “prehistoric” animals such as the rhinoceros, crocodile, tiger, bison, owl, all of which were also bearers of a clear primacy. This intense period, during which the artist also published a sizeable sylloge of writings (Ich will Sofort ein Buch machen/Voglio fare subito un libro, Sauerländer, Aarau-Frankfurt and Hopefulmonster, Florence), was followed by a phase characterised by a return to the essential nature of matter and line (one-man show at the Fundaçâo de Serralves, Porto, 1999). Considerable importance was given to drawing which became the protagonist of a series of large installations. The artist exhibited at the Carré d’Art – Musée d’Art Contemporain, Nîmes (2000) and for the first time in Latin America with a one-man show at the Fundación Proa, Buenos Aires (2002). He took part in Zero to Infinity: Arte Povera 1962-1972 (2001), the first anthological exhibition on Arte Povera in the United Kingdom, organised by Tate Modern in London and the Walker Art Center of Minneapolis. The 6th November 2002 saw the inauguration of the permanent installation, Igloo fontana, for the railway bypass in the city of Turin. Amongst the many honours received were an Honorary Degree from the Dams in Bologna (2001) and the Praemium Imperiale of the Japan Art Association (2003). Among the personal exhibitions set up after his death, remarkable is the retrospective organized by Fondazione Merz, Galleria d’Arte Moderna and Castello di Rivoli, in Turin (2005); the thematic show Drawings at Kunstmuseum Winterthur and Fondazione Merz (2007); Pageantry of painting at Fondazione Merz (2010); What Is to Be Done? (Henry Moore Institute, Leeds, and Bildmuseet, Umeå (2011-12); Mario Merz Arnulf Rainer. Tiefe weite (Fragmente) at Arnulf Rainer Museum, Baden (2013); Pace Gallery, London (2014); and Mario Merz. Città Irreale, Galleria dell’Accademia, Venezia (2015).

Exhibitions
Marisa and Mario Merz. A pencil point can surpass consciousness
An unprecedented exhibition project, curated by Mariano Boggia, presenting the work of Marisa and Mario Merz in the unusual light of the times.
27 Apr 2021 - 09 Jan 2022
Fondazione Merz
Turin

Exhibitions
Mario Merz
A long-term exhibition of work by Mario Merz, a central figure in the Arte Povera movement that emerged in Italy in the late 1960s.
20 Nov 2020 - 31 Dec 2021
Dia:Beacon
New York

Exhibitions
Mario Merz: Time Is Mute
An exhibition which surveys the provenance of a body of work suspended in a pre-historic time of sorts, at odds with the discourse of modern-era history.
06 Jun 2020 - 30 Aug 2020
Museo Nacional Centro de Arte Reina Sofía
Madrid
Art Spaces