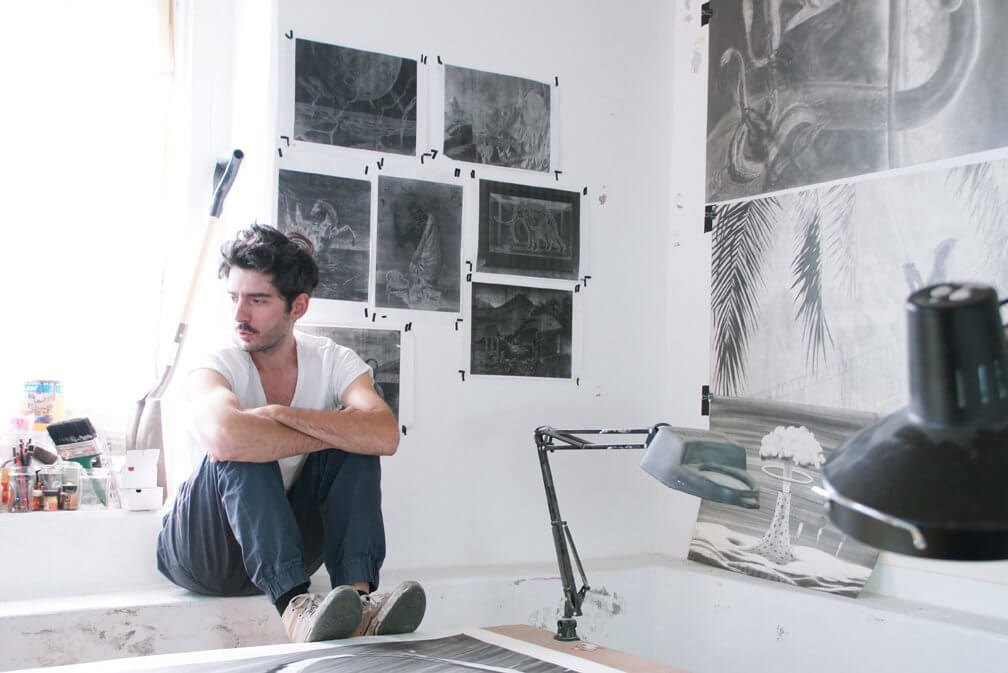 Michael´s recent works include speculative models of shelters and shrines, digital cutout collages and graphite drawings of explicit detail, all produced in an impulsive yet meticulous way, without plans or preconceived ideas. “Ideas do not make the work but rather the work generates ideas.” In his practice the immediacy of the craft and the accumulated knowledge of the hands, transcend linguistic and intellectual types of thinking.
Michael is interested in making art that will resonate with nerds or kids as much as it will with the art crowd. Thus he avoids “art that looks like Art”. Instead the works tend to resemble utilitarian objects (architectural models, book illustrations, etc) that only hint at Modern Art but nevertheless lack specific function and raise questions about their reason for existing. In his own words, “I want to avoid didacticism and instead create a sense of puzzlement that elicits the viewer’s curiosity, raising questions about alternative universes, alternative histories and prehistories.” It is The Exotic and The Distant that intrigue him since he believes that in order to produce critical thinking about the present, one needs to escape its gravitational self-internalizing pull and look from a clear distance.
In many cases the works are self-vandalized. Pen doodles on graphite seascapes, collages that have been crumbled and subsequently treated with coffee and dust, graffitti on architectonic models, sculptures made of scraps of previous sculptures. Michael indulges in being the creator and the destroyer of his own works but primarily this process reveals his dialectic method, in which (self) doubt is the drive behind creativity. No work is complete if it hasn´t been argued against multiple times. This procedure yields brand-new works that curiously look old. What Michael suggests is that ruination far from being some distant future possibility, is a permanent ever present backdrop against which civilizations mistakenly think they are progressing. Hence, the assumption of Evolution as a force for progress, is constantly probed.

Exhibitions
What do you dream of? The Mohole Flower and other tales
This is an exhibition in the present tense; an exhibition about daydreams and uncanny nightmares, about...
21 Aug 2018 - 27 Oct 2018
Galeria Luisa Strina
São Paulo