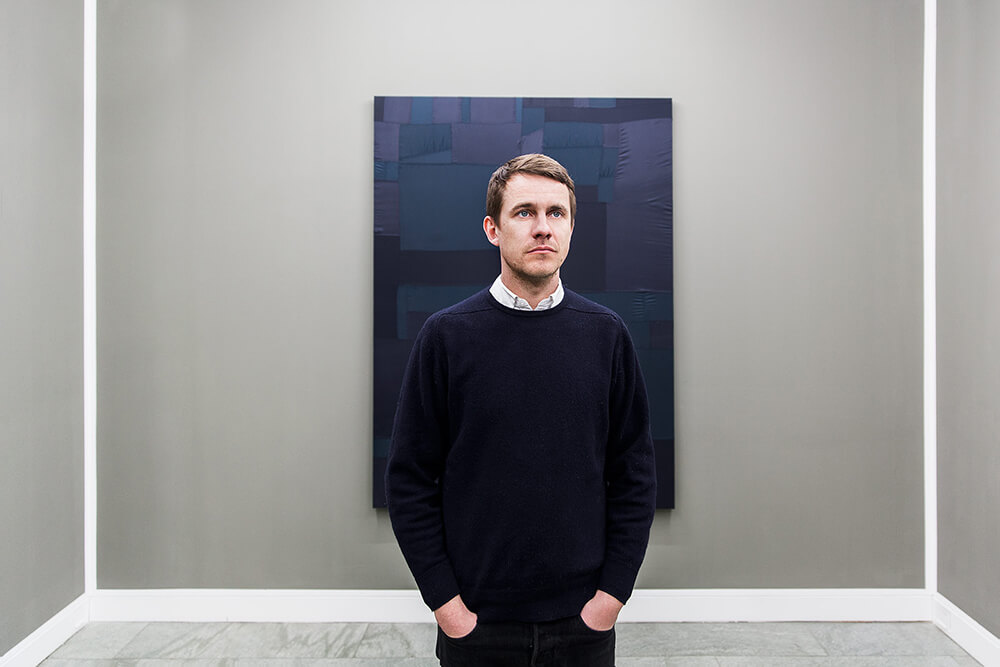 The work of Simon Mullan communicates through commonplace domestic materials and shop bought commodities alongside high production video, performance, and photography. Infused with an anarchic sense of humour, he consciously collapses concepts of high and low culture in playful and provocative works of art that exist both inside and outside the gallery. From the beer-guzzling youth to the art aficionado, recognizable clichés of identity are unpicked through the symbols, actions and ideals they are built upon.
His long-held interest in how social tribes project their comradery is embodied in the recurrent use of alpha bomber jackets as a raw material. For the ongoing series Alpha, the artist toys with the objects semiotics. The familiar item of clothing, a uniform, adopted by ring wing militants, Hollywood actors and Ukrainian rebel alike – are cut up into pieces and then roughly stitched together in large fabric collages. This metaphorical stripping, destruction, and then patching back together provides an unconventional portrait of a collective identity, whilst simultaneously revealing its literal and figurative fragility.
Mullan’s creative process, producing work intuitively, with conscious economy, allows the artist to fluctuate between personas of the naive craftsman and self-aware art world rebel. In Popularis, 2015, Mullan transforms bathroom tiling into abstract wall art, accentuating the visual similarities between them and blurring the line between working class builder and artistic intellectual. Video work Ambiguus, 2012, featuring a pumping electronic soundtrack over views of tranquil landscapes, makes no attempt to define its intended artistic worth through politically savvy titling or attached elucidation. By actively pushing against our own preconceived notions of the artist, the work finds Mullan questioning his own role in society along with the roles of those around him.
Shifting between material, context and technique, Simon Mullan’s adaptability as an artist mirrors the far-reaching themes of identity, gender and symbolic value that his work embodies. Established notions of culture and identity collide in art that acknowledges both the deep-rooted connotations of social order and their endless potential for reinvention.