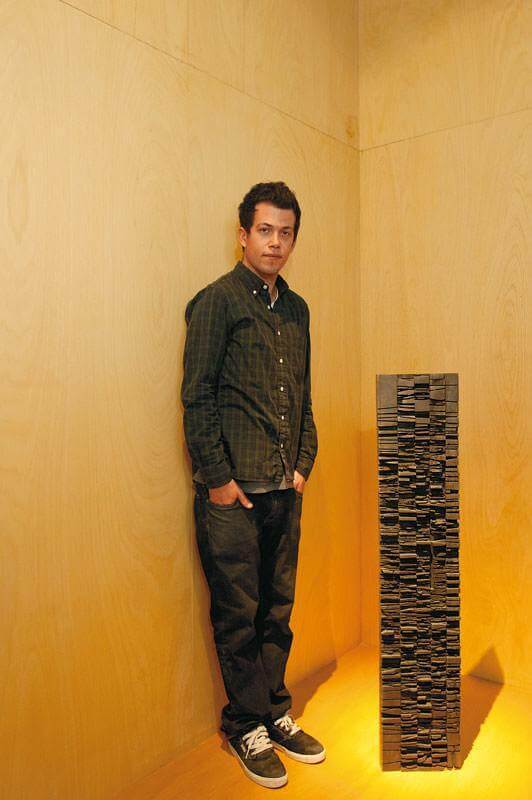 João Vasco Paiva is a Hong Kong-based artist who observes the complex and continuously shifting characteristics of objects and spaces. Interested in semantics – the visual language each structure, perimeter and component may possess – Paiva examines the particular lexicon of constructed, detruded or neglected units, systematically documenting, analysing and abstracting them to compose a process-driven composition that is simultaneously an artwork. At the heart of Paiva’s practice is an interest in deciphering the constructed sum of human activities, and using modes of production and fabrication to peel the intricate layers that comprise the structures of contemporary life.
A graduate from the Porto Arts Institute, João Vasco Paiva moved to Hong Kong in 2006 to complete a Master of Fine Arts in Creative Media. Upon graduation with distinction in 2008, Paiva set to create works in multiple mediums, which consistently explore how urban spaces may serve as catalysts for aesthetic production. While Paiva’s work is intrinsically tied to Hong Kong, his work resounds with dense urban environments around the globe: it suggests that cities, regardless of location, share certain visual and physical characteristics that, following a process of documentation and abstraction, may be reduced to readable and informative truths.
At the core of Paiva’s practice is therefore an interest in deconstructing complex urban environments to create a set of identifiable codes: a universal urban alphabet, one may say. The aim of Paiva’s artistic process thus extends beyond mere simplification; it is about identifying a common language that reverberates both on a local urban level as well as on an international cosmopolitan level; it is about unveiling a linguistic system, which is shared by multiple countries and is intrinsic to our current age of hyper-modernity.
João Vasco Paiva is considered one of Hong Kong’s leading emerging contemporary artists and has been exhibited widely in museums as well as galleries from Hong Kong and Portugal to the UK, Australia, Hungary and New York. Recently, Paiva was selected for the Encounters section of Art Basel Hong Kong 2015 by Alexie Glass-Kantor, completed a residency at Lichtenberg Studios, Berlin and was part of a group exhibition at the Witte de With, Rotterdam as well a travelling exhibition at Artsonje, Seoul, OCT Contemporary Art Terminal, Shanghai and MAAP, Brisbane. Furthermore, Paiva held a major solo exhibition at the Orient Foundation in Macau and upcoming exhibitions include a solo show at Counter Space, Zurich. Finally, Paiva is the recipient of multiple awards, including the Hong Kong Emerging Artist Grant and the International Artist Support Grant awarded by the Calouste Gulbenkian Foundation in Portugal.