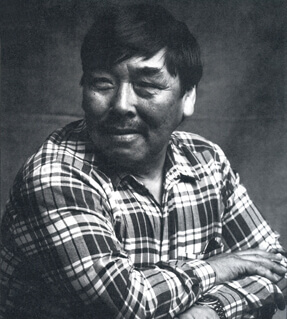 Grew up in Ikirisaq camp on south Baffin Island, where his father Pootoogook was the leader, the artist moved to Cape Dorset in 1950s with his wife Shooyoo, participating in the foundation of the West Baffin Eskimo Co-operative in 1959, and serving for several years as president of its Board of Directors, being also a member of the Royal Canadian Academy of the Arts. Kananginak’s works has been showcased in many galleries and public institutions, featuring not only his prints, but also his sculptural works. Dealing mostly with the representation of Arctic wildlife, the artist had a unique ability in drawing species of birds and the material and cultural traditions of the Inuit.