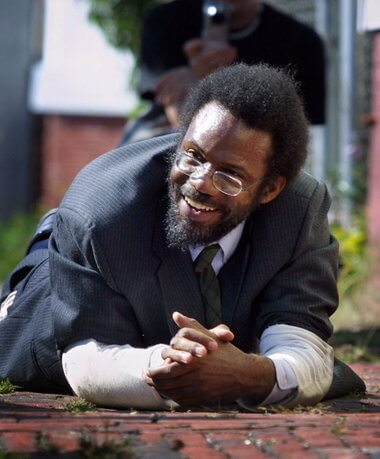 Pope.L (b.1955, Newark, NJ) is a visual and performance-theater artist and educator whose work investigates the binaries and preconceived notions embedded within contemporary culture. He is chiefly known for his provocative performances and urban interventions many of which have transpired unceremoniously in public spaces such as parks and sidewalks. Pope.L has been making multi-disciplinary works since the 1970s, which examine his concerns about language, gender, race, and social value. He currently lives and works in Chicago, IL, where he is an Associate Professor in the Department of Visual arts at the University of Chicago. His work has been exhibited and performed at Museum of Modern Art in New York, The Whitney Museum in New York, Museum of Contemporary Art Los Angeles, The New Museum in New York and the Renaissance Society in Chicago. He has also had solo exhibitions at institutions including the Carpenter Center at Harvard University, the Santa Monica Museum of Art, and the Kunsthalle Wien. Both the MIT Press and the Renaissance Society, Chicago have published monographs on his practice, titled The Friendliest Black Artist in America (2002) and Showing Up To Withhold (2014) respectively. He was most recently the focus of a solo exhibition at the Geffen Contemporary at the Museum of Contemporary Art, Los Angeles. Other recent exhibitions and performances include Radical Presence: Black Performance in Contemporary Art at the Studio Museum in Harlem and the Grey Art Gallery, New York; Cage Unrequited, in conjunction with Performa, NY; Flux This! With Pope.L and Special Guests at Museum of Modern Art in New York, NY; and The Long White Cloud, Te Tuhi Gallery, Auckland, New Zealand.