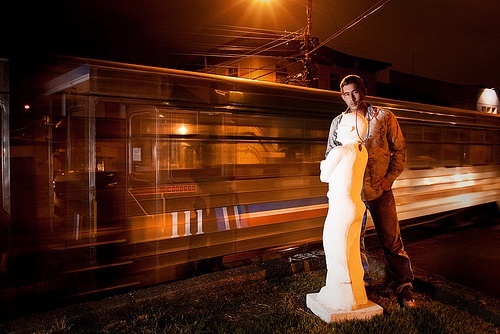 In tandem with his art practice, which began in the 90s, he has been working at TEOR/éTica since he played an active role in the Estrecho Dudoso mega-project by managing the Kiosk space in the Central Park Costa RIca.
He is currently in charge of the library and of attending to and orienting visitors. He formed part of the Al Margen workshop, conducted at the La Reforma Penitentiary in Costa Rica. While in prison he took part in national art contests and exhibitions in San José with pieces that were awarded honorary mentions. On regaining his freedom in 2002, he alternated between working as a restaurant waiter and his art practice, then went on to pursue studies in audiovisual production at the National Learning Institute.
His prison experience plays a leading role in his work, both collective and individual. His first piece from this period, in dubia tempora (2005), carried out collectively with writer María Montero, has been widely exhibited as an artist’s coffee-table book with images of objects and instruments made using forbidden or waste materials from Costa Rican jails. Obsessively refined, polished and elegant and accompanied by intelligent, ironic texts, the images approach the subject in an unexpected, original way, while playing on the language of criminal causes.
There is a peculiar perception of the passing of time and its implications for a body immersed in that particular time frame, a question of physical and mental limits, and a constant reflection on death that glides over the lives of inmates and the Egresados(the Leavers), the title of another 2007 work, a photo montage that commemorates disappeared fellow inmates in an urban landscape consisting of mausoleums in the General Cemetery.
His art practice thus stems from his personal experiences in the world of incarceration, silence, insecurity, but also imagination and creativity directed at finding means of survival. He is able to create lucidly escapist structures while constantly maintaining an ironic and even humorous outlook that prevents him from lapsing into misery and self-pity.