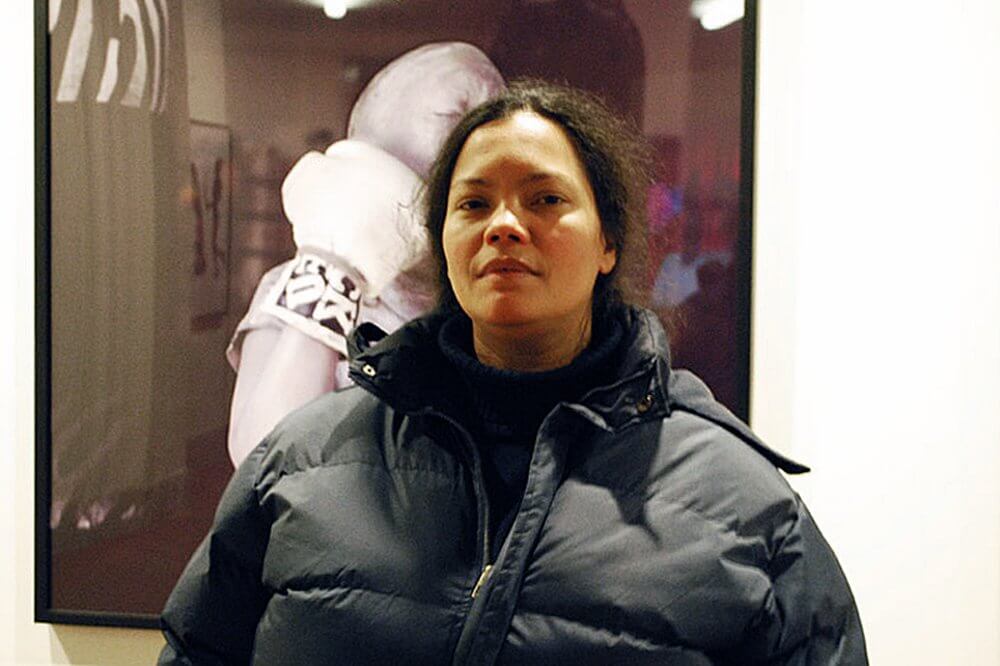 Tracey Rose is best known for her performances, video installations, and photographs. She attended the University of the Witwatersrand in Johannesburg in Fine Arts where she obtained her B.A. in 1996. She taught at Vaal Triangle Technikon, Vanderbijl Park, South Africa and at the University of the Witwatersrand. In February and March 2001 she was artist-in-residence in Cape Town at the South African National Gallery where she developed her work for the Venice Biennale 2001 curated by Harald Szeemann. Tracey Rose is represented in the US by Christian Haye of The Project.
Since her mid nineties graduation from the University of Witwatersrand, Rose has had an extremely busy few years internationally, as her CV shows. In much of her work in this time, Rose has investigated questions of gender and colour, often through the visual motifs of her own body and body hair. In Ongetiteld (Untitled), shown on ‘Democracys Images’ at the Bildmuseet in Umeåï¿½, Sweden in 1998, Rose again used surveillance cameras to film herself shaving off all of her bodily hair. In the catalogue, Rose describes this act as being “about both demasculating and de-feminising my body, shaving off the masculine and feminine hair. This kind of de-sexualisation carries with it a certain kind of violence. The piece is about making myself unattractive and unappealing. But what was disconcerting was that I suddenly became attractive to a whole different group of people. Perhaps there was not enough of a sense of penance and flagellation in the work.”
For ‘Graft’, the Colin Richards curated show at the SANG on the 2nd Johannesburg Biennale, Rose presented Span I and Span II. In this, Rose sat with shaved head on a sideways TV displaying a closeup image of a reclining nude, a classic art history image. Head bent, Rose busied herself with knotting strands of her own shaven hair. The bravura performance took place inside a glass cabinet. Rose says, “With my naked body on the TV I wanted to negate the passivity of the action of the reclining nude. In doing the piece, I had to confront what I wasn’t supposed to do with my body. The work is a cleansing act, a coming out. The knotting not only invokes the rosary beads of my childhood, but also the working with one’s hands, and the meaning of this handiwork as a form of empowerment”. In Span I, the complementary part of the piece, a red-overalled prisoner incised text on to the opposite wall of the gallery, memories from Rose’s childhood, often dealing with the role that hair, how straight it was, how curly, and thus how it defined race, had played in her childhood. “The wall’s a purge and a perversion of the idea of a lack of penance, where I become vindicated through the act of employing an ex-prisoner to ‘perform’ my confession.”
Rose’s work responds to the limitations of dogma and the flaws in institutionalised cultural discourse. Always evident in her work is the artist’s insistence in confronting the politics of identity, including sexual, racial, and gender-based themes. According to Jan Avgikos, “part of Rose’s appeal is her fluid referencing of ’60s and ’70s performance art”.