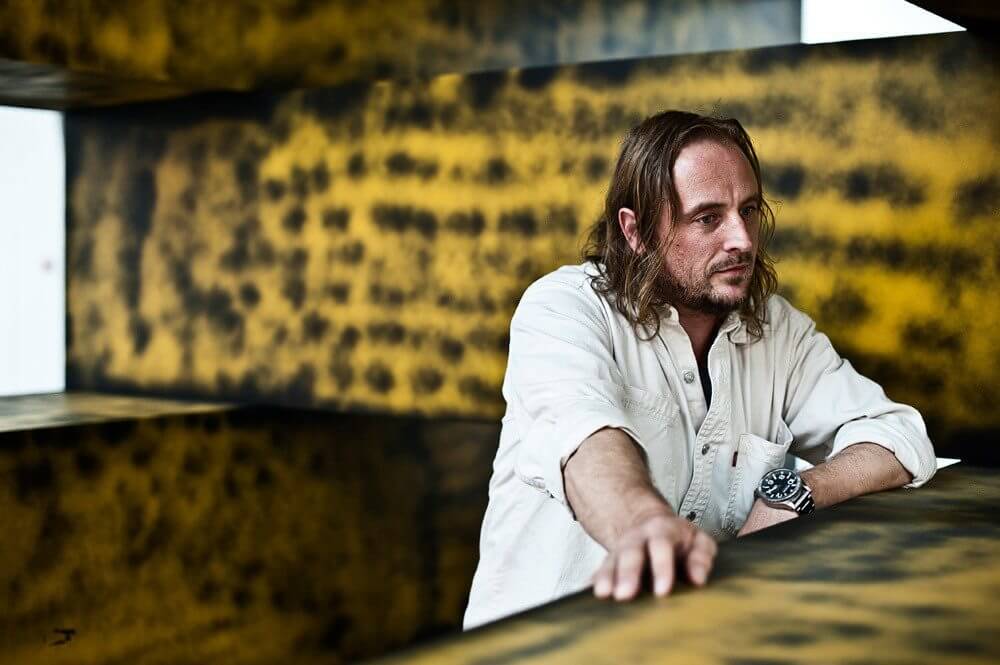 Sterling Ruby (American, b.1972) was born on an American military base in Germany, and was raised in New Freedom, PA. After working in construction for several years, he attended the Pennsylvania School of Art & Design. Ruby then went on to receive a BFA from The School of the Art Institute of Chicago, and an MFA from the Art Center College of Design in Pasadena, CA, where he was a teaching assistant for artist Mike Kelley (American, 1954–2012). Ruby works in a variety of media, including ceramic, painting, collage, urethane sculpture, and video. Heavily influenced by the punk movement, as well as Graffiti and Street Art, the artist’s works are often intentionally marked up and defaced.
Through examining the most marginalized members of society, Ruby seeks to expose the cultural mechanisms of control that underlie contemporary life. In 2008, his massive installation Supermax was first shown at the Museum of Contemporary Art, Los Angeles Design Center. For this show, Ruby referenced American maximum security prisons through aerosol paintings, collages, and massive geometric sculptures made of Formica, urethane, and brass, as well as soft sculptures in the form of blood drops.
Ruby has exhibited nationally and internationally at the Ullens Center for Contemporary Art in Beijing, China; The Museum of Modern Art in New York, NY; the Museum of Contemporary Art in Chicago, IL; the Institute of Contemporary Art in Philadelphia, PA; the Walker Art Center in Minneapolis, MN; the Garage Centre for Contemporary Culture in Moscow, Russia; the Saatchi Gallery in London, UK; and MACRO in Rome, Italy; among others. His work is also part of the permanent collection of institutions worldwide, including the Solomon R. Guggenheim Museum in New York, NY; the Hammer Museum in Los Angeles, CA; the Los Angeles County Museum of Art in Los Angeles, CA; the Museum of Contemporary Art in Chicago, IL; the Seattle Art Museum in Seattle, WA; and the Tate Collection in London, UK. His work was also featured in the 2014 Whitney Biennial.