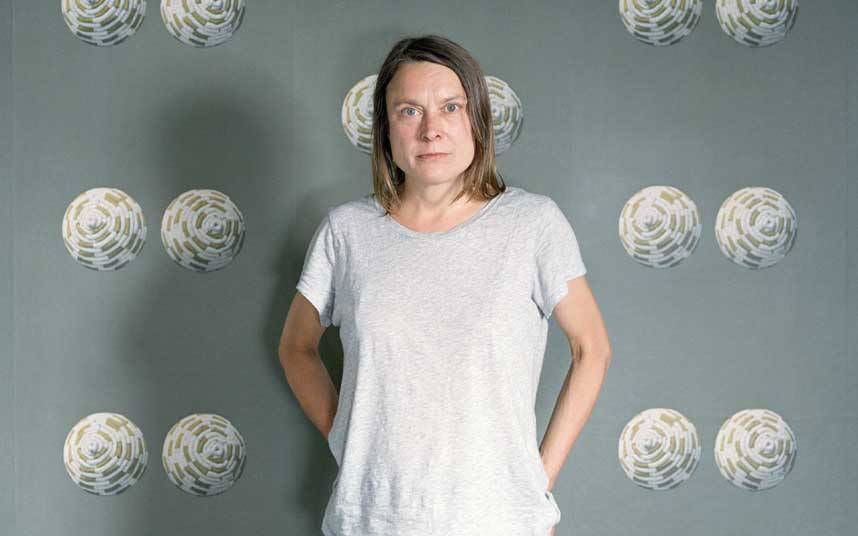 She emerged as one of the major Young British Artists during the 1990s, with a body of highly provocative work. In the early 1990s she began using furniture as a substitute for the human body, usually with crude genital punning. In works such as Bitch (table, t-shirt, melons, vacuum-packed smoked fish, 1995), she merges low-life misogynist tabloid culture with the economy of the ready-made, with the intention of confronting sexual stereotyping. As with earlier works in which she had displayed enlarged pages from the Sunday Sport newspaper, the intention was to attack stereotyping on its own ground, using a base language given critical viability by an affinity to previous movements such as Situationism and Surrealism. She is also known for her confrontational self-portraits, such as Human Toilet Revisited (1998), a color photograph in which she sits on a toilet smoking a cigarette. In her 2000 solo exhibition The Fag Show, she explored her obsession with cigarettes as a material for art, suggesting the connection between smoking and sexually obsessive activity. The morbidity and provocative nature of her work has often elicited comparisons with Francis Bacon and Damien Hirst—her androgynous occupation of this masculine low-life domain gives her work much of its critical character.
Lucas studied in London at the Working Men’s College, London College of Printing (now London College of Communication), and Goldsmiths College. She represented Great Britain at 56th Venice Biennale (2014). Her work has been the subject of solo exhibitions at the Whitechapel Gallery (London, 2013) and the Henry Moore Institute (Leeds, 2012), and she has participated in group shows at the New Museum (New York, 2013), Palais de Tokyo (Paris, 2012), and Tate Britain (London, 2004).

Exhibitions
Shit and Die
Seeking to create an engaging and original project that actively involves the city and which addresses...
05 Nov 2014 - 11 Jan 2015
Palazzo Cavour, Turin
Turin