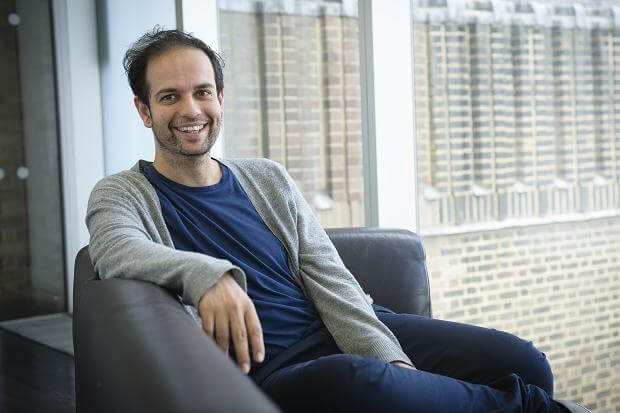 Born in London in 1976, the Berlin-based artist Tino Sehgal constructs situations that challenge conventional art-and-spectator relationships, focusing on the fleeting gestures and social subtleties of lived experience rather than on material objects. In Sehgal’s works, “players” enact all manner of conversational or choreographic activities: Kiss (2002), for instance, involves two dancers in a gallery whose movements allude to various amorous scenes from throughout art history; while This Situation (2007) takes the form of a salon in which six players enact a conversation game in which each point begins with a statement from the history of political and social thought. Visitors are engaged to participate in the discussion that follows, and thereby help construct the endlessly renewable philosophical practice that the work generates. Sehgal’s practice has been shaped by his formative studies in dance and economics, and uses the museum and related institutions—galleries, art fairs, and private collections—as its arena. He considers visual art to be a microcosm of our economic reality, as both center on the production of goods and their subsequent circulation. Sehgal seeks to reconfigure these conditions by producing meaning and value through a transformation of actions rather than solid materials. Along similar lines, he refuses documentation of his work through photographs, film, or video—mediums that would reify his work’s ephemeral situations and result in ancillary material products that could potentially be bought and sold. On the other hand, Sehgal does not subscribe to an ascetic, unrealistic ideal of a world without financial exchange: His situations may be bought and sold, and are infinitely repeatable. Through this delicate balancing act, Sehgal draws out difficult conversations about the function of art and possible new ways of understanding value, both aesthetic and economic. Sehgal has had solo shows at the Van Abbemuseum, Eindhoven, Netherlands (2004); Fundao Serralves, Porto, Portugal (2005); Kunstverein Hamburg, Germany; Kunsthaus Bregenz, Bregenz, Austria; and Stedelijk Museum, Amsterdam (all 2006); Institute of Contemporary Arts, London (2006–07); MMK Frankfurt (2007); Walker Art Center, Minneapolis (2007); CCA Wattis Institute for Contemporary Arts, San Francisco (ongoing since 2007); Trussardi Foundation, Villa Reale, Milan; and Magasin 3, Stockholm Konsthall (both 2008); and Solomon R. Guggenheim Museum, New York (2010).

Exhibitions
Tino Sehgal
For the Special Project 2022 of ART CITY Bologna, Tino Sehgal, one of the most radical artists to have emerged in recent years, has been invited.
13 May 2022 - 15 May 2022
Bologna