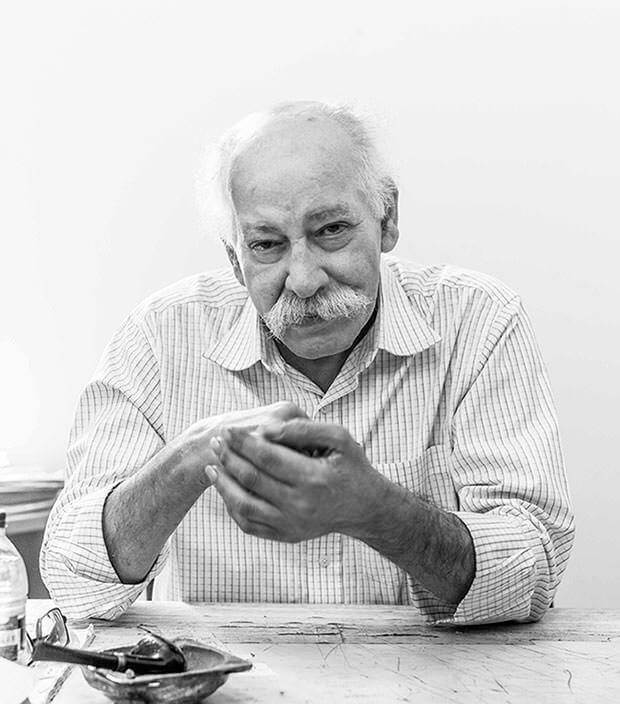 Hassan Sharif lived and worked in Dubai. He has made a vital contribution to conceptual art and experimental practice in the Middle East through 40 years of performances, installations, drawing, painting, and assemblage. In his early artistic maturation, Sharif rejected calligraphic abstraction, which was becoming the predominant art discourse in the region in the 1970s. Instead, he pursued a pointedly contemporary art vocabulary, drawing on the non-elitism and intermedia of Fluxus and the potential in British Constructionism’s systemic processes of making.
Sharif graduated from The Byam Shaw School of Art, London, in 1984 and returned to the UAE shortly after. He set about staging interventions and the first exhibitions of contemporary art in Sharjah, as well as translating art historical texts and manifestos into Arabic, so as to provoke a local audience into engaging with contemporary art discourse.
His works have been collected by private and public institutions such as: Guggenheim Abu Dhabi, Louis Vuitton S.A, Barjeel Art Foundation, Sharjah, Aldar, Abu Dhabi, Sittard Art Center, Netherlands, Centre Pompidou ,Paris, Arab Museum of Modern Art, Doha.
In addition to his own practice, Sharif has encouraged and supported several generations of artists in the Emirates. He is a founding member of the Emirates Fine Art Society (founded 1980) and of the Art Atelier in the Youth Theatre and Arts, Dubai. In 2007, he was one of four artists to establish The Flying House, a Dubai institution for promoting contemporary Emirati artists.
Hassan Sharif is one of the artists representing the country at the UAE National Pavillion during the 56th Venice Biennale.

Exhibitions
Out of Place
Our place in this forever shifting world is the starting point for “Out of Place”, a group...
22 Mar 2021 - 23 May 2021
Gallery Isabelle van den Eynde
Dubai, Sharjah, Abu Dhabi
Art Spaces