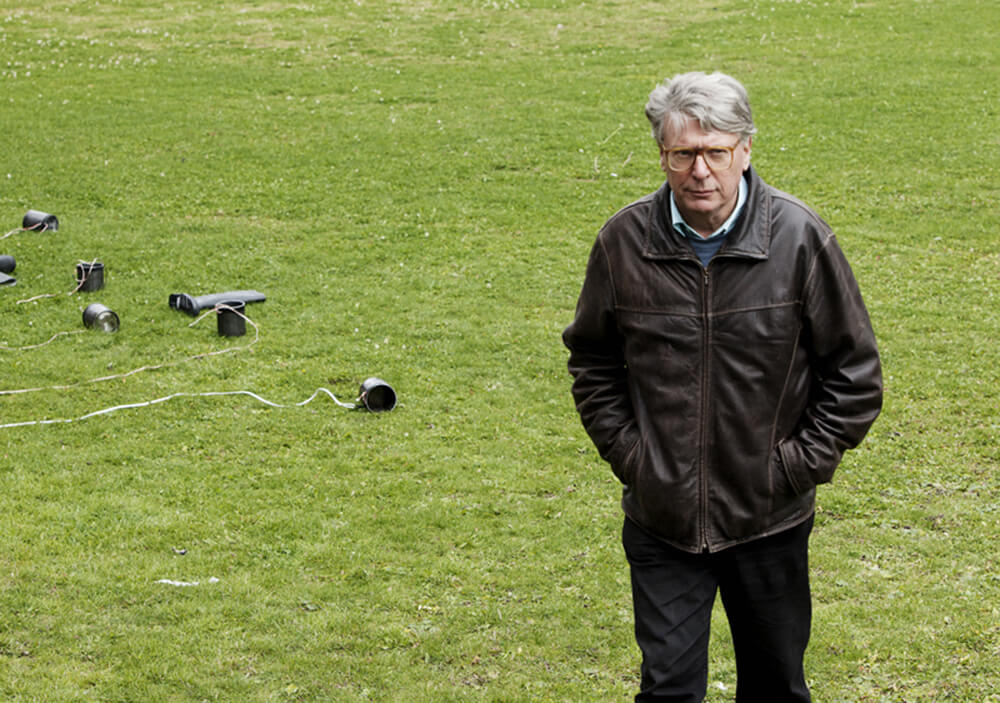 Roman Signer is principally a visual artist who works in sculpture, installations photography, and video. He started his career as an artist later in life at the age of 28, after working as an architect’s draughtsman, a radio engineer apprentice, and a short stint in a pressure cooker factory. He holds degrees from arts institutions in Switzerland and Poland. He studied at the Schule für Gestaltung in Zurich and Lucerne between 1966 and 1971. He studied at the Academy of Fine Arts in Warsaw, Poland from 1971-1972.
Signer’s work has grown out of, and has affinities with both land art and performance art, but they are not typically representative of either category. It is often being described as following the tradition of the Swiss engineer-artist, such as Jean Tinguely and Peter Fischli & David Weiss.
Signer’s “action sculptures” involve setting up, carrying out, and recording “experiments” or events that bear aesthetic results. Day-to-day objects such as umbrellas, tables, boots, containers, hats and bicycles are part of Signer’s working vocabulary. Following carefully planned and strictly executed and documented procedures, the artist enacts and records such acts as explosions, collisions, and the projection of objects through space. Signer advocates ‘controlled destruction, not destruction for its own sake’. Action Kurhaus Weissbad (1992) saw chairs catapulted out of a hotel’s windows; Table (1994) launched a table into the sea on four buckets; Kayak (2000) featured the artist being towed down a road in a canoe. In documenta 8 (1987), he catapulted thousands of sheets of paper into the air to create an ephemeral wall in the room for a brief, but all the more intense moment. As the Swiss representative at the Venice Biennale in 1999, he made 117 steel balls fall from the ceiling on to lumps of clay lying on the ground. Many of his happenings are not for public viewing, and are only documented in photos and film. Video works like Stiefel mit Rakete (Boot with Rocket) are integral to Signer’s performances, capturing the original setup of materials that self-destruct in the process of creating an emotionally and visually compelling event.
Signer gives a humorous twist to the concept of cause and effect and to the traditional scientific method of experimentation and discovery, taking on the self-evidence of scientific logic as an artistic challenge. As well as working in his studio, which he calls his lab, Signer often takes off to the Swiss mountains to conduct larger experiments. A recent example of his installation work was “Accident as sculpture” (Unfall als Skulptur)(2008) in which Signer had a three-wheeled delivery car, loaded with water barrels, roll down an 11 m high ramp and up the other side. At the apex, the vehicle overturned and crashed to the ground. The resulting chaotic arrangement constituted the exhibition at de:Kunstraum Dornbirn. Another example, the video 56 Small Helicopters (56 Kleine Helikopter) (2008) shows a squadron of 56 remote-controlled toy helicopters as they rise into the air, collide with each other, carom off the ceiling and walls, and finally die in mechanical spasms on the floor.
In 2011, Signer showed Restenfilme or film leftovers, always presented in a darkened room furnished with several rows of wooden chairs, one of which rocks unassisted on its back legs. The projection gathers actions, which Signer never constituted as full artworks, as well as shots of locations that were possible staging grounds for potential works.
A collaborative film from 1996 with director Peter Liechti titled “Signer’s Koffer” (“Signer’s Suitcase”) documents a series of his “action sculptures” along with interviews of Roman Signer and other characters encountered during his travels performing the work.