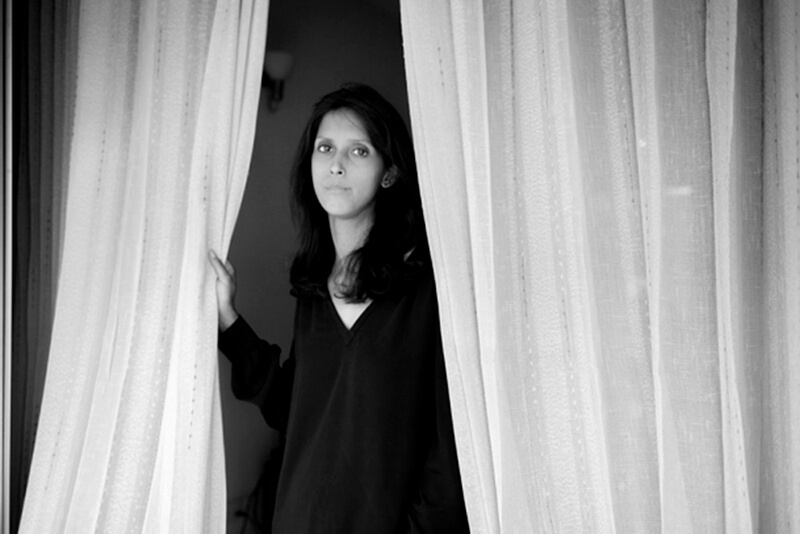 Ayesha Sultana’s work explores the concept of space. Her series, Outside the Field of View, is anchored in ‘seeing space in continuum, exploring gaps in visual memory, and looking at the periphery and what is overlooked in plain sight.’ As an artist, Ayesha works with diverse mediums including sound installation, drawing, photography and painting to express her ideas. Using drawing and photographs as primary tools for this series, Ayesha synthesizes her observations of her surroundings and space. Her work is lucid, yet not simplistic. To Ayesha, ‘space seems relational, a field emerging as a result of matter and its parts, in the movement or weight of its fragments, not necessarily marked by a beginning or an end, but a structure or a space that never ends—the periphery.’
A part of her series examines the nature of transience. Ayesha does this by introducing partially obliterated, solarized and deliberately scratched photographs. Another body of work features graphite drawings where she attempts to understand the concept of continuation. ‘The graphite drawings present configurations and arrangements of geometric shapes and spatial structures, in a frame-by-frame progression of image and time, once again bringing forth my interest in the visual understanding of continuation, direction and possibly a form of meditative infinity.’
Ayesha received a BFA in Visual Arts in 2007, and went on to pursue a Post Graduate Diploma in Art Education at the Beaconhouse National University, Lahore. She has recently exhibited at the Dhaka Art Summit in Dhaka, Listen Up! in New Delhi and at Alhamra Art Gallery in Lahore, to name a few. She also completed a curatorial research residency at Gasworks, London (2013), and is a member of the Dhaka-based artist-run organization, Britto Arts Trust. In 2014, Ayesha became the recipient of the Samdani Art Award. Outside the Field of View, opened at Experimenter, Kolkata last year.