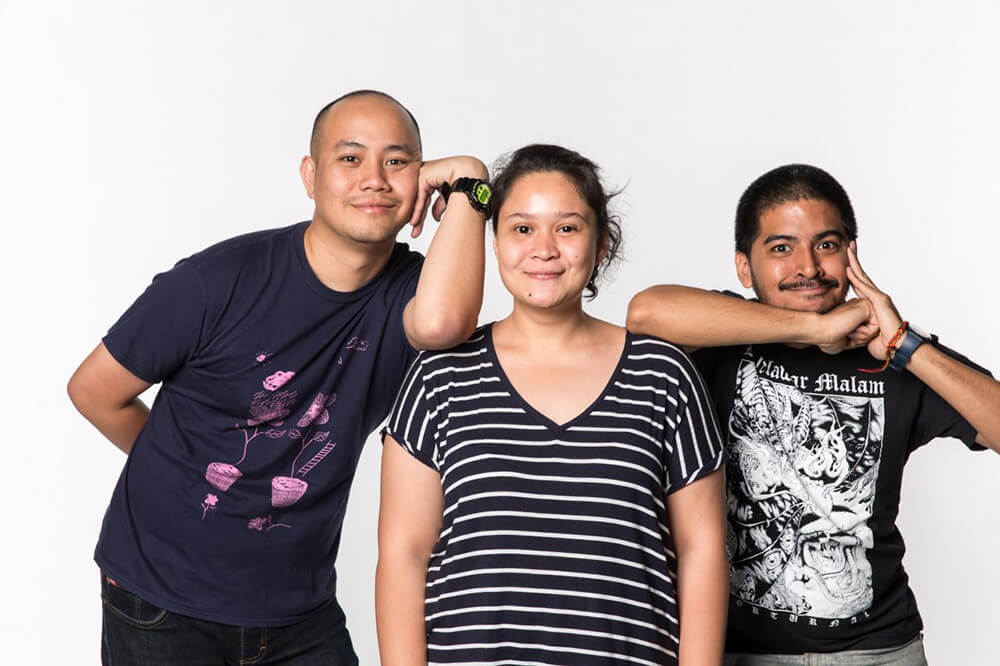 The trio met whilst studying at the Institute Technology of Bandung, which since the 90s and 2000s has been active in the support of video art and the city’s creative currents. Students in respectively graphic design, advertising and printmaking, the triumvirate came together for the “traumatic” creation of ‘Serigala Militia’ (2006) – a stop motion animation film (4 min 22 sec) made of hundreds of woodcut plywood boards, flashing in speeding sequence to the beats of Seringai, an Indonesian hard rock band. Acting as a music video but presented simultaneously as an installation, this meeting of minds framed the collective’s energetic and intricate, yet playful and pulsating practice.
Widely playing with stop motion animation in works such as ‘Bdg Art Now’ (2009), ‘Watt?!’ (2010), ‘Pilgrimage’ (2011) and ‘The Lost One’ (2013) it was ‘*Ting’ back in 2008 that marked the trio’s first step in this practice. A video that follows the travelling adventures of a collection of porcelain tableware, it presents in rhythmic formation and ballet-esque movements, the elements’ aligned tittering to the tones developed by Bagus Pandega. A touching animate play on human-like formations, the work parallels our individual yet collective journeys through the playful use of everyday domestic objects, which in turn are active players in the rituals of our everyday life.
Tromarama’s body of work extends beyond stop motion animation though, and even video art. ‘Borderless’ (2010), for example, comprises a video made of embroidery on canvas, whilst ‘Tugu Lentera Listrik’ (2013) is composed of a single channel video and digital print on sticker. These works still play with the commonplace though and the domestic, from a craft-like past time to the creation of an everyday domestic interior that in one small screen portion comes to life. ‘Private Riots’ (2014) marks, however, a political leaning in its playful pop-like extractions of key images from protest banners; time, marching, speeches are represented by centered images on boards that as an installation tower at an imposing height, standing in tall yet approachable opposition. Alongside, an interactive post-it board invites passers-by to mark and share their own frustrations or commentary.
At the heart of Tromarama’s practice is the creation of an inclusive narrative through the use of form and colour, objects and figures, sounds and rhythms. Each work literally animates the ordinary and weaves its existence into a tale of tribulations fuelled by consequence. As such, their work infuses the ordinary with novel means of contemplation in the context of urban life, developments and political reverberations.
Tromarama are widely considered one of Indonesia’s most exciting rising talents and have been exhibited around the world. They have held solo exhibitions at the Stedelijk Museum (Amsterdam, 2015), National Gallery of Victoria (Melbourne, 2015) and Mori Art Museum (Japan, 2010), amongst others. Group exhibitions include the Frankfurter Kunstverein (Frankfurt, 2015), Samstag Museum of Art (Adelaide, 2014), APT 7 QAGOMA (Brisbane, 2012) and Singapore Art Museum (Singapore, 2012).