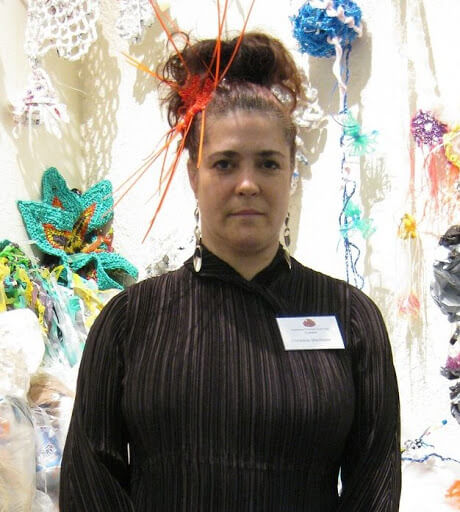 Christine Wertheim is a poet, performer, critic, curator, crafter and collaborator teaching at CalArts. She has eight books including three poetic suites, The Book of Me, mUtter-bAbel, and +|’me’S-pace; experiments in auto-bio-graphy fusing graphics and text to explore the potentialities of the English tongue. In performance these become a unique form of S(w)Ound poetry.
Her edited anthologies, Feminaissance, The n/Oulipean Analects, and Séance were produced from a series of seminal literary conferences funded by an Annenberg Foundation grant, and co-produced with Matias Viegner at REDCAT and MOCA, LA, between 2004 and 2010. These gathered over 120 experimental writers from the US, Canada and Europe to explore various themes, including, (in)-formal constraints, sex writing, 21st century feminism, communality and collaboration in literary life.
Her poetry is anthologized in Against Expression, The & Now Awards: The Best Innovative Writing, I’ll Drown My Book, The LA Telephone Book, and [out of nothing]. She has held residencies at Los Angeles Contemporary Exhibitions and the Institute For Figuring. Her critical pieces on art, literature and aesthetics, have appeared in Cabinet, X-tra, n.paradoxa, ‘Patacritical Interrogation Techniques, BOMB, and Entropy, amongst others. She is currently an invited commentator for the international online literary journal Jacket 2. Essays on science and pataphysics, punk performer Johanna Went, and the poetic body, are forthcoming. Prior to CalArts she taught in London at the Department of Visual Art at Goldsmiths College, and at the Slade School of Fine Art. She has a PhD in literature and philosophy from Middlesex University, UK.
With her sister Margaret, Christine co-directs the Institute For Figuring, a non-profit organization exploring the aesthetic dimensions of science, math and engineering. The IFF has had solo shows at UCSC, the Museum of Art and Design NY, NYU Abu Dhabi, the Smithsonian, Science Museum Dublin, Hayward Gallery London, Museum Kunst der Westkust Fohr, Art Center Pasadena, Track 16 LA, and the Chicago Cultural Center amongst others; recent group shows are at Mass. MOCA, and the Jewish Contemporary Museum, SF. The IFF has received numerous grants, from the Andy Warhol Foundation, the Annenberg Foundation, the Orphiflamme Foundation, and others. The sisters’s awards include, the 2011 Theo Westenberger Grant for Outstanding Female Artists from the Autry National Center, and the 2016 AxS Award for Contributions to Art and Science from the Pasadena Arts Council.
Their 2015 book Crochet Coral Reef documents an eleven-year project of which Donna Haraway has said, “The CCR is an SF story of string figures, science fact, science fiction, stitched fantasies and speculative fabulation…[that] opens up still possible times for flourishing on a diverse earth.” The work has been widely cited by feminist and queer scholars as an exemplar of queer sympoesis