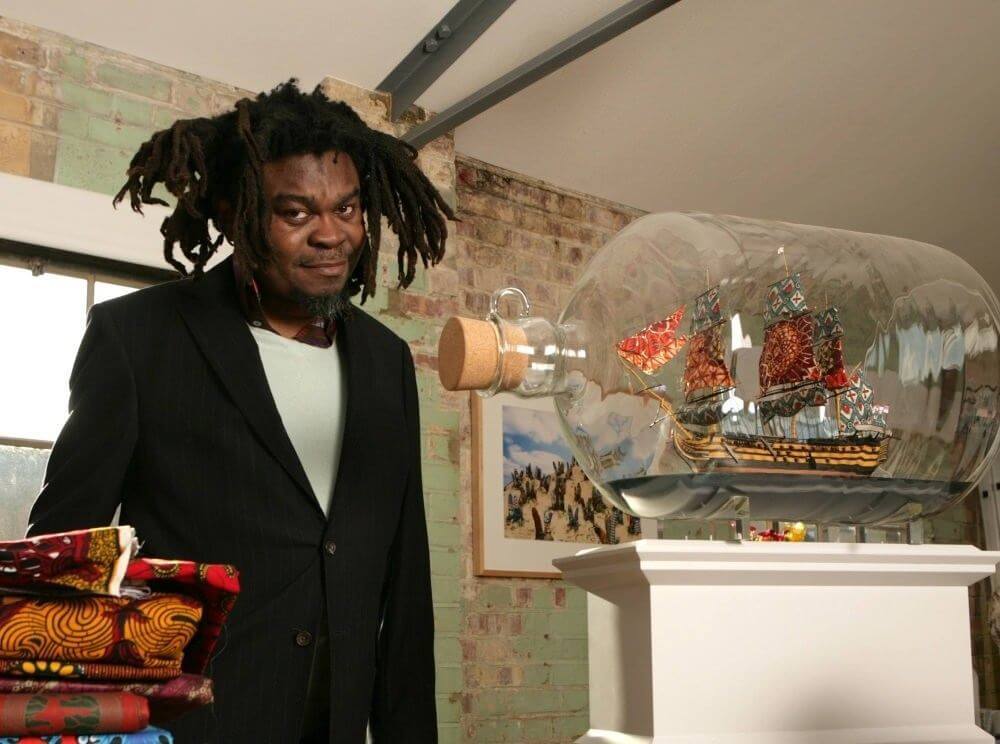 Yinka ShonibareMBE was born in 1962 in London and moved to Lagos, Nigeria at the age of three. He returned to London to study Fine Art first at Central Saint Martins College and then at Goldsmiths College, where he received his MFA. Shonibare’s work explores issues of race and class through the media of painting, sculpture,photography and film. Having described himself as a ‘post-colonial’ hybrid, Shonibare questions the meaning of cultural and national definitions. His trademark material is the brightly coloured African’ fabric he buys at Brixton market. The fabric was inspired by Indonesian design, mass-produced by the Dutch and eventuallysold to the colonies in West Africa. In the 1960’s the material became a new sign of African identity and independence. Shonibare was a Turner prize nominee in 2004, and was also awarded the decoration of Member of the “Most Excellent Order ofthe British EmpireorMBE, he has added this title to his professional name. He was notably commissioned by Okwui Enwezor at Documenta 10 in 2002 to create his most recognised work Gallantry and Criminal Conversation that launched him on to an international stage. He has exhibited at the Venice Biennial and internationally at leading museums worldwide. In September 2008, his major mid-career survey commenced at the MCA Sydney and then touredto the Brooklyn Museum, New York and the Museumof African Artat the SmithsonianInstitution, Washington DC.Shonibarehas also been elected as a Sculptor in the Royal Academy of Arts, making him part of a select society of at most 80 practicing artists working in the UK. This honour, historically a way to distinguish an artist as a professional in Britain, is the art community’s recognition of the significance of Shonibare’s work. In 2012, the Royal Opera House commissioned Globe Head Ballerina to be displayed on the exterior of the Royal Opera House, overlooking Russell Street in Covent Garden. The life-sized ballerinaencased within a giant ‘snow globe’ spins slowly as if caught mid-dance. The piece appears to encapsulate a moment of performance as if stolen from the stage of the Royal Opera House. Shonibare’s work,Nelson’s Ship in a Bottle,was the 2010 Fourth Plinth Commission, and was displayed in Trafalgar Square, London, until January 2012. It was the first commission by a black British artist and was part of a national fundraising campaign organised by the Art Fund and the National Maritime Museum, who have nowsuccessfully acquired the sculpture permanently for display outside the museum’s new entrance in Greenwich Park, London. In 2013, a permanent public commission of Wind Sculpturewas unveiled at Howick Place, London, England. A Wind Sculpturewas also shown as part of a solo exhibition at Royal Museums Greenwich in September 2013 and at Frieze Sculpture Park in October 2013. Recent solo exhibitions include Wilderness in the Garden (2015), Daegu Art Museum, Daegu, South Korea; Colonial Arrangements(2015), Morris-Jamel Mansion, New York, NY, USA; Egg Fight(2014), Foundation Blachère, Apt, France; Yinka Shonibare MBE: Magic Ladders(2014), The Bares Foundation, Philadelphia, PA, USA; and Cannonball Paradise(2014), Gerisch Stiftung Sculpture Park, Neumünster, Germany. Recent notable group shows include In Search of Meaning: The Human Figure in Global Perspective(2015) Museum de Fundatie, Zwolle, the Netherlands; Staying Power: Photographs of Black British Experience 1950s–1990s(2015), Victoria & Albert Museum, London, UK; The Divine Comedy: Heaven, Purgatory, and Hell Revisited by Contemporary African Artists(2015), Frankfurt MMK, Frankfurt, Germany; and later exhibited at Smithsonian National Museum of African Art, Washington, D.C., USA.Shonibare’s works are included in prominent collections internationally, including the TateCollection, London; Victoria and Albert Museum, London; National Museum of African Art,Smithsonian Institute, Washington, D.C; Museum of Modern Art, New York; National Gallery ofCanada, Ottawa; Moderna Museet, Stockholm; National Gallery of Modern Art in Rome, Rome.

Exhibitions
Diaspora Pavilion
On the occasion of the 57th Venice Biennale, International Curators Forum (ICF) and University of the...
13 May 2017 - 26 Nov 2017
Palazzo Pisani Santa Marina
Venice