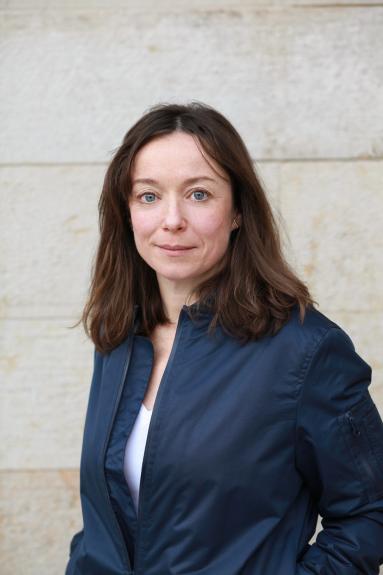 The art historian and curator Franciska Zólyom has been the director of the GfZK (Museum of Contemporary Art) Leipzig since 2012. From 1997 to 1999, she worked as a curator at the Ludwig Museum of Contemporary Art in Budapest. After an internship at the Hamburger Bahnhof – Museum für Gegenwart in Berlin (2001 and 2003/04), she became the director of the Institute of Contemporary Art – Dunaújváros, Hungary. Here she worked with international artists such as Gilbert Hage, Tamás Kaszás, Tilo Schulz, Sean Snyder and Technika Schweiz, initiating numerous site-specific and context-related exhibitions and research projects. The projects City Without a Center and Stalking Utopia reflect her interest in the spatialisation of ideologies. As a freelance curator she curated the exhibitions Agents and Provocateurs (with Beáta Hock) on the subject of artistic expressions of protest and Lajos Kassák. Botschafter der Avantgarde (with Edit Sasvári). At the GfZK she has curated the following exhibitions, among others: Little Warsaw: Battle of the Inner Truth and Dainius Liskevicius: Museum (2012); James Langdon: School for Design Fiction (2013); Creativity Exercises (with Dóra Hegyi and Zsuzsa László) (2014); Experimental Jetset: Provo Station (2016); Céline Condorelli: Wall to Wall (2017); Gaudiopolis. Attempts at a Joyful Society (in cooperation with the OFF Biennale Budapest) (2018). In addition to holding various honorary positions, she is committed to the development of educational and cultural policies.
She is curator of the German Pavilion at the Venice Biennale 2019