Oscar Murillo show in Venice is the culmination of ten years of Frequencies, a collaborative project that began in 2013 and has collected canvases drawn by students from 400 schools in 30 countries. The research of similar images and symbols made by the students has become the pattern for new canvases and for multiple digital and social projects.

“A storm is Blowing from Paradise”, is the title of this immersive show that brings you back to Venice where you had your works exhibited during Okwui Enwezor’s Biennale in 2015. The sentence is taken from the text “Angelus Novus” by Walter Benjamin. What does this title mean to you and in relation to this show?

I think the title consolidates and gives body to all the different layers that I’m bringing together in these two spaces. If we think about Frequencies as being a message or messenger from the future, a project that started 10 years ago, there is a clear relation to time, to geography, sedimentation and to movement. The passage from Walter Benjamin “Angelus Novus” encapsulates poetically that dimensional reality, particularly of a project like frequencies. This idea of the storm, of tragic turbulence, are represented here through the black canvases on the first floor. I don’t see these black canvases, as these kind of “clouds”, in a negative way, but the black canvases are a sort of “institut of reconciliation”, a collective endeavor that has been in many countries, many shows, many geographical realities and has a parallel existence to Frequencies, it is almost as if they have their own space, but they are growing together side by side. The title brings all these floating ideas; in poetry, in history and in philosophy together and gives them coherence.

This show is a culmination of ten years of Frequencies, a collaborative project that began in 2013 which has collected canvases drawn by students from 400 schools in 30 countries. The research of similar images and symbols made by the students has become the pattern for new canvases… What was the intention of Frequencies when it began 10 years ago and how has it evolved since its start, were there any moments of crisis of change?

Frequencies has evolved thanks to the children and their participation and thanks to my people in the studio that have worked very hard traveling around the world to both distribute it and install it. There was never really a crisis, the crisis was manifested by the world with the pandemic, and it was in turn it became a crisis of education, with schools closed and the pandemic became a tool to reform the education system without any consultation. The crisis ironically was not so much about frequencies but about a crisis of education and creativity and that is a universal tragedy. What has changed are trends in society. The origin of Frequencies can be found in the origin of art, the big masters of art have occupied so much space that I thought I had no more space, but then I thought that a way to explore those interests and curiosities as an artist was not to copy or interpret, but to do this through cooperation; let’s collectivize, let’s look what could be possible in the context of drawing in our time and finding new materials. In this field you don’t find anything original, but you find courage and purity in being unfiltered and free to do without thinking, something instinctive. 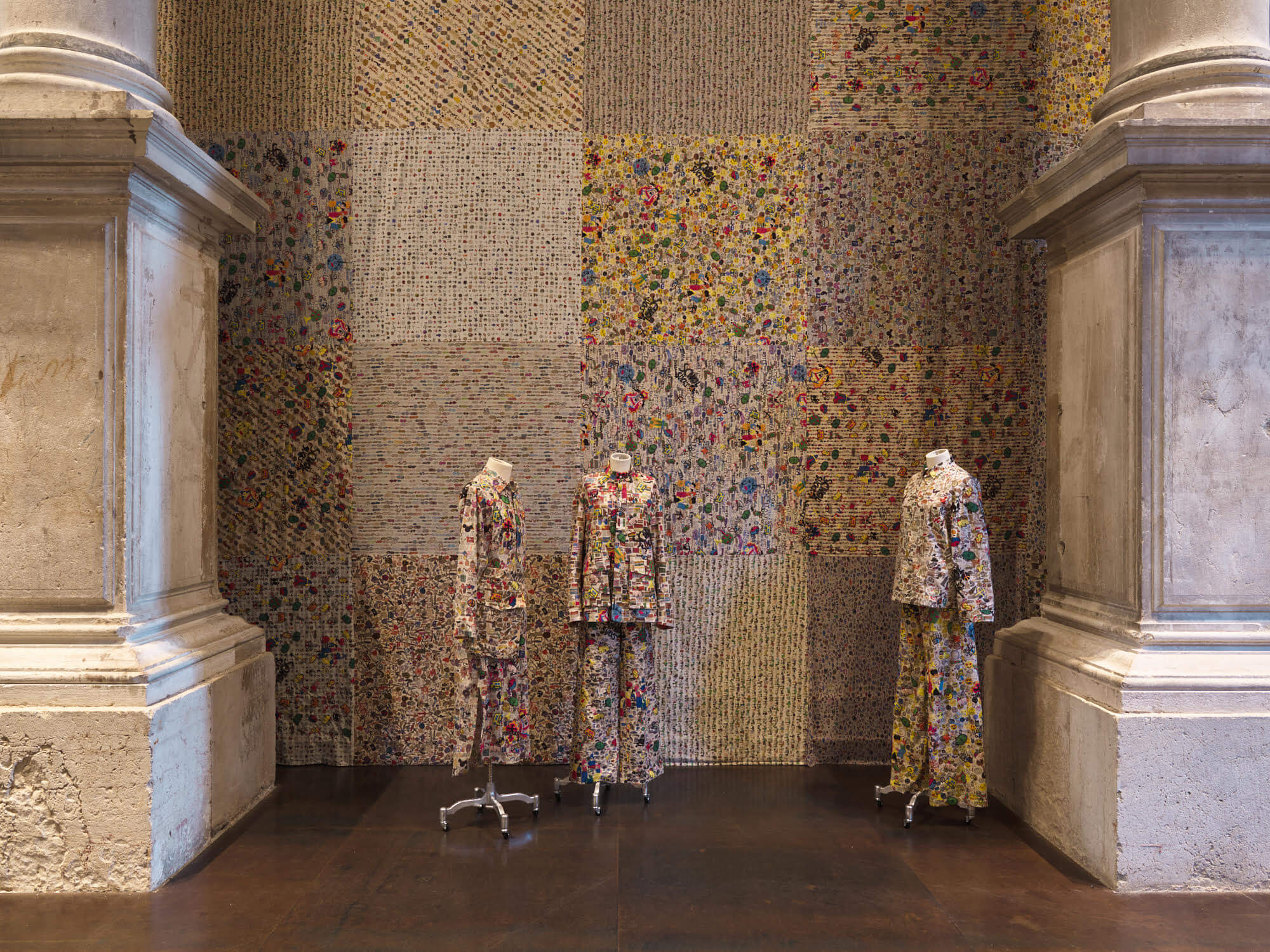 The sound installation in the show is immersive, we can clearly distinguish sounds of airplanes, schools and other ambient sounds, why did you choose this type of recording for the soundtrack of the show?

This is a really interesting question, because I think the sound opens up an inquiry into architecture, using artificial intelligence, using machine learning, you have an ability through sound and to make physical, because sound is very intrusive, you can’t control sound. So sound in the context of this project reveals and creates architecture. I think Frequencies is this tremendous library of possibilities, what you do with it is what brings it to life. The physicality of the shelving units and the canvases, and the piles, I think is very beautiful but it is also dead. What you do with it is like mining, experimentation is what brings it to the surface. Sound reveals architecture in relation to the school, how clean they are, where is the school? Did it have windows? Was it in the country side? Was it in the city? Sound opens up all these sensibilities.

Could you tell us about how the project “Arepa y Tamales” started and about the role that food plays in your artistic practice.

We have to go back 12 years, to the origin of the project: mark making, drawing, painting in this very basic, crude way, all this was the beginning of Frequencies in a way. It is to identify food as the essential foundation of life, it comes from necessity, so corn is a staple food, and it becomes in the show a symbol of identity. The rocks on the floor upstairs in this show are made from corn and clay and also refer to austerity and precarity. 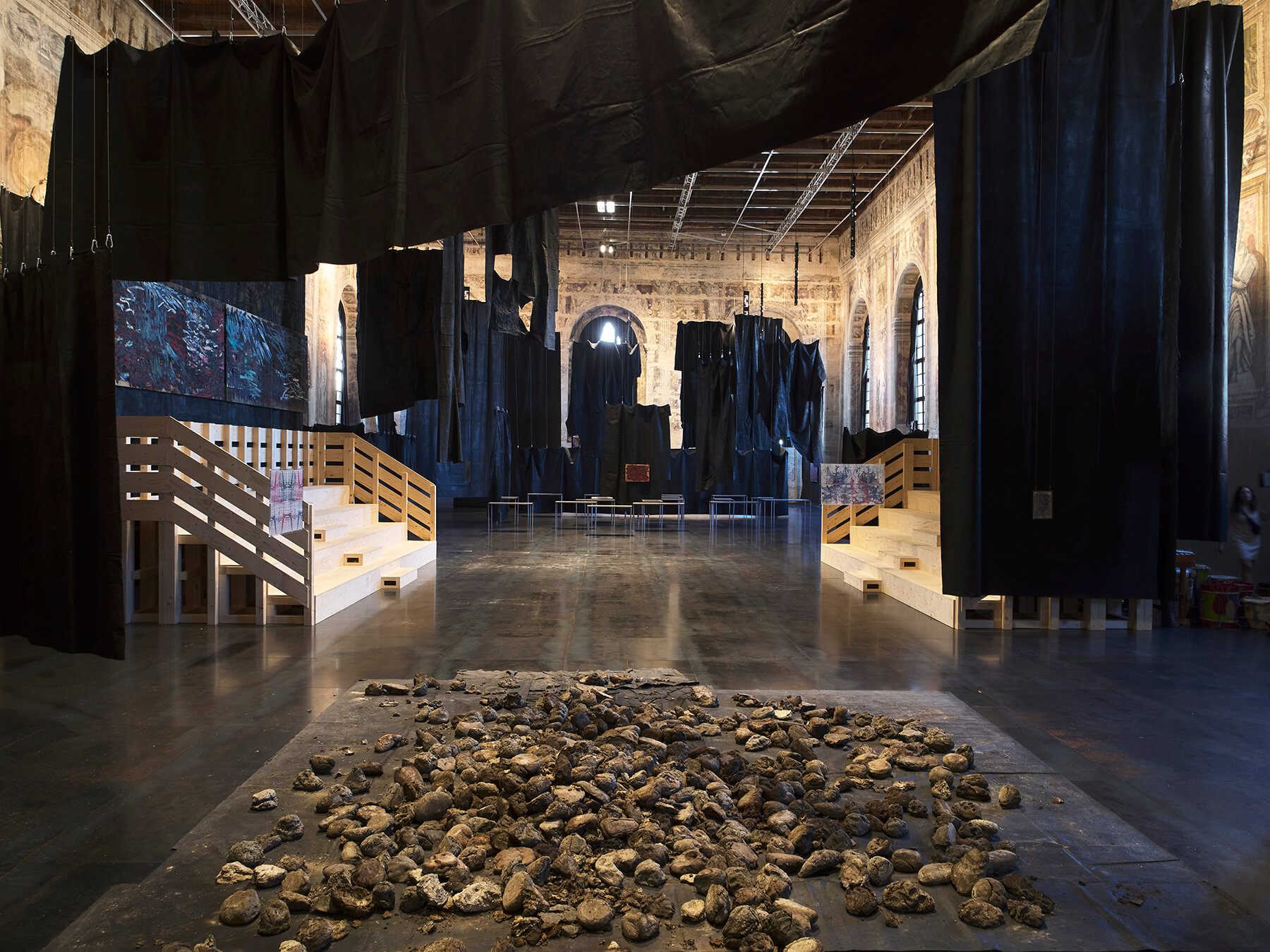 I was very impressed by the video room, I would like to ask you about the connection you see between the “Mateos” burning and the selected canvases from Frequencies project moving in the video following sound and the visitors movement.

The “Mateos” have a duality to them: initially, even before my intervention, come from folkloric cultural traditions, secondly they represent the precariousness of the human being, the precariousness of workers. They are very crude representations, simple papier maché made with this continuous desire to approach and play with different grounds and realities. So I thought, if the Mateos have now been burnt, what would be their new manifestation, with the team in studio we began doing research into the history of workers uniforms, from Russia to the Soviet Union to this idea of indigenous workers in the americas, back to the European context in the 18th Century to the modern worker. We basically fused all these different realities of the uniform, as a kind of garment, to the school as a kind of garment, arriving to what Frequencies is: the result of labour. Throughout the pandemic given that time began to mean something else, I decided to go through the archive and identify compositions, squared compositions, and with the artificial intelligence, asking questions to machine learning and tagging, we have created patterns and working with scientists we have created this interactive programme, and in the context of the show you find this cube of tapestry which is the result of these inquiries and the garment becomes this kind of new witnesses of the workers, of the puppets of Mateos, its like a kind of rebirth, after burning these papier maché figures and giving them a existence through Frequencies and through the idea of the worker as a kind of body. 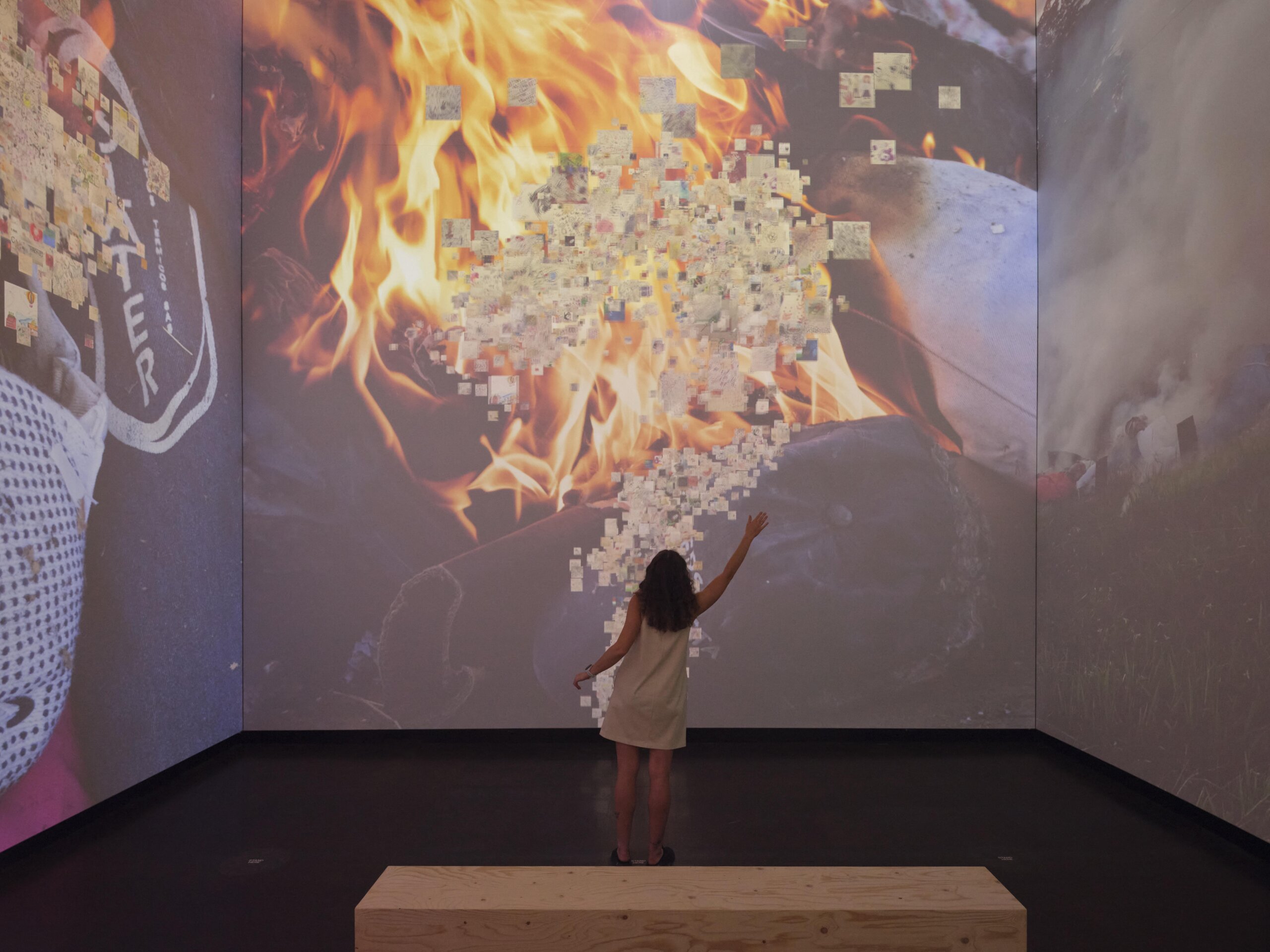 So we could say that in the show you build a relationship and parallelism between the primitive marks and the artificial intelligence.

Yes for me they become the same thing, these elements become full circle with a question mark. You can argue whether machine learning has the capability to be unconscious and to be pure, but you can also argue that a human being does not have the ability to be pure, the unconscious we can also wonder about. I guess even in the context of primitivism you could state that it’s a sophistication, but then sophistication becomes subjective, it is not a given and it’s not a unilateral reality, sophistication is subjective to what you believe to be civil.

The digital side of the project was an evolution, a speculation, if the human being is to become obsolete and not useful anymore and its all about machine doing everything, machines controlling every thing we do, then I want to push this idea further and potentially go to this idea of the unconscious, if we say that cave drawing was so essential in the evolution of the human being, then the next thing we have is AI, it is not even us anymore, so there is all this material here and Frequencies here become a world of sorts to question this evolution.

How is coming back to Venice and what will come next?

Let’s say Venice is not only the city of the Biennale, it’s also geographically the one of most democratic cities. If Frequencies is a project that belongs to the world and we want the world to participate, this was the right place to bring it. In my personal experience it has been easy to invite my collaborators in Colombia, who have never left Colombia, to Venice.
Venice is a city which connects different civilizations together. Regarding the future Frequencies is an ongoing project which will move forward and will continue seeking other outcomes. 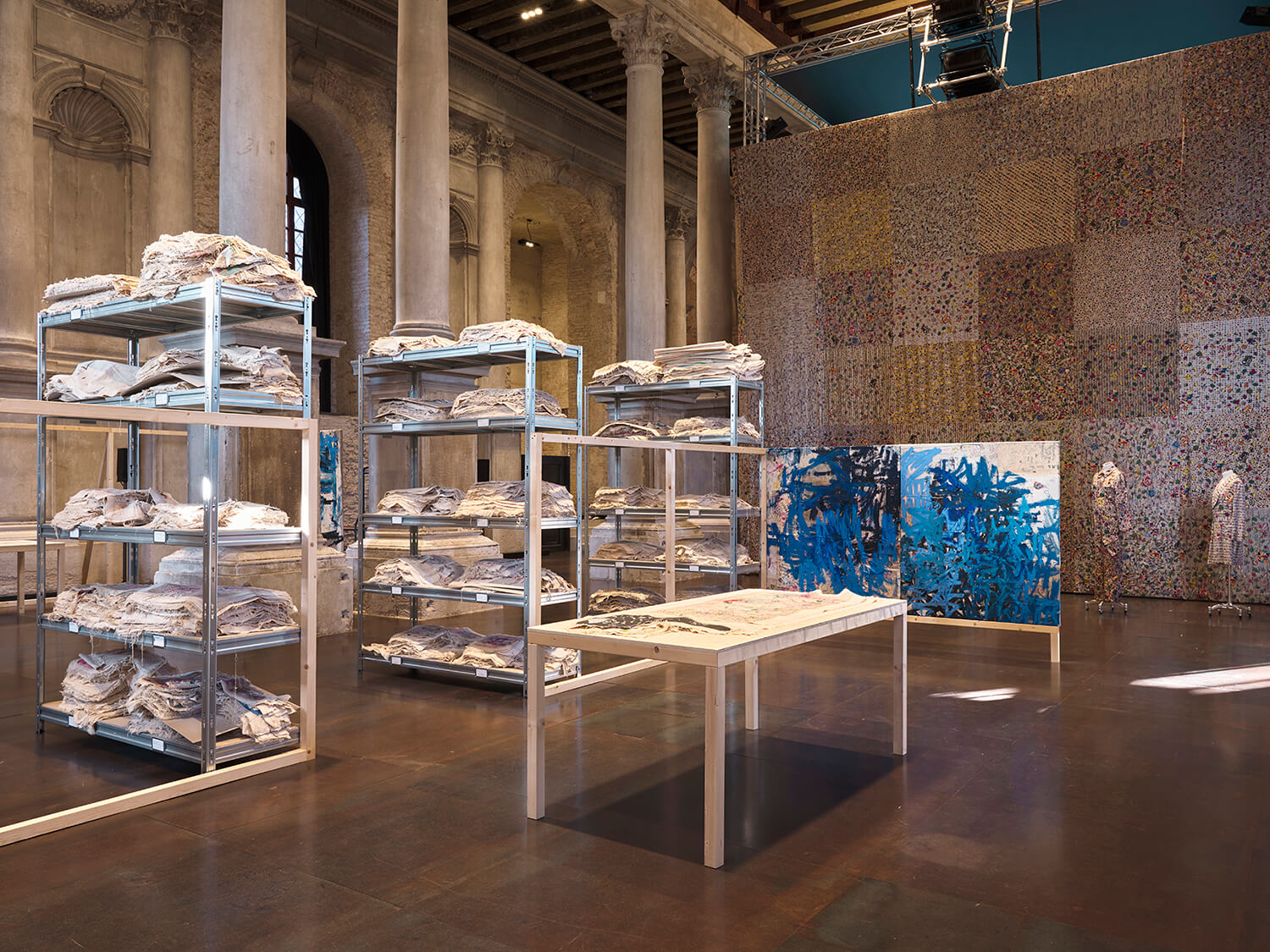